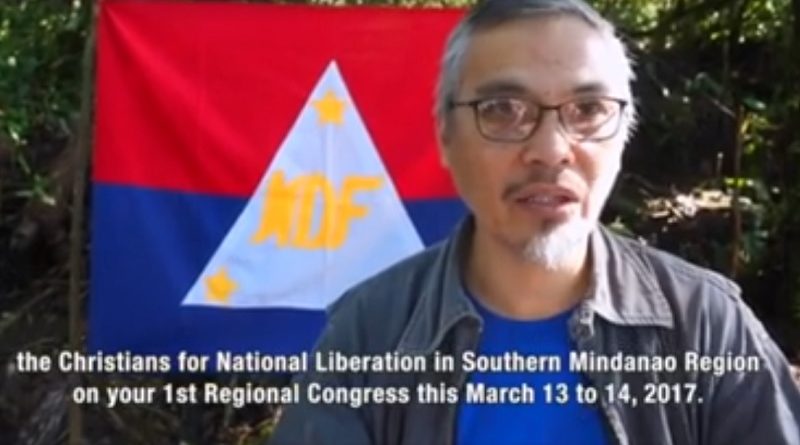 Solidarity message to the 1st Regional Congress of the Christians for National Liberation, SMR

The Southern Mindanao Regional Party Committee of the Communist Party of the Philippines extends its congratulations to all clergy and lay workers who participated in the 1st Regional Congress of the Christians for National Liberation in Southern Mindanao. We are inspired by the fervent revolutionary principle of the religious sector in wholly embracing the line of the national democratic revolution in order to prevail over the social evils of US imperialism, feudalism and bureaucrat capitalism.

On this momentous event, we remember and pay highest honours to the revolutionary martyrs from all religious denominations who have valiantly given their lives and served the revolution for the emancipation of the poor. We salute the selfless and emulative examples of Fr. Bert Salas, Wilfredo Galeto, Val Mante, Jr., Sr, Lita David, m.a., Bishop Ben Barloso, Pastor Tim Salem, Pastor Joy Manuales, Fr. Romeo Mapansa, Sr. Antonietta Go,RGS and Fr. Fausto “Pops” Tentorio, PIME.

This occasion could not come in a more opportune time. Firstly, at present, US imperialism, with Donald Trump at its helm, is fanning the flame of religious bigotry, national chauvinism, racism and a culture of hate to further segregate the world and prioritize imperialist economic and political interests. Despite his America-first hyperbole, Trump knows fully well that perpetuating US imperialism’s neoliberal policies around the world, with the attendant wars of aggression and Big Brother foreign policy, is the only means to survive in the quagmire of economic decline. We view this as fresh substantiation of US imperialism’s deterioration and we must work to further isolate and vehemently oppose its oppressive and exploitative machinations against all peoples of the world.

Secondly, the reactionary state presently being urgently consolidated by Rodrigo Duterte is nowhere near making good in his promise of “change is coming” rhetoric. Duterte’s administration is still being run by the gluttonous interests of big feudal lords, big comprador bourgeoisie in cahoots with foreign monopoly capitalism. The reactionary political arena is still reeking at the seam with inter-elite factions that claim to exact justice but are in fact merely an exercise in consolidation of the dominant ruling class in power.

There has been no change yet for the majority of the Filipinos. Workers are still being paid slave wages, pushed to the corner by eternal contractualization and made to work under subhuman conditions as imperialist lackeys in his administration lobby for the perpetuation of neoliberal economic policies. Peasants and farm workers are still being robbed of rightful ownership of their lands by the families of Lorenzo, Floirendo, Cojuanco, Aquino and other feudal lords. Lumads and other indigenous people are still being displaced from their ancestral lands by foreign large mining companies and export monocrop plantations.

Worst, the Duterte administration is actively promoting militarist approach to the roots of the civil war by mobilizing all of its armed forces to trample upon the rights of the poor and powerless. The Filipino people are currently being preyed on by the twin evils of Duterte’s anti-drug war and all-out war. In Southern Mindanao alone, thousands of families are being displaced while their communities and livelihoods are left to ruins by vicious artillery and aerial bombardments. Millions in the countryside are being victimized by relentless military operations that invariably leave cases of people’s rights violations. Civilians and legal activists are fast becoming collateral damage in the fascist campaign of the AFP, PNP and their paramilitaries to hit hard the revolutionary movement, especially the New People’s Army. Thousands all over the country have been extra-judicially killed under the auspice of the Oplan Tokhang.

While the Party, through the National Democratic Front of the Philippines, has been consistent in the spirit of negotiating in good faith, the Duterte administration has unswervingly flip-flopped in its obligations and pronouncements in the peace process. It engaged in various psywar and guillotine tactics; overhyping the development of the talks and the need for bilateral ceasefire and preconditioning the virtual surrender of revolutionary political power.

Finally, this congress of revolutionaries from the church people comes in the wake of the Party’s marching call to forge ahead from the middle to the advance sub-stage of strategic defensive and advance the people’s war to greater heights. It is in this context that the CNL must work ardently because we believe that the quest for genuine peace, one that is just and lasting, can only be achieved by waging national democratic revolution.

As revolutionaries, the religious must always bear in their collective consciousness the legacy of the CNL, that which is embodied in its rich history of actively being in the national democratic struggle to liberate the Filipino people from US imperialism, feudalism and bureaucrat capitalism. The CNL is one the frontliners that challenged and brought down the fascist Marcos dictatorship. Priests, pastors, nuns and laypersons faced the fascist Philippine Constabulary and the Philippine Army during the hamletting of the entire town of Laak in Compostela Valley in 1983. They rallied in the streets with the Movement for National Liberties to reject the US bases in 1991. Barely a decade later, they marched against the return of US military control in the country with the Visiting Forces Agreement and the Balikatan exercises. In the decade that followed, the CNL and its religious revolutionaries became staunch defenders of people’s rights—from the dispossessed Lumads of Talaingod, the robbed tillers of Arakan and Madaum and other agri-businesses, the peasants burdened by drought and fired upon by the reactionary state in North Cotabato, the poor who suffered during Typhoon Pablo, and many others. The participants of this year’s congress and those they will organize must claim in practice this historical role of the CNL.

In order to accomplish this, religious revolutionaries must always stand resolutely by and for the oppressed. They must be grounded and must do away with the Pharisaic notion of living separate from their flock. Just like in the time of Jesus and his apostles who were revolutionaries in the midst of the olden times’ version of imperialism—the tyranny of Rome—CNL members must reach out to their flock, struggle and fight the oppressors and ultimately offer their lives in the name of liberation and redemption. They must expose the ruling class’ proclivity to use religious faith to absolve their exploitation. The religious must understand that the present semi-colonial and semi-feudal system will never afford the poor and dispossessed the means with which to realize a humane existence devoid of exploitation and oppression. This being the reality, they must boldly involve themselves in the promotion and defense of people’s rights—in their parishes and churches, in the countryside, the factories, schools and in the streets.

Aside from reaching out to its flock, the CNL must at all times arouse and organize priests, pastors, nuns and other clergy and lay workers into the fold of the national democratic struggle. It must utilize its resources and means to continually increase the ranks of the religious who embrace the national democratic line and mobilize them to advance the welfare of the masses.

Religious revolutionaries must likewise diligently study Marxism-Leninism-Maoism and strive to apply its principles to their teachings and practice. They must quash the misconception being peddled by clerico-fascists and idealists that MLM and the Christian faith can never find common ground. Serving the people has always been the most important common ground that define both MLM and the Christian faith and made possible decades of close cooperation between revolutionaries and the religious. Meanwhile, exploitation, while a clear anti-thesis to Christian faith, has always been the common ground of the Pharisees and the ruling class.

The CNL must also continue its important role of raising the awareness and understanding of its flock and the rest of the world that the people’s war is the “preferential option of the poor.” The religious must vigorously elucidate that the poor wage a protracted war because the rich oligarchy have and are continuing to wage war against them, their children and their future.

The CNL must strive to shed light on the realities of the civil war and how the peace process, when correctly struggled, is a useful means to provide economic and social relief to the people. Religious revolutionaries must update the people on the development in the negotiations, and especially educate them regarding the agenda at hand—the socio-economic reforms (SER). In the main, there is an apparent lack of appreciation of the significance of the SER because the reactionary government’s only concern is to coerce the NDFP into a bilateral ceasefire. The CNL must strike down the liberal bourgeois and pacifist delusion that peace is merely the absence of war and can be attained without seriously addressing the roots of the armed conflict.

The CNL must mobilize support for the armed struggle and cherish the true army of Filipinos, the New People’s Army. It must help recruit Red fighters from its flock and prepare them for a higher form of struggle and serving the people. Ultimately, it must recruit from its ranks of priests, pastors, nuns and laypersons and follow the footsteps of other religious who have taken up arms and joined the ranks of Red fighters and commanders.

For 45 years, the CNL continuously proves itself the embodiment not only of faith but more so of true Christian action. By wholly immersing itself in the revolution, it stands alongside all the other mass organizations and alliances in overcoming and defeating decades of fascist attack and repression. This is so because the CNL unwaveringly recognizes the leading role of the Communist Party of the Philippines and the socialist perspective of the national democratic revolution.

Let the historical mission of the revolutionaries in the church be a beacon burning ever bright as we march forward to our socialist future!