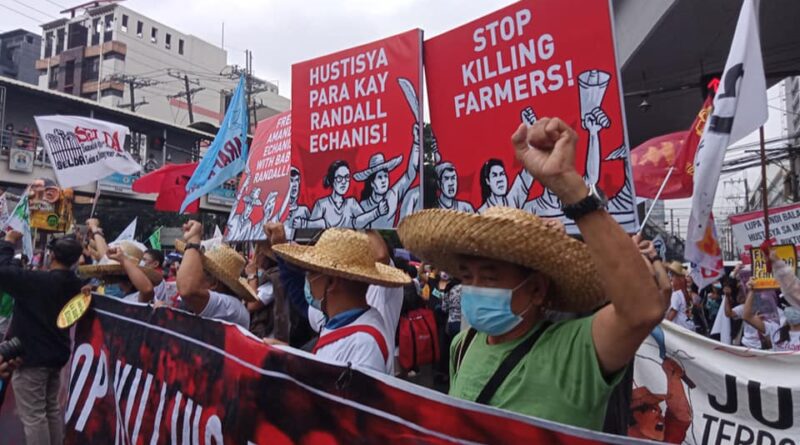 On the occasion of Peasant Month this year, the National Democratic Front in Southern Mindanao pays tribute to the Filipino peasantry, whose struggle to break free from feudal bondage continues to inspire the protracted people’s war even in the face of deteriorating socio-economic crisis made worse by the Covid-19 pandemic and intensifying negligence, corruption and fascism of the US-Duterte regime.

More than five years into the worst reactionary regime since the US-Marcos dictatorship, the masses of peasants, peasant workers, and indigenous people never experienced Duterte’s grandiose promise of “change” but only extreme suffering with the perpetuation of exploitation and oppression of the semifeudal and semicolonial society.

In the simple words of the peasant masses, Rodrigo Duterte had been a pest for three years since 2016 and a virus worse than Covid-19 for the last two years. He actually aggravated landlessness, consolidating landlord power in haciendas and agri-plantations and serving imperialist economic interest by implementing neoliberal policies in the agricultural sector. Years of refusing to carry out genuine agrarian reform such as free land distribution and comprehensive production assistance worsened the socio-economic plight of the peasant masses when the Covid-19 pandemic ravaged the country.

As the public health crisis raged on, lockdowns and restrictions fractured agricultural supply chains and markets, exacerbating the parasitic tendencies of the big landlords and bourgeois compradors who bled the peasants dry with more creative ways to extract profit from farmers and farmworkers. Poor peasant families struggled to eke out a living while landlords and compradors in the agricultural export industry saw their incomes and wealth skyrocket, others even becoming millionaires and billionaires, during the pandemic.

The US-Duterte regime, through its Department of Agriculture, railroaded the commercial distribution of golden rice on June this year, completely shifting the control of seed propagation from local farmers to transnational agro-chemical companies, which already amassed billions of dollars in privatizing seed supply and agricultural inputs. Moreover, the effects of the Rice Tariffication Law continue to devastate incomes of rice farmers, forcing them to sell their produce at an all-time-low of around P7 to 10 due to the influx of cheap imported rice. They are caught in a spiral of unpaid debts as production costs increase while the price of their products continue to drop.

Amid the pandemic, the Duterte regime’s criminal negligence and unbridled corruption capitalized on the economic suffering of the Filipino peasantry. Hundreds of billions pesos supposedly appropriated for social amelioration of the poorest Filipinos were pilfered by Duterte and his cronies. In Southern Mindanao, nineteen (19) months into the pandemic, thousands of peasant families, especially in the hinterland areas, report that they never received even a single centavo from Duterte’s social amelioration program (SAP). Those who did say that they only received the amount of P1,000 to 2,000 of the promised P5,000 to P8,000. Others report that they were only ever given a few kilos rice, a couple of cans of sardines and packs of instant noodles.

Investment scams have also recently resurfaced, especially in Davao region, preying on peasant families who were enticed to part with their hard-earned money for a promise of high return. It is curious to note that the previous investment scam of 2018 that rocked the region and stole millions of pesos mostly from peasant families also happened the year before the reactionary mid-term elections which installed Duterte’s minions in the local and national bureaucracy.

As an added bonus, the juggernaut of Duterte’s fascist counterinsurgency machinery has made being a civilian in the rural areas a living hell for farmers, farmworkers and Lumad in the region. Their lives and communities suffer under the barrel of the AFP’s gun, which more often than not are trained squarely on them. Incidents of aerial attacks and bombardments have become commonplace, as detachments and abusive troops under the retooled community support program (RCSP) terrorize peasant and Lumad communities in vain attempt to “defeat insurgency by yearend.”

In February this year, AFP troops summarily killed a local farmer and two staffers of a demo-farm for sustainable agriculture in Pres. Roxas, North Cotabato. A total of 277 farmers have been killed nationwide by Duterte’s fascist armed forces since mid-2016, not to mention the thousands of cases of harassment and intimidation, forced surrender, hamletting and other abuses as a result of the focused military operations in the countryside. Indeed, Duterte kills our farmers in two-pronged way: through hunger and penury and through all-out war in the name of counterinsurgency.

It is therefore adding salt to an open wound that the 10th Infantry Division has the gall to prophesize that the AFP’s fevered creation of hundreds of “ federated people’s organizations” will eventually spell the defeat of the revolutionary movement in the region or anywhere else in the country. These “POs” have been formed by herding together farmers and Lumad under duress, on the basis of populist and meaningless taglines as “peace and order” and without concrete programs to address the root cause of landlessness, poverty and other socio-economic issues. Peasants and Lumad around the region are dismissing these so-called POs as a complete waste of their time and public resources.

The Filipino peasantry holds the US-Duterte regime responsible for all the suffering and injustice that plague the country. They resist Duterte’s tyranny in a myriad of small and big ways. They vow to make him and his fascist mercenaries pay for his crimes when he steps down from power, manage to cling to it in some nefarious way, or even when he pulls all strings in order to rig the reactionary elections next year and install a stooge in his place.

Through their consolidated mass organization Pambansang Katipunan ng mga Magbubukid, Filipino peasants will take advantage of the reactionary elections to seize victories in line with the minimum and maximum demands of the revolutionary land reform. Most of all, they will continue to support and join their genuine peasant army, the New People’s Army, whose tempered Red fighters and commanders have made living though more than five years of Duterte hell not only bearable but ripe with lessons and experiences that have made them all stronger, and continue to make the countryside a very fertile soil for the revolution.