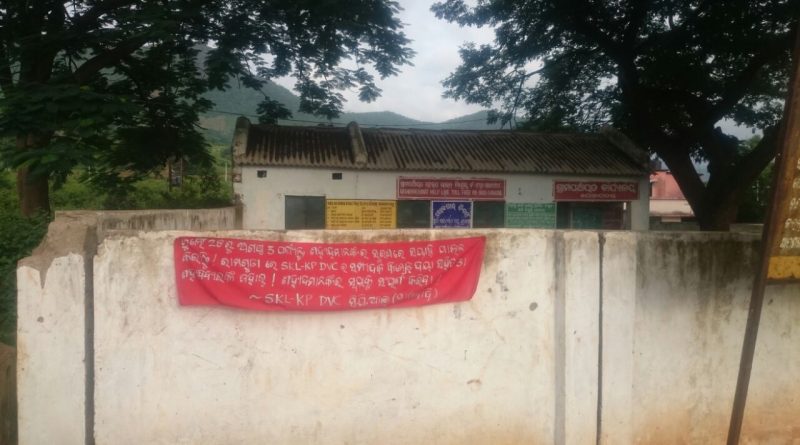 Narayanpatna: Maoists have resumed putting posters and banners at different places here including Podapadar panchayat office and on Janjabati river bank in Koraput district. In a latest poster, the comrades appealed to people to extend support to the martyr’s week from July 28 to August 3.

The posters appeared just a stone’s throw away from the BSF camp near Podapadar in the district.

Remembering the father of Naxalism, Comrade Charu Majumdar whose death anniversary is on July 28 and Comrade Kanhai Chaterjee, a founder member of Maoist organisation,the banner in the name of Koraput-Srikakulam division also asked tribals to pay homage to slain 31 cadres of the outlawed outfit in police encounter in Chhattisgarh in October. Notably, division secretary Daya and other top leaders heading Malkangiri and Narayanpatna areas were among the slain rebels.

They asked the tribals to take the revolution forward against the ‘dictatorial government’.

A similar banner was found yesterday at Talagumandi village here with same appeal.

The Kalahandi-Kandhamal-Boudh-Nayagarh (KKBN) division of the outlawed outfit had put posters on a tree in Kalahandi district two days ago urging people for a mass movement against police encounter at Bilabaru and Gumudumaha.