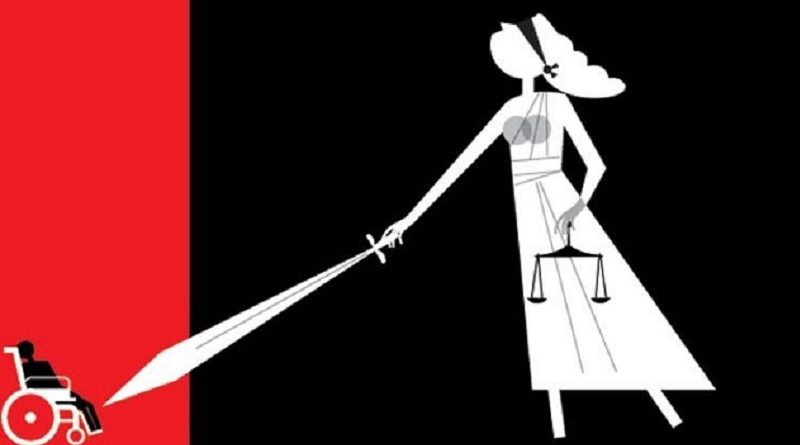 Revolutionary Democratic Front is not a frontal organization of CPI (Maoist) and it is not a banned organization in Delhi, Maharastra and certain other states.

The sessions and district court of Gadchiroli dist of Maharastra has pronounced its judgment against Prof. G.N. Saibaba and five others on 7th March, 2017 under heavy bandobast of armed police. Uniformed armed police with AK-47 like sophisticated weapons were allowed into court hall also where the public hearing of the court is supposed to take place. From the side of accused only the blood relatives were allowed besides the defense lawyers.

The judge has pronounced the judgment at 3 PM saying that he found the ʹaccused guiltyʹ and by 5 PM copies of 827 pages bound judgment in English were handed over to the accused, the defense lawyers and the prosecution. The court refused to allow even the earlier orders given by it regarding Prof. G.N. Saibaba to have his medicines, fruits etc. saying that the prison authorities will look after everything. This pre determined prejudice against G.N. Saibaba can be read in the judgment itself. It says that ʹthough G.N. Saibaba is 90 % disabled, he is mentally alertʹ.

The fact is 2 ½ years of prolonged incarceration in Anda cell in high security central prison Nagpur has caused further detariation of Saibabaʹs health. Six months spell of his life on bail in Delhi earlier till December 2016 and after ten months between April 2016 and March 2017 most of his time was spent in super specialty hospitals in Delhi and Hyderabad for multiple ailments he was suffering with not only as outpatient, but also being admitted. Even with this precarious health he had to attend the trial traveling hundredʹs miles from Delhi to Gadchiroli, except during dispensation of attendance. Particularly this time earlier to his travel on the day of judgment he was in the hospital admitted for chest pain. In the test it was found that his Pancreas has damaged in gall bladder, and he is to be operated in three weeks. The doctors advised him not to travel and take rest till then.

Even the case of Hem Mishra is not different. At the time of his arrest in Ballarshah, he was to go to Prakash Ampteʹs hospital in Gadchiroli district for the treatment of his injured and disabled hand. His incarceration is longest among this six accused. He was also tortured heavily in illegal custody for about a month along with Prashant Rahi.

Not to speak of the three Adivasi accused who were always the victims of ill treatment, abused and physical torture illegally by the police outside and also by the authorities in the prison.

It is not to say that this health report is to be considered on humanitarian grounds by the court but only to register the protest against the extra legal observation of the judgment.

The judgment also sits on judging the Maoist ideology, CPI (Maoist) programme and its political perspective. For that matter the whole judgment of 827 pages has not relied on any legal grounds to give conviction, but completely prejudiced and motivated. That is why it has given life imprisonment to five people and ten years rigorous imprisonment to Vijay Tirke under UAPA, and this is while not giving sentence under 120B, i.e. criminal conspiracy. Where no criminal offence is shown by criminal conspiracy under 120B how come waging war is proved?

The judgment repeatedly says that these people are the members of CPI (Maoist) and also maintain contacts with the Party and where trying to meet the Party, which is banned. So for having membership, relationship has been considered as a crime eligible for life imprisonment. It goes against the resent judgments of Supreme Court one in Arup Bhuyan case and other the judgment given by Justice Markandeya Khatju. In both these judgments propagating an ideology of a banned organization or membership cannot be considered as crimes unless the accused are involved in any violent action, criminal offence under Indian penal code. The sessionʹs court heard and noted these judgments referred by the defense counsel and mentioned in its judgment, but it said that doesnʹt apply here without substantiating it.

Along with the CPI (Maoist) all through, the judgment brands Revolutionary Democratic Front also a banned organization and it says Saibaba is a active member of RDF.

At the outset RDF is not a frontal organization of CPI (Maoist). It was formed in 2005 and it held its first conference in Hyderabad in April 2012, and in August 2013 RDF is banned under AP Public Security Act in undivided Andhra Pradesh. It is challenged in AP High Court. So far the High Court Three Member constitutional bench was formed twice but could not continue to sit for hearing. So it is pending in AP High Court.

RDF is banned in 2006 in Orissa and challenged by Dandapani Mohanty, Executive Member of RDF in the court of Law. Recently the Supreme Court has directed the High Court of Orissa to here this petition of Dandapany Mohanty challenging the ban. It is in High Court of Orissa for hearing.

It is not banned under 124A Sedition Act or under UAPA. Not banned in Maharastra, where the case is registered nor in Delhi, where G.N. Saibaba, Hem Mishra live. In other states also it not banned.

The Public Prosecutor was responding on the judgment with an observation that it is first time the white collar Maoists are punished, and it is message to the intellectuals outside who are supporting the Maoist ideology. This is the mindset of State. Hence one has to come to the conclusion that this is not judicious judgment based on the natural justice or law of the land, but given with the political prejudice against any kind of dissent against the State. For this the court used the draconian UAPA instrument as against Indian Penal Court and the Fundamental Rights enshrined in the Indian Constitution.

In fact the judgment establishes the conviction of RDF that the democracy in letter and spirit can be achieved only through the revolution by the broad masses of the people.

Let us also fight to withdrawal of the draconian UAPA itself.