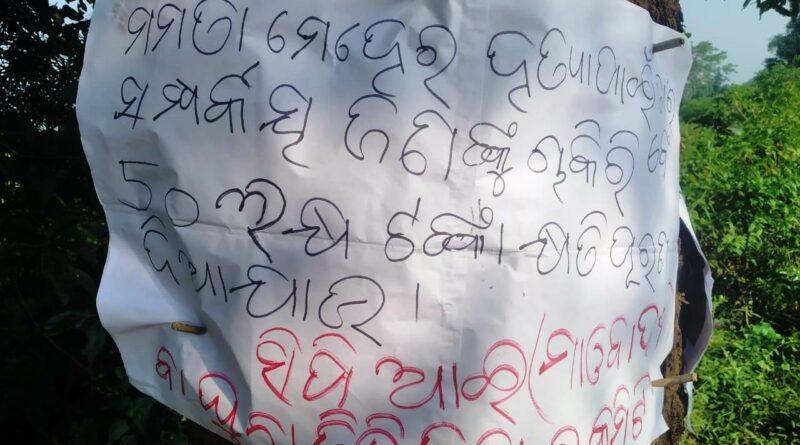 Rayagada District, October 26, 2021: CPI (Maoist) posters have surfaced in Kumudabali village under Muniguda police limits in Rayagada district on Tuesday. The Maoist party have criticized the authorities handling of the murder case of Mamita Meher.

Reportedly, the Maoist posters were placed at five locations in Kumudabali village.

The Baghuna divisional committee of the CPI (Maoist) has demanded a high level investigation and to give justice to the deceased’s family by punishing the accused. They have also demanded that the next kin of the deceased to be given a job opportunity and Rs 50 lakhs compensation to the family.

The Maoists have also demanded the resignation of Chief Minister Naveen Patnaik.

It is to be noted here that Mamita was a teacher of Sunshine English Medium School at Mahaling under the Sindhekela Police limits of the Kalahandi district. It is alleged that she was aware of the extramarital affair of Govinda Sahu, the president of the institute. Due to this, he had a grudge against her and in order to take revenge, he decided to eliminate her.

Govinda killed Mamita inside his car while they were en-route to Kegaon from Bhawanipatna on October 8. Thereafter, he burned the body using cardboard and tires in a previously dug pit at the mini stadium and covered it the next day morning.

He was detained by the police based on a complaint filed by Mamita’s family members. However, he had escaped from the police custody. Later, he was nabbed from Budhipadar village under Bangamunda block in Balangir.

The Balangir police produced Sahu before the Bangomunda JMFC Court after the completion of his remand period. The court sent him to the Kantabanji sub-jail as the police did not seek further remand of the accused.