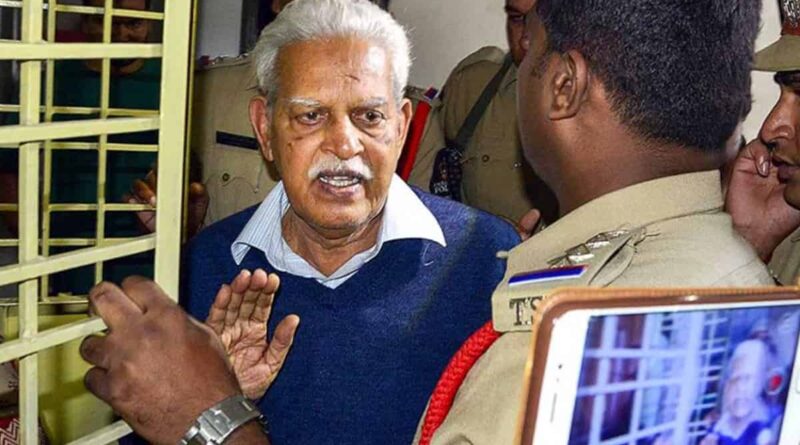 The court said, “Certain facts were brought before us during the course of hearing. When we verified, we found some substance in the contention.”

The court passed directions to appoint medical officers in Maharashtra prison hospitals, and the compliance report should be submitted by the Inspector-General of Maharashtra state by April 30.

Mr. Rao is currently out on medical bail and residing in Mumbai with his wife. He was granted interim medical bail for six months on February 22, 2021, which has been extended by three months so he can undergo a cataract operation.

Additional Solicitor-General (ASG) Anil Singh, representing the National Investigation Agency, had earlier opposed the plea and pointed out Mr. Rao was granted interim bail in February 2021 for six months, and the period had been extended from time to time. He mentioned that after being medically examined by the state-run J.J. Hospital, Mr. Rao was taken to a private hospital and as per its report, “He is cognitively normal.”

Mr. Singh added, “He is over 80 years old, obviously there will be medical problems. But that does not mean he keeps taking extensions forever. He has to surrender some time. I don’t see why this plea should survive.”

He went on to say that Mr. Rao had not been granted regular bail so there was no question of extension, the offenses were very serious and concerned national security and, if found guilty, attracted death penalty.

The ASG also added that allowing Mr. Rao to go back to Telangana would set a wrong precedent and that he was granted interim bail in February last year also because of the COVID-19 pandemic.

Senior advocate Anand Grover, appearing for the Telugu poet and activist, had argued that Mr. Rao had shown early signs of Parkinson’s and the road was downhill; he may collapse someday because of the tremors. “If he gets a brain clot in Taloja Central Jail, what will he do? How will they manage the risk at Taloja when there is no monitoring facility? …. Can he die because of that? I am not saying this loosely. There are no facilities there in Taloja. They are not putting money in it,” Mr. Grover said.

Mr. Grover also said if arrests could be made from across the country, why could not Mr. Rao report to the NIA court in Hyderabad. Mr. Rao, an accused in the Bhima Koregaon case, was arrested on August 28, 2018, from Telangana state.