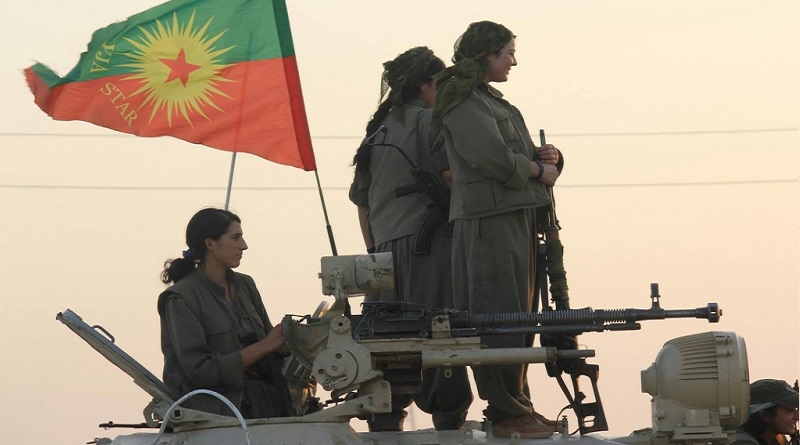 On the afternoon of March 4th, Kurdistan National Council (KNC, also known by its Kurdish acronym, ENKS or simply as Rojava Peshmerga) forces, commanded by the Kurdistan Region of Iraq’s dominant political party, the Kurdistan Democratic Party (KDP) encountered Shingal Resistance Units (YBŞ) forces in the town of Khanasur near Shingal. The Ministry of Peshmerga Affairs in the KRI claims that their forces were stopped by YBŞ volunteers and fired upon, while the PKK and YBŞ claim that they received tank fire prior to engaging ENKS forces. Fighting ensued and there were killed and wounded on both sides. While the fighting only lasted several hours, the event is the culmination of years of intra-Kurdish disputes over regional influence and may have reverberations far beyond Shingal.

The PKK and power politics in South Kurdistan

The KDP and PKK have a long history of mutual enmity and the two groups have intermittently fought each other since the 1990s. The KDP claims legitimacy in the KRI and in the Kurdish inhabited territories outside of the KRI proper (including Shingal) that are currently the subject of a jurisdictional dispute between the KRI and Baghdad. Additionally, while the KDP’s territorial and economic disputes with Bagdad grow more complicated and intractable, it has come to depend more on its economic and security partnership with Ankara, which has also meant the increasing salience of its opposition to the PKK and the rising YPG in Rojava

Meanwhile, the PKK has responded to opportunities occasioned by popular opposition among ethno-religious minorities to the KDP’s expansion of its military control into the disputed territories to expand its own activities into Iraqi territory. The KDP claims the northern parts of Nineveh and Salah ad-Din governorates as part of the KRI, but other groups including the Yazidis that populated the Shingal district, like the Kurds, also claimed the right to self-determination. The establishment of the YBŞ was the result of the withdrawal of KDP Peshmerga and Zerivani forces from the city in August of 2014 and the subsequent genocide of its Yazidi inhabitants by ISIS. PKK and YPG forces filled the security vacuum, established the YBŞ and declared Shingal to be an independent canton. Wary of the KDP’s claims to Shingal, the Iraqi government not so secretly provided YBŞ forces with military support. Not surprisingly, the establishment of the Shingal canton and Baghdad’s tolerance of its existence provoked the ire of the KDP and its Turkish allies. In December of 2015, Turkey reinforced Bashiqa, near Mosul, with armor and personnel and the KDP and Turkish government have had frequent meetings to, among other things, discuss security in Nineveh, the most recent being last week in Ankara between de facto President of the KRI, Masoud Barzani, Turkish President Recep Tayyip Erdogan and PM Binali Yildirim.

The KDP does not exercise political or military control over the entire KRI and its influence is largely confined to the governorates of Erbil and Duhok and the disputed territories in Nineveh and Salah ad-Din governorates. The Patriotic Union of Kurdistan exercises de facto military and political jurisdiction over the governorates of Sulaymaniyah and Halabja, as well as the disputed areas of Kirkuk and Diyala governorates. Although the two parties have participated in a joint governing coalition since 2005, they continue to engage in a build-up of military forces and alliances to deter aggression on either side of Erbil- Sulaymaniyah line, particularly in Kirkuk governorate, which is jurisdictionally divided between KDP and PUK forces. This has meant that the PUK has sought to offset the KDP-Ankara alliance with support from Tehran, Baghdad and the PKK. The PUK has permitted the PKK to operate in its zone of influence and provide auxiliary support to its Peshmerga forces along the front line against ISIS.

First, the Shingal operation escalates tensions between Baghdad and the KDP. The KDP, United States and Iraqi government signed an agreement prior to the commencement of the Mosul operation that Peshmerga would participate in the operation to retake the towns and villages around Mosul in Nineveh province, but that those forces would withdraw after the completion of the operation. However, Masoud Barzani, president of the KDP and de facto president of the KRI has since asserted that his forces would not abandon their gains in Nineveh and the operation in Shingal is undeniable proof of the seriousness of this assertion and it brings the KDP into direct conflict with Baghdad. Furthermore, the apparent backing of Ankara may lead to escalating allegations by Baghdad that Turkey is violating of Iraqi sovereignty by intervening in the KRI and Nineveh.

Secondly, while the position of the PUK on the operation is unclear at this time, its tacit support for the PKK and the YBŞ puts it in an awkward position, especially as the KDP and PUK are negotiate to reassemble the Region’s dissolved democratic institutions and prepare for Parliamentary and Presidential elections in September. The PUK politburo most likely prefers to avoid involvement in KDP affairs, but if Turkey or the Iraqi government intervene directly in the dispute, or if the KDP demands the PUK’s compliance in cutting off support for the PKK as a condition for political or economic compromise, the PUK may be forced to choose sides. The PUK has not forgotten how the KDP used Sulaimaniyah’s cordiality with the PKK as a pretext for summoning Turkish air support against PUK Peshmerga during their bloody civil war in the 1990s. Therefore, while the Shingal operation may not immediately lead to hostilities between the KDP and PUK, the KDP’s campaign against the YBŞ sends a clear signal to the PUK that it is willing to take up arms against other Kurdish parties to attain its political goals; a position that will undoubtedly exacerbate the KRI’s security dilemma, particularly due to the sensitive balance of power between the parties in Kirkuk. In fact, we may have already seen such an escalation with the deployment of PUK Force 70 peshmerga units to Kirkuk on Tuesday, a move perhaps as much intended to force Baghdad’s compliance on prior agreements with the PUK and Kirkuk governorate as to deter KDP aggression.

Third, the PKK/YPG/YBŞ forces have declared that they are ready to fight until the “last drop of [their] blood” for Shingal, but they are vulnerable to attack on multiple fronts: from the KDP from the north and west, Turkey from the north and ISIS, as well as the Syrian regime, from the south in Rojava. Furthermore, its forces are currently moving on the ISIS stronghold of Raqqa and fending off frequent attacks by Turkish forces and their affiliated militias. Therefore, any reinforcement of Shingal would increase Rojava’s vulnerability to attack from any one of its enemies. The YPG can expect US air support for now, but there is uncertainty regarding the position of the new administration on supporting the YPG vis a vis the Turkey’s increasingly bold incursions into Manbij.

Fourth, the United States now must reevaluate its strategy against ISIS in Iraq and Syria as it has now become clear that Turkey and the KDP are jointly mobilizing against the PKK and its affiliated units. The US has supported both Peshmerga and YPG. Furthermore, the U.S., like Iran, supports a one Iraq policy and Turkey is a NATO ally. Therefore, the US is bound up in an almost impossibly complicated and contradictory regional policy. The overflow of tensions between the Turkish-backed KDP and PKK/YPG/YBŞ forces, which are tolerated by Tehran, Baghdad and the PUK, will either force the US-led coalition to choose sides or broker an agreement between the KDP and YPG/PKK/YBŞ. The consequence of choosing the former may be the United States’ involvement, however reluctant, in an intra-Kurdish, and possibly, international war and losing sight of the mission to defeat ISIS in Iraq and Syria.