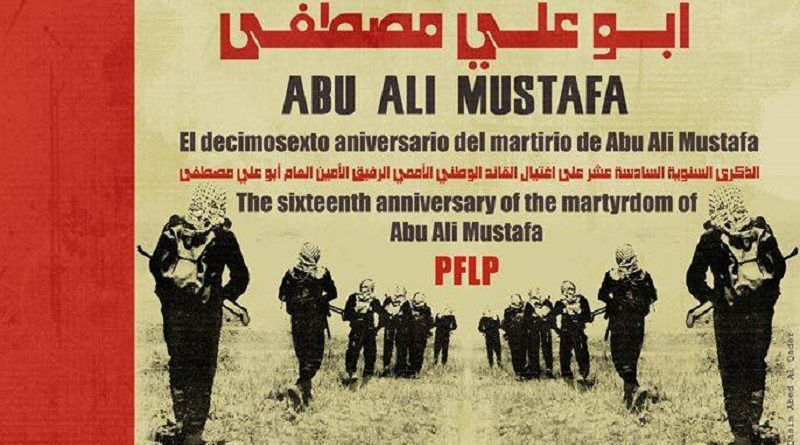 On the 16th anniversary of the martyrdom of the Palestinian, Arab and international leader, Comrade Abu Ali Mustafa, the General Secretary of the Popular Front for the Liberation of Palestine, we reaffirm our commitment to fulfill his vision of the liberation of Palestine, embodied by the martyr since he first joined the ranks of the national liberation movement. He marched on the road of the martyr without hesitation or reluctance. His burning spirit, conscious will, and firm conviction in his people, the justice of their cause and great hope for victory were a catalyst and guide throughout his years of struggle.

He recognized that the nature of the struggle against the Zionist invasion of our Arab homeland and Palestine in particular requires the concerted efforts of all national, organized, collective and conscious forces on the field of struggle. This realization led him to first join the ranks of the Arab Nationalist Movement and then to become a leader in the Popular Front for the Liberation of Palestine after contributing to its founding.

Throughout his life of struggle, the great martyr Abu Ali Mustafa represented values, lessons and principles that deserve to be highlighted, especially amid the current Palestinian reality with all of its problems, crises and complexities:

First, the awareness and culture on which Abu Ali Mustafa relied to formulate his own understanding. He never stepped back from his will to read, learn and develop his knowledge and education, building up his ever-evolving consciousness and developing politics and culture in the service of national liberation. Valuing the issue of culture and knowledge amid our reality comes to confront all attempts to falsify history, obscure reality and develop an atmosphere of despair, frustration, destructiveness and defeatism.

Second, for him, the struggle was an approach to life. This was reflected in his behavior, his words and his actions. The struggle was not linked to him by a title, location, rank, position, decree or ritual. He was connected with his people in all their various locations, inside and outside Palestine, and their forms of struggle – military, political, organizational and popular. He was among his people through all stations of his life, as he was at the moment of his martyrdom.

These forms of struggle and their exercise must be on the agenda of all political forces, so we can employ the best of all forms of struggle – political, cultural, military, popular, media and others – without pitting them against the other, in order to serve our vision and goals of national liberation.

Third, holding fast to the strategic goal of the Palestinian national struggle, the liberation of all of the land of Palestine, and not to allow it to be truncated in the name of “tactics,” but to serve this goal and walk on this path.

Today, after a quarter of a century of negotiations and the Oslo Accords with the Zionist enemy, the futility and catastrophic damage to our rights, our cause, and theunity of our people, of the road of conciliation is clear. It is necessary to cast away all illusions that there is any way forward in this “process” for a real Palestinian state, self-determination and return. Instead, we must break firmly with this path and all of the political and economic consequences and reject any pressure to return to negotiations, and confront any attempt to spread illusions about the possibility of achieving the goals of the Palestinian people through the trading of these schemes and projects. This includes the so-called “deal of the century” or “regional solution.” The alternative is to work seriously to restore the Palestinian national liberation movement, end division and build Palestinian national unity.

Fourth, the unity of the Palestinian national struggle means upgrading the role and function of the tool of that struggle through the rehabilitation and rebuilding of the Palestine Liberation Organization with a program, charter, moral and material base to bring together the energies and abilities of the Palestinian people.

Loyalty to the martyr Abu Ali and all of the martyr who struggled for the PLO, its program and national role, defending the unity of its representation, means the necessity of upholding the national agreements made in Beirut and completing the work of the preparatory committee to ensure the organizing of a true national unity council outside Palestine. This also means rebuilding the institutions of the PLO on a natioal, democratic, united and correct basis with pluralism and democracy in its institutions and in all matters of national affairs.

Glory to the martyr and the leader, Comrade Abu Ali Mustafa!

We pledge to continue on the path of struggle to achieve the goals of our people to liberation and return.