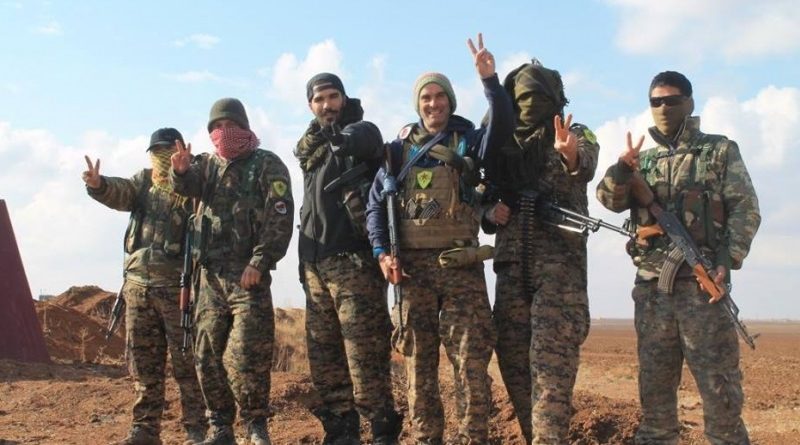 A new internationalist Antifascist battalion (AIT) has been formed in Rojava-Northern Syria Federation to fight the Islamic State group.

The battalion, formed by foreign volunteers from around the globe was declared on 19 December 2016 with a press statement.

The statement by the group, which was released online read:

“Today a group of fellow anti-fascists, internationalists, anarchists, communists, socialists and libertarians are appealing for support to the revolution of Rojava and so joining struggle of the oppressed. We come from the shadow of the western capitalist world, to fight and to learn from our fellow comrades in Rojava how to claim freedom and the right to exist. With their courage we hope to create a life without oppression and persecution, a world without fascism and obscurantism. We set sail towards this goal pushed by the winds of liberty, equality, and respect for the Earth. This is the way of those exceptional people who have sailed towards oblivion leaving an unquenchable heat inside our hearts. It is the same warmth that we feel now, that animates us, that drove us across the threshold of the flames of the struggle of the Democratic Federation of Northern Syria.”

The group’s symbol, a phoenix is taken from the revolutionaries who fought Franco’s fascism in 1935 the statement said.

“Every comrade, here, now, fights for the light, with the living memory of previous partisan struggles, for a better world, that have led up to these fiery lands. So, with the name of our unit, we want to remember the comrade Martyr lvana Hoffman, who fell valiantly fighting ISIS on the Tell Tamir front, in March 2015. Together we fight to defend those values, which we retain in our hearts. We take our symbol from the revolutionaries who fought in Spain, in 1935, for a world without borders, without shadows and without fear— History did not defeat them. Their dreams did not die, but are now reborn with us, with each comrade, who now fights in Rojava. As a phoenix always rises from the ashes, so the fire of the Revolution, will continue to burn forever.”

Hundreds of foreign volunteers have travelled to Rojava since the social revolution there gained international recognition with the fight against the Islamic State (ISIS) group in Kobane in 2014. More than a dozen volunteers have died in the ranks of the People’s Protection Units (YPG) and Syrian Democratic Forces (SDF).