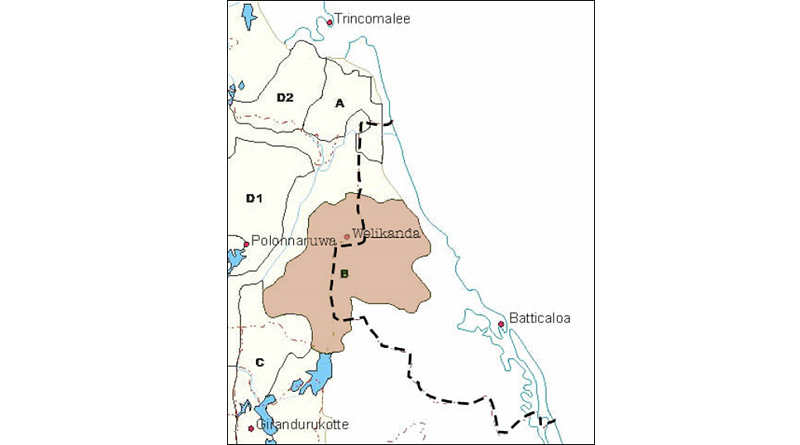 Colombo-base Sinhala politicians are bringing in colonisers from South into strategic Vaakarai region, which is located north of Batticaloa district in the Eastern Province. Sinhala traders are being encouraged to lease private lands from genocide-affected and poverty-stricken Eezham Tamils, civil sources in Koa’ra’laip-pattu North said. Sidestepping provincial and local mechanisms, the politicians in South facilitate the dealings through local benamis. Military occupation and Colombo’s business elite operate along the same agenda of land grab, the officials further said.

Tsunami- and war-ravaged Vaakarai has been severely affected by decades of structural genocide and poverty.

Tamil people having no original documents to their private lands are being selectively exploited by the local benamis to lease out their lands to traders from Colombo.

Some of the lands have been already seized by Sinhala traders in Paal-cheanai, Puchchaang-kea’ni and Panichchang-kea’ni. Paal-cheani is located 66 km north of Batticaloa city.

Divisional Secretaries and Village officers (GS) have not been consulted by the landowners or the benamis involved in the deceptive land grab.

The occupation coming through Sinhala traders should be seen together with the move of demographic changes taking place through militarisation with the motive of annexing the coastal belt of Vaakarai in the Eastern province with Welikanda division in the Polonnarwa district of North Central Province.

Mahaweli system B, running across Polonnaruwa and Batticaloa districts, will be interlinking the reservoirs in the districts while SL Archaeology Department, Buddhist monks and SL military are erecting Buddhist viharas.

Under the UNP and SLFP regimes, foreign governments have been funding the Mahaweli ‘development’ programme, while Colombo government was wedging the territorial integrity of Tamil homeland at several key locations as at Ma’nal-Aa’ru (Sinhalicised into Weli Oya) and Kokku’laay in Mullaiththeevu district, Pulmoaddai, Moothoor and Kantha’laay in Trincomalee district.