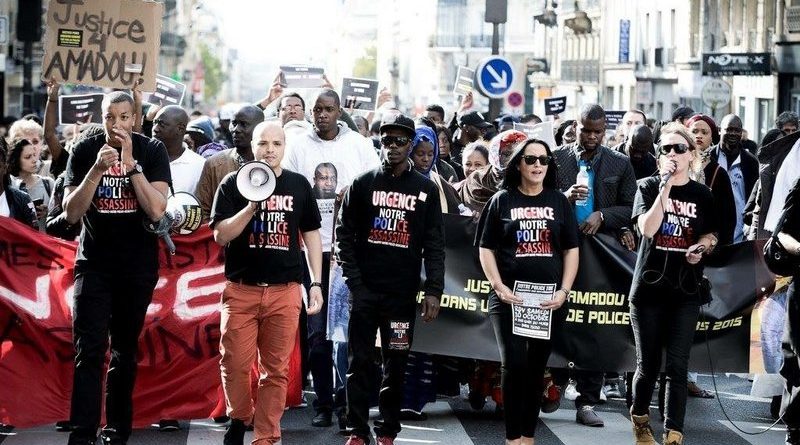 The assassination of Adama Traoré in Beaumont-sur-Oise and Shaoyo Liu in the 19th arrondissement of Paris, and the rape of Théo Luhaka in Aulnay-sous-Bois once again reveals the brutality of police violence in working class neighborhoods. Despite the strong mobilization for Adama, Théo and Shaoyo, police impunity continues and is perfectly maintained by the ruling class which grants more and more power to the armed forces of the State.

Recently it was young Curtis who was killed by the police on Friday, May 5, certainly by some BAC cops, a murder which was quickly made into an accident. And those who dare to raise their voices a little too strongly against this system have only one response: repression and confinement. We saw it with the heavy and unjust conviction on appeal of Bagui Traoré for six months in jail on June 6.

Today it is Amal Bentounsi who (again) faced the repression of the bourgeois state. She was arrested as she courageously filmed a police intervention in Meaux. During the live video she was filiming, one of the cops was wearing a Nazi symbol, an iron cross on his ring, the police officers of Meaux obviously have something to hide in fearing Amal’s phone.

Amal Bentounsi is the founder of the Urgence notre Police Assassine (Emergency, our Police Kills) collective. She founded this collective following the assassination of her brother Amine Bentounsi, killed by a bullet in his back in 2012. Since then, she has never stopped denouncing all police brutality and supporting the families of the victims. Her struggle quickly led her to be targeted and repressed by the bourgeois state. Thus, Manuel Valls, then Minister of the Interior, shamefully filed a complaint against her for “contempt”, a complaint that resulted in a dismissal. Thanks to a strong mobilization and a fierce fight against police lies, Damien Saboundjian, the policeman who murdered Amine Bentounsi, was convicted in March.

Under capitalism, police violence can only increase. The bourgeois state needs to maintain itself through violence in places where social order is most easily challenged. Working class neighborhoods are the proletariat strongholds in France, and for this reason the bourgeois repressive forces (such as the BAC, the BST, etc.) are the most present and the most brutal there. The arming of these forces is becoming heavier and heavier, the municipal police is always more equipped including with firearms, the BAC now has G36C assault rifles. And the laws of the bourgeois state always facilitate class injustice and police murder: the state of emergency and its constitutionalization, the self-defense law and so on.

The new government will not make any changes, it will only intensify the security policy already in place.

Faced with police violence we must organize and mobilize ourselves. We must develop a genuine people’s self-defense in our neighborhoods. We need to be responsive and monitor the police for each of it interventions. We must strengthen our solidarity with all police repression victims. We must demand the release of Bagui and all those locked up for daring to defy the police lies. We must also develop the consciousness that will put an end to class injustice and police brutality with a revolution, because it’s only by overthrowing the capitalist system that the power of our class will be established.

Justice and Truth for Curtis, for Angelo Garand, for Shaoyo, for Theo, for Jean-Pierre Ferrara, for Adama and for all the victims of police violence!

Let us prepare for popular self-defense!