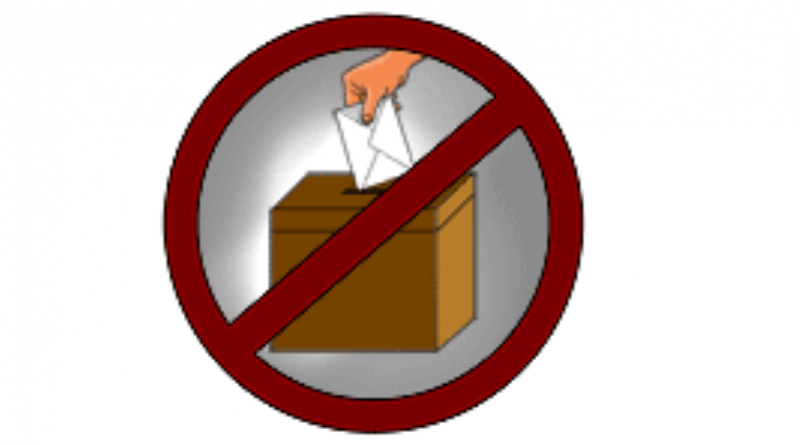 Although most people are now pretty disillusioned with governments and political parties, they still feel that they ought to vote. The suggestion that people positively reject the existing political system by refusing to vote often provokes confusion and anxiety. Here are the reasons typically given for voting and the reasons why they do not make sense.

“Like most people, I have always voted and will so again.”

Doing anything simply out of habit is not a rational justification for it. Voting, like biting your finger nails, is a bad habit and you should think about whether there are any sensible reasons for carrying on with it.

“People were imprisoned and killed so you could have the vote. It’s disrespectful to them not to vote.”

It is true that in the past people such as the suffragettes did fight hard to obtain the vote in parliamentary elections and they are worthy of our respect. Unfortunately all adults having the vote has not brought about the outcome that was desired: that it would give us control over our lives. One might as well say that because followers of religions such as Christianity and Islam accepted martyrdom rather than renounce their religion we should all take up their religious practices. This type of argument is illogical: its conclusion dies not follow from its premise.

“You’re privileged to have the vote and it’s your public duty to vote because in some countries people don’t have this right.”

Although every few years members are elected to Parliament it does not give us power over the decisions and policies of governments. They are notorious for not doing things they were committed to in their election manifestos, e.g. ending selective secondary education, and doing things that they never mentioned during election campaigns, e.g abolishing student grants and introducing tuition fees. The truth is that British governments of any party do what is in the interests of the minority capitalist ruling class, e.g. cutting taxation on higher incomes. Most of our civil liberties have come about and are maintained as a result of campaigns mounted from outside of Parliament, e.g. women’s rights, gay rights, and not as a result of initiatives from politicians who are more likely to try to take these rights away, e.g. the anti-trade union laws. In Britain we do have some hard-won civil liberties that we should fight to defend but that will not be done by voting for those who wish to restrict and deprive us of any civil rights that are a nuisance for our rulers.

“If you don’t vote you won’t have any influence on government policies.”

It is not the people at large who decide the policies of the main political parties but the leaders of those parties. The Labour and Conservative parties do not even pretend that their own members determine the policies of their parties. The policies put forward during elections are ones designed to manipulate the electorate by playing on our hopes and fears. The Tories and Labourites trade on underlying racist sentiments by vying with each other on who can be tougher on keeping out asylum seekers. Both parties falsely claim that they can improve public services while reducing taxes. The main parties treat us as dopes who can be manipulated as they wish. As for other parties, the Liberal Democrats found that when they entered the Coalition Government with the Tories that powerful interests in the big corporations, the media, armed forces commanders, senior civil servants, etc. put solid obstacles in the way of more progressive policies being enacted. The experience of the German Green Party’s participation in government shows this process very clearly. Voting does not give people influence on the policies of governments but serves to create the illusion that we do have some influence.

“If you don’t bother to vote then you can’t complain if you don’t like the government’s policies.”

It would be rather illogical to vote for policies with which one disagrees. Furthermore this argument seems to assume that we only have the right to any civil liberties on condition that we go through the motion of playing the electoral game, of helping to sustain the illusion that the regime is legitimate. In so far as we do have any civil liberties, these have been won through extra-parliamentary action, e.g. the right to publish printed matter without a government licence, and usually in the face of opposition from Parliament. The State usually tries to restrict our freedom, e.g. the anti-trade union laws, and it is only through our direct actions that that they can be defended and maintained.

“Not all the parties are as bad as each other so you should vote for the lesser evil.”

There are some small differences between the various parties standing in the General Election but what they all have in common is support for the present political system that is fundamentally undemocratic, that does not bring about rule by the people but rule by the minority capitalist class. What we really need is a new type of social order where all of us really do have control over our lives. This will never come about if all we do is chose the lesser evil. We need to emphatically reject a fundamentally evil system and part of doing this is breaking from the bad habit of voting.

“If you don’t like any of the parties participating in the election then stand and vote for yourself.”

Again, this would be simply playing our masters’ game. Even if a government genuinely committed to fundamental change were elected its attempts to put its policies into practice would be blocked by the ruling class and their functionaries. If necessary, our rulers would use the police and armed forces to overthrow any government they felt posed a real threat to their interests as happened in Spain in 1936 and Chile in 1973.

“Not voting is just being apathetic.”

This is the sort of image of non-voters that politicians and the media want to project. In fact many non-voters are consciously rejecting what they have come through experience to know is a rotten, undemocratic system. The people who are really apathetic are those who mindlessly allow themselves to be herded into the polling booths even though they have no real confidence in the present political system.

“If you don’t vote you’re against democracy.”

As already stated, the present political system is a sham democracy that does not give the great majority of the people any real power. Many of us who refuse to demean ourselves by voting want real democracy – rule by the people – instead of the present system of rule by a rich few.

“Voting is better than doing nothing.”

In fact voting is worse than doing nothing because it helps make the existing undemocratic system appear legitimate.

“What would happen if nobody voted?”

A revolution! Clearly if the great majority of people refused to go through the voting farce then it would show that they had seen through the system. The conditions would be right to overthrow rotten capitalism and replace with a new, truly democratic socialist society.

REMEMBER: IF VOTING CHANGED ANYTHING, THEY’D MAKE IT ILLEGAL.