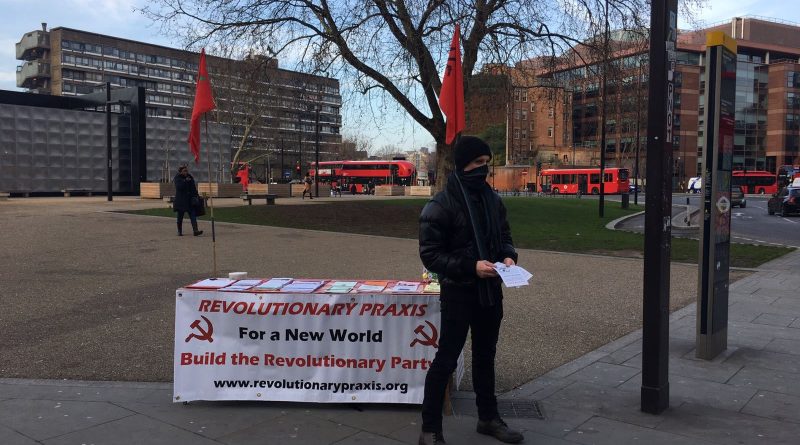 Revolutionary Praxis is now holding regular stalls in South London at Elephant and Castle. Over the past two years we have held stalls in a variety of locations in South London with Marxist educational literature and handed out leaflets in which we have popularised the burning issues affecting the working class in Britain.

We will now be holding a stall in Elephant and Castle, Southwark on the first Saturday of every month. This area of London has some of the poorest residents, and yet property developers Lend Lease in league and encouraged by the Labour Council have demolished council estates and plan to demolish the Elephant and Castle shopping centre and replace it with ‘luxury’ flats and a commercialised shopping area. Rents in this neighbourhood are already ridiculously high and ‘regeneration’ schemes by the Labour Council and property developers will only increase property prices and rents making workers poorer, landlords richer and council tenants moved out.

The area of the former Heygate council estate in Elephant and Castle saw residents removed and ‘decanted’ across London and Britain to make way for ‘mixed’ housing. Yet all the new stock of housing is so expensive a Malaysian Property Development firm bought the whole lot! This no doubt to charge exorbitant rents to any tenants or to leave much of it empty to increase land value. Over 7000 units were built and only 79 will be ‘social housing’ yet the Heygate estate which was tragically destroyed had consisted of 1214 units and been home to 3000 people. The Labour Party may talk as though they are now on the side of working class people but as the situation in Southwark demonstrates they are in fact the enemies of the people!

Revolutionary Praxis will hold a stall here on the first Saturday of every month to listen to the concerns of the masses and encourage political education among working class people. When they grasp revolutionary politics the boss class will no longer be able to oppress and exploit us!