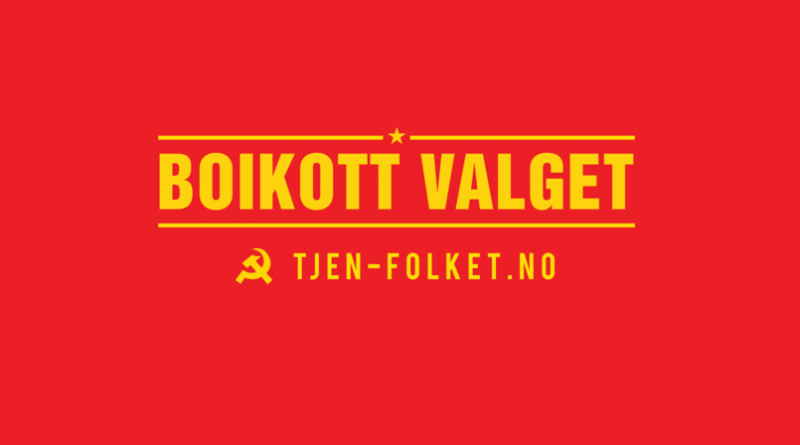 When we put forward our slogan we receive many questions. For this we are happy, we are fond of discussion. Here are fourteen common questions and critiques we meet, and some of our attempts to give brief answers.

1. Why boycott the election?

We say that the three main reasons are:

2.Why isn’t Tjen Folket running in the election?

Communists may run in elections, but only if doing so is serving our struggle. We work to build a real communist party for battle, not an ordinary bourgeois electorial party. This is our most important task. To become a part of the electorial circus vil be to jump of track from this work.

This is the road which Arbeiderpartiet (The Labour Party), NKP (Communist Party of Norway), SV (Socialist Left Party), AKP (Rødt) (The Workers Communist Party – Red Party) took in this country. We will not walk the same old road down in the mire of bourgeois parliamentarism.

3. What happens if everyone boycott the election?

In it self, this will not change anything. And neither will it happen. But IF it hypothetically happened the state could still continue as before without a single politician. It is not the politicians who decide, it is the capitalist class who does. And it is not the politicians that administrates, it is the bureaucrats who does. Many European countries have continued as before for months and years without a government – for instance Spain, Netherlands and Belgium.

But when people boycott they make a choice which might change their mentality, which in turn might change the mentality of other people. It undermines the trust in the system. It shows that politicians do not have any trust. It enables more people to dare to question the whole rotten system. Therefore it points, in itself, forward to another system.

To create communism is not just to organize an alternative. It also requires destruction of the system which exists. To undermine the legitimacy of the enemy’s choice, is a link in the strategy of removing this entire system.

4. If all of the left wing boycotts – the political right surely will win?

We are not a part of the «left side». The left side holds chairs in the parliament and in city-council leaderships of municipalities. They want a little more taxation and a little more welfare, but other than that they are the same as the right side. Regardless of colour the parties are very similar. We are going to have a government which is upon either Høyre (Right Party) or of AP (Labour Party). And the two are so similar that it is difficult to see the difference – even in theory.

Regardless of who wins the working class will lose. The world’s poor will lose, peace will lose, the environment will lose. And the longer people believe they have to choose between right or left, the longer capitalism will make all the important decisions for us.

5. If you boycott, you are useful idiots for the political right!

This is not logical in our opinion. We do not owe anyone to give them our support. The Labour Party have sent bomber planes against the world’s most empoverished people. We refuse to be a useful idiot for wars against the world’s most empoverished. And we refuse to support small partners of the Labour Party, as the Socialist Left Party and Red Party.

The useful idiots are the leftist believers of the system, which criticize racism and war, but ends up supporting governments which are just as racist and warmongering as any government with Right Party or FRP (the Progress Party).

Those who rationalize this, are rationalizing brutal abuse against the survival of the earth. They are making sure that the system continues with the massive destruction we are seeing ahead of us.

6.Why can’t you just vote for the Red Party?

The leadership of the Red Party works towards removing everything which remind of communism from their party agenda, and from the way the Red Party organizes itself. They have expelled a number of communists from the party, and are slandering the history of socialism. No communist can contribute to something like that.

The Red Party have also chosen to become a new SV. Instead of fighting against the war-party AP, they promise support to an AP-government. They have chosen a strategy which enables the Red Party to become a parliamentary party, which can never lead anyone out of capitalism.

They are a part of the «red-green» majority in the city council of Oslo (capitol) and this is their wish and strategy for the future as well. This does not lead to revolutionary struggle, but is rather choking rebellion and making the Red Party an integrated part of the system which we want to crush.

7. Why are you throwing away your votes?

All votes in this election are a waste. The real power lies with the ruling class. The real power of the people are in the streets and in popular organizing. To exercize your vote is a waste of time. One should rather use it in political activism.

8. Why do you want people to be passive?

We do not at all want people to be passive. We ourselves are very active and wish many more people to join us. And we are also happy when people are active in good causes outside of our organization as well. However our opinion is also that it is better that people do not care, than building up under the confidence of the parties and the belief in the system by participating in the election circus.

9. Why not cast a blank vote instead?

We are not saying that people should absolutely not vote blank. People may do that if they like. This is not an important question for us – there is no difference in reality.

10. If you do not vote, you have no right to complain!

Our opinion is, on the contrary, that those who do not vote have the biggest reason to complain. The act of not voting is actually a complaint in itself. It is a complaint against the parties and their choices, it is a complaint against their state. This is not our state, this is not our election and we have all reasons to complain on capitalism and the horrible consequences this system has for the people in the world and the consequences it has on the environment.

11. If there is not any point, you might as well vote on some of the alternatives which are less bad?

We make a clear stand by not voting. We do not want to be associated with any of the parties. These are bad parties which wants to administer capitalism on behalf of the capitalist class. We say no to all of them, to make a clear stand against the entire system.

12. In choosing between plague and collera, collera is still better than plague?

To choose between the least serious illness may seem logical – in the short term. But in the long run, it weakens the immune system and makes people more susceptible to more serious illnesses. To reject the lesser of evils, forces us to work on the antidote which might cure the globe of the real sinner; capitalism.

13. What is the alternative?

Some communists use Lenin’s book «radicalism» against our boycott campaign. The say that it is wrong to boycott at this time, because Lenin writes against the radicalists (the «left» communists) and their principles against participating in bourgeois elections, in this book.

We can answer in some points regarding this:

Do you have further questions or objections ? Send it to us and we will reply!