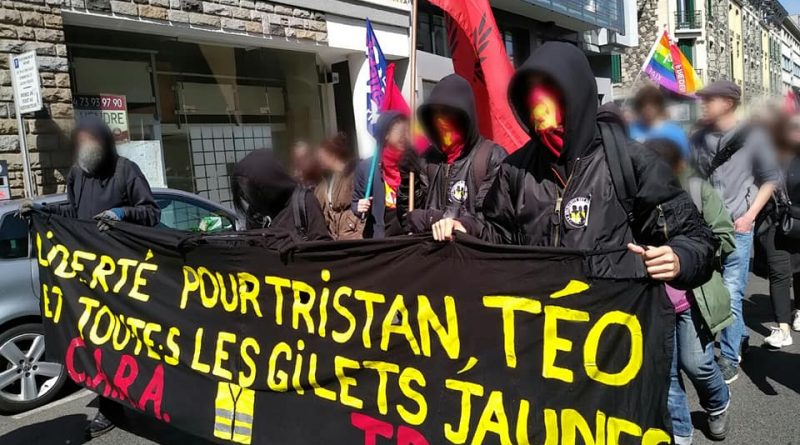 Repression in the French state today

After six months of movement of the Yellow Vests, the repressive apparatus of the bourgeois state has expanded considerably. Through decrees and laws, such as the “anti-rioter” law, the state has strengthened its capacity to attack and imprison the masses to a new level. All these measures are done in parallel to the so-called “Republican reconquest” of the suburbs, a formula that hides a strengthening of teams of the police brigades in general in neighborhoods. And while the security forces are victimizing themselves, complaining about the hot climate in the neighborhoods or work stoppages during the Yellow Vests events, it is the masses, the working class, the proletarians, who are taking the full weight of the bourgeois State on their backs.

Like Zineb Redouane, killed during the first weekend of December after tear gas was shot at her window. Like the young Adam and Fatih in Grenoble. Like this man from Drancy, killed by the police choking him while his wife had called them to stop him from taking the road while drunk. Like Adama Traoré, whose family has been fighting for years for the truth. Like the more than 2000 wounded in Yellow Vests demonstrations, and almost 100 seriously wounded, mutilated by the police for having rebelled.

And of course, like all those who undergo checks, arrests without reason, judicial pressures and reactionary judgments. As for example that Yellow Vest who had filed charges against the cops in Le Mans, and who was found May 28 in custody for maintaining his charges. As the high school students of Mantes-la-Jolie, forced to put their hands on their heads and threatened by police officers in arms, cops who were relieved of any bad behavior by the IGPN (National Police Inspection in France). The same IGPN that is closing all the cases opened against the police since the beginning of the mass movement, classifying them.

The masses respond to repression: class solidarity and popular self-defense against the rise of fascism

The repression is not ignored by the masses: for example in Clermont-Ferrand, two young Yellow Vests, Téo and Tristan, were sentenced to 1 year and 8 months in prison, including 10 with suspended sentence, and 18 months of prison of which 10 with suspended sentence. Since their arrest and after this condemnation, solidarity has been expressed with a movement demanding their release, acclaimed at the May Day demonstronstration in Clermont-Ferrand. For Teo and Tristan, as for hundreds of others, class solidarity against the repression of the bourgeois state is an absolute necessity that we must carry! Events are organized throughout the French state against repression, such as the support concert that will take place in Clermont-Ferrand on June 29 for the Yellow Vests.

This quantitative increase in the violence of the bourgeois state and its police shows the contemporary dynamics of fascism: the restructuring of the bourgeois state in the face of the crisis to prepare an openly dictatorial mode of government. All of this does not need to be set up by fascists, because the liberals themselves, as representatives of their imperialist bourgeois class, have to tighten the screws and put the masses of the people in check to avoid a collapse their power. In this context, the crisis in the French state is accompanied by a general crisis of imperialism, and the French bourgeoisie tries to stay afloat by repressing on the inside, and by fiercely defending its markets on the outside, particularly in Africa and its colonies.

For the masses, police repression prepares revolutionary violence. Because what these six months of struggle have shown, what these years of battle against the increase in police devices and for self-defense against their aggressions have shown, is that there is no justice under bourgeois rule. Today, the bourgeois state thinks it can stop the cries of revolution and revolt by stifling them in the bud, arresting preventively, marking, fiddling, questioning and monitoring.

But by doing all that, it is only creating the conditions where the necessary revolutionary violence is clearly the only viable way to win against it. It accentuates the situation of millions of proletarians today in which, rather than being arrested and condemned without having done anything, we really revolt because we have nothing to lose but a life of misery. It paves the way for the People’s War in the French state.