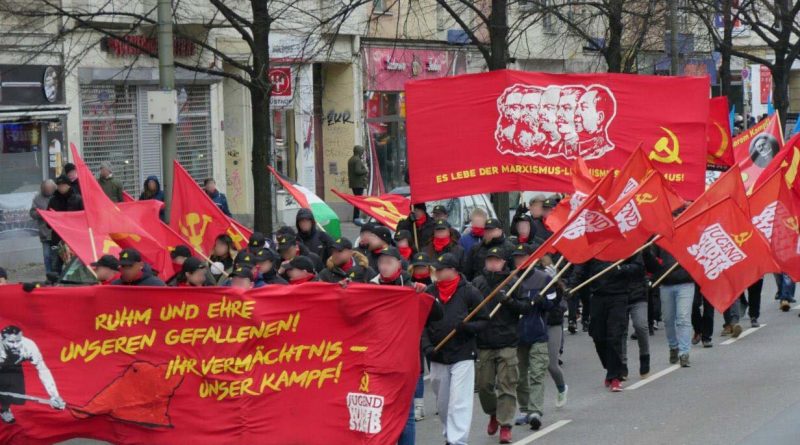 The annual Lenin-Liebknecht-Luxemburg demonstration in Berlin had among its participants the militant youth organisation Jugendwiderstand, a Marxist-Leninist-Maoist organisation. Members of Revolutionary Praxis were honoured to be invited to attend this great event in memory of the two German revolutionary Communist leaders Rosa Luxemburg and Karl Liebknecht, who were murdered by the fascist Freikorps in 1919 at the orders of the Social Democrat government.

Jugendwiderstand organised a bloc consisting of revolutionary Communists from across Europe, from France, Norway, Ireland and Britain. Carrying Communist banners and flags this was a great show of international solidarity. The bloc was well organised and disciplined in comparison to many of the other attendants. The German police were out in force and attempted to intimidate the march, attacking it on several occasions when they targeted Kurdish workers who held pictures of Ocalan, arresting several.

When the bloc reached the cemetery where the revolutionaries are buried, members of Jugendwiderstand delivered militant speeches to the crowd, demonstrating that practical struggle is the true sign of respect for the fallen leaders of the past. This was in stark comparison to the Revisionist and Trotskyite elements that stood around the graves in silence crying and holding flowers in a gross display of religiosity.

Jugendwiderstand then organised a separate march through a poor area of East Berlin where they have a base area. Shouting militant anti imperialist slogans and carrying red flags, Palestinian flags and revolutionary banners the internationalist bloc marched through the neighbourhood. Residents came out to watch and some showed the clenched fist in support. The demonstration was a success in carrying the revolutionary message to the masses and not simply following the official events of the day.

Jugendwiderstand are an inspiration to the oppressed and working class youth of Germany.