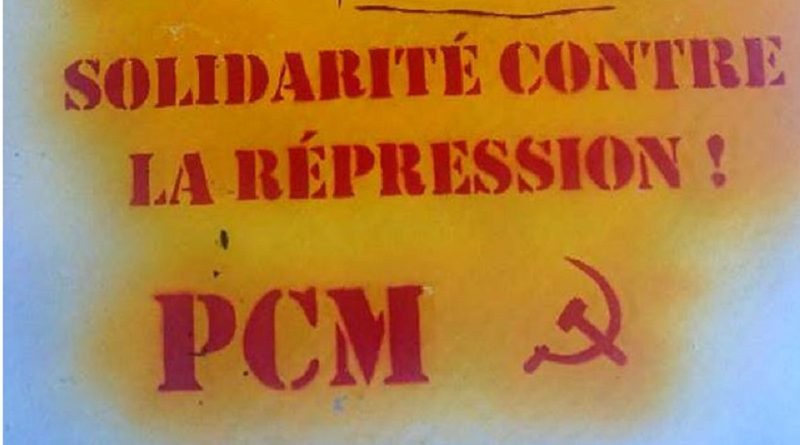 Uninvestigated murders and daily racism in the neighborhoods, drug trafficking organized by members of the BAC [a type of police patrolling the working class neighborhood in unmarked cars], systematic police violence against the Yellow Vests, rape and stockpiling of pedophile images by a DGSI officer [French secret services], assault with scissors on a minor, charges against party-goers at the Fête de la Musique leading to a disappearance in Nantes…: the list of police crimes grows daily. Every day, more people lose their illusions about the police, so much so that the slogan: “Everyone hates the police” is beginning to describe reality.

The police issue is therefore very important politically, but often handled poorly. First of all, there is a reformist political line that we can quickly dispense of, which is to say that police officers are “uniformed workers” who should be convinced to join us because “they, too, are suffering.” It is true that the police suicide rate is extremely high (but it remains lower than that of farmers, for example). What does this tell us? This profession is increasingly cut off from the life of the people. Cops lives among themselves, date each others, do not hang out with people other than their work colleagues, aware of their abject social role and the correct hatred it provokes. We will not complain, nor shed a tear about the suicides of cops.

To believe that it is possible to work with the police is a dangerous illusion. They are not our comrades. Nor are they are proletarians. The police are objectively part of the managers of the proletariat: they are its most violent part, who appear historically not to defend justice, but to protect the dominant order against rebellion. It was the role of the bourgeois militia and then the role of the different police forces that appeared in the French State, in particular under Petain (CRS [anti-Riot and anti-strike police]) and in the colonies (BAC). There is nothing to expect from these rotten people who participated enthusiastically in the deportation of Jews, Gypsies and Communists, who massacred the colonized as in 1967 in Guadeloupe, who drowned the Algerians, broke strikes, mutilated killed and raped, and continue to do so.

The second position is a left opportunist position, in its anarchist form, of making the police the main enemy. It appears at first to be more correct than the previous position, but it is limited. We have often heard Yellow Vests say that “We don’t care about the cops, we must aim at power.” It is a popular position that expresses a good idea. The police are indeed an obstacle, an opponent on the road to power. They are not the main enemy of the revolutionaries. It personalizes state power, it is its defender, but we must always be able to see through it to the targets that we are focused on: the different components of the bourgeoisie. Focusing only on an “anti-cops” struggle can not lead to decisive victories in the class struggle and in the long run, class warfare.

We understand the anger and the boundless hatred that is growing against the cops. It is precisely the work of the revolutionaries to organize this anger following a rational plan, starting from the spontaneous revolt of the masses to bring about the overthrow of the system. The situation in this regard is excellent. The movement of the Yellow Vests brought large parts of the popular masses to confront the police. Among these masses were many people who do not undergo the daily racist controls, who do not participate in traditional demonstrations – in short, who knew neither the systematic repression of the proletariat (partly stemming from “ex”-colonies) nor the anti-police leftist culture. This is particularly true for the proletarians living in the outskirts of the bigger cities, in the pavilions and the dormitory towns where the dominant figure is that of the not-so-politically-involved gendarme. The harsh repression of the movement has shown the true face of the police: people in revolt will be spared, even if they are white and wave the French flag, while the systematic violence in neighborhoods continues.

The police also tend to become more and more autonomous. All the indicators show this phenomenon. The IGPN and the government cover for every police crime without even pretending to act on them. Politicians no longer listen to critiques from bourgeois international bodies, which are usually very tolerant of police in their member countries. The worst attitudes of the police are encouraged or at least tolerated. The bourgeoisie indeed feels threatened, and the balance of power between the police and the ordering parties has been reversed in favor of the cops.

An example: two unions representing the majority of the police (Alliance and the SCPN) were able to directly threaten the government and the justice system. The reason behind their anger? The simple prospect that justice can sanction police crimes. These unions can therefore afford to do what is considered subversion in a state of law without consequence. Alliance speaks in a recent statement in very clear terms: “If our colleagues are unfairly condemned, we know what remains to be done … And our anger, no one will be able to contain it.” We are talking about a profession showered with public money, whose members arrest and take people to court under the pretext of having been insulted, and who can do anything without being constrained. Even with police offenses as easily controlled as not showing their badge numbers, unprovoked insults and lying are tolerated. Already in 2016, masked and armed policemen were demonstrating against the Elysee to ask for more weapons and more money – and it was a success. Having the ear of power, this profession is the only one to obtain union victories … but one that always goes against the interest of the people.

This is because policing is essentially a parasitic job. And this brings us back to the issue of police suicides. Cops are increasingly aware of being ticks of the social body. They do not prevent rape, drug trafficking or murder. Worse, they are themselves guilty of these crimes. Their lives are worthless and their work is meaningless and benefits only the exploiters. Hence the drift, the fascist headlong rush of a police widely voting for the far right (up to 40% according to estimates in the presidential elections). The police tend to become autonomous, politicized. Some of its members and ex-members go as far as joining clandestine fascist groups such as the Action of the Operational Forces, worrying the intelligence services. This is a fundamental tendency to fascism. Let’s remember that the former MP Marion Maréchal is now invited to Medef, the moon employer’s union’s summer program – which never happened before. The empowerment of police forces is part of this trend generated by the general crisis of the capitalist system.

It is therefore the duty of the revolutionaries to highlight the criminal role of the police, to inform and agitate around their actions, to maintain and accentuate a constant pressure on their ranks and to isolate them more and more from the people. And this, while keeping a clear course, not making the police the only enemy but a well-identified component of an intolerable social order led by the ruling bourgeois class.

Against the enemies of the people, people’s self-defense!