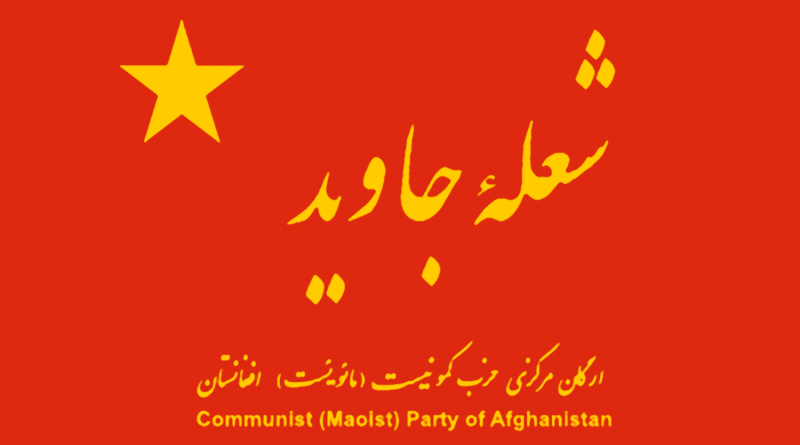 Eulogy on Comrade Zia, Chairman of the Communist (Maoist) Party of Afghanistan

The central committee of the Communist (Maoist) Party of Afghanistan with immense grief and deep pain announces to all members, supporters of the party, other Maoists of the country, parties and organizations of other countries, and the international communist (Marxist-Leninist-Maoist) movement that comrade Zia, chairman of the C(M)PA and one of its founders, and wise leader of the Party passed away due to a heart attack at the age of 68.

Comrade Zia’s life was full of revolutionary commitment and serving the people. In his early youth, he joined the ranks of revolutionary struggle against the obsolete monarchic regime. After the infamous coup d’état of 1978 and the subsequent Soviet social imperialist invasion in 1979, he continued his national-democratic and revolutionary military and political struggles.

Throughout his professional revolutionary career, comrade Zia paid relentless attention and strived for the training of youth and new revolutionary cadre. He struggled relentlessly for the manifestation of initiating a revolution based on Marxism-Leninism-Maoism and provided a model of sustained self-improvement in the fire of class struggle and in close contact with the masses.

Comrade Zia will remain in our memories as a comrade for all struggles––an immortal comrade, a tireless comrade, a comrade committed to Marxism-Leninism-Maoism that never abandoned the camp of the exploited and the oppressed.

Comrade Zia rendered a valuable service to the revolution by defining the ideological and political line of the Communist (Maoist) Party of Afghanistan. He played an important role in the conduct of the international activities of the party, whether in relations to the Revolutionary Internationalist Movement or in relations to individual international Maoist parties and organizations.

The camp of revolution lost a legendary comrade, and this is a huge loss for all of us. However, the life of comrade Zia has provided us with a model of an exemplary, committed, and true communist leadership. Comrade Zia has left behind a valuable legacy, which teaches us to never abandon our position, and always firmly stand with the proletariat and swim like a fish within the sea of the masses. He taught us to constantly challenge and rebel against the situation and solidly remain committed to the fundamental principles of the party.

Comrade Zia’s life was truly in the service of revolution and the international proletariat. In an epoch when imperialism and reaction are making an onslaught in our region and around the world, in the darkest and saddest of times, he raised the slogan of revolutionary people’s war of national resistance against imperialist occupiers, their puppet regime, and the reactionary ISIS occupiers. He made a bridge between previous and current generations of revolutionaries, and as a brilliant teacher spread the seeds of revolutionary ideas. He performed his responsibilities in this regard in an excellent manner.

Comrade Zia will live in the struggles of the international proletariat!
Comrade Zia will be immortalized in the struggles of the international proletariat!
Comrade as a true Maoist leader will remain in the history of our class!
Comrade Zia is with us!
All party units within the country and supporters of the party outside are obliged to hold commemoration ceremonies in celebrating the revolutionary memories of this comrade within a month.
Long Live Marxism-Leninism-Maoism
Long Live the Communist (Maoist) Party of Afghanistan
May the path of Comrade Zia continue forever