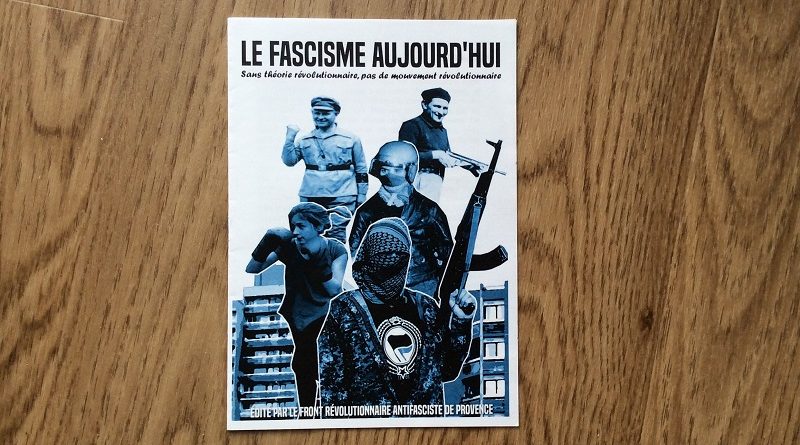 In this period of economic crisis, the contradictions between the capitalists and the people become sharper. In order to maintain and increase their economic domination, the bosses are forced on the one hand, to ramp up their attacks on the people through crushing the gains of the working class.

On the other hand, the bosses must ramp up the wars of pillage in the countries dominated by imperialism and amplify their terrorist domination over the peoples of these countries.

In the French state, the unpopular policies of the UMP, the PS, and En Marche lays the groundwork for fascism. Lately, the Socialist Party with its labor law has made good headway for the employers’ offensive against the workers. Under the guise of fighting terrorism, it has proclaimed a state of emergency which serves to strengthen the repressive state apparatus. It was the people and the progressives who were the first to be affected by this state of emergency (banning demonstrations, monitoring political activists, imprisoning revolutionary militants …) This was only the beginning, the attacks continue and amplify. Their policies continue to disarm the working class.A new labor law will emerge and the state of emergency will be the new norm … We see in these policies that the parties, either right-wing or left-wing, are gradually shifting towards fascism.

I. What is fascism?

Fascism is not a form of state power that is placed above the social classes, it’s not the taking-power of a petty bourgeoisie in revolt, nor the power of elements that do not belong to any social class. Nor is it a “gangrene” that can be eliminated without defeating capitalism. Fascism is the terrorist dictatorship of the most chauvinistic and reactionary elements of capitalism.

Fascism was born in the capitalist countries at the beginning of the 20th century, as capitalism came to the imperialist stage (when banking capitalism and industrial capitalism merged into one, thus creating financial capitalism).

“Fascism aims at the most unbridled exploitation of the masses, but it approaches the masses with a skillful anti-capitalist demagogy, exploiting the profound hatred of the workers for the rapacious bourgeoisie, the banks, the trusts, and the financial magnates and formulating the most tempting watchwords for the politically backward masses at the present moment” G. Dimitrov

The same phenomena that brought the fascists to power before are present today. The economic crisis has fueled the contradictions between the social classes, and the successive governments have played the games of fascism and have rolled out the red carpet for it.

In all the capitalist countries of the world we can observe rising fascism — taking different forms according to the peculiarities of each country. In Europe in particular immigrants and refugees are mainly targeted.They are denounced as being responsible for all the evils of society (unemployment, poor housing, misery, terrorism ….).

This rise is reflected for now in the vote for the National Front (FN) for some of the people who are distraught by the consequences of the crisis and lacking political perspectives. A wider and more determined mobilization sees that employing force could open the way to the ascension of the fascist party or coalition to the head of the state. The capitalists as a whole have not yet chosen the open fascist solution, but the threat is growing as the electoral parties fail still to resolve the crisis.

In France various fascist groups have developed and attacked the people. But the main fascist organization is the National Front.

The main enemy: the National Front.

The ideological basis on which the National Front was created is fascist. The FN is an ultra-centralized party, led by Marine Le Pen and her relatives. Her father JM Le Pen formed the party by gathering the most chauvinistic and reactionary elements of capitalism: Former collaborators of the Waffen SS, members of the OAS, former Vichy militia, Christian fundamentalists ….
The FN exerts a dominant influence on the right-wing parties and even on the other parties on issues such as security, immigration, militarism, and general social questions. It builds itself up through elections; and through its success, neo-Nazis, fascist groupings, and other nostalgic groups of Vichy France and of colonization multiply, attacking women, immigrants, Muslims, Jews, homosexuals …….

Many people see fascism only as violence and murder, but fascist violence of high intensity can only happen after deceiving a significant section of the people. Marine Le Pen sugar-coated the FN’s speech to better deceive the people about its true nature and spread its ideology in the right and left parties. The FN moves masked under a populist discourse–starting from the preoccupations of the people–and thus conceals the fundamental fascist ideology of its party. Not being in power, using multiple means to achieve it in this climate of ideological disintegration, it even succeeds in sowing doubt about its fascist character among the democrats and militants of the left! “Is this populism or fascism?” “It is a bourgeois party like the others” etc … these are opportunist, provocateur, and dangerous positions!

The objective of the FN is to win elections and gain power by expanding its mass base. In the direction of the working class, the FN runs a specific campaign for each region, revealing corruption of the elected officials, pushing against increase in taxes, against unemployment, designating the financial oligarchy responsible for the crisis, etc, in order to appear as an alternative to this crisis.

Today our main task to block this rise of fascism and the advance of the capitalist offensive against the interests of the workers is to form a broad front and to build popular self-defense.

Behind Fascism! Hides capital! The anti-fascist struggle is international!