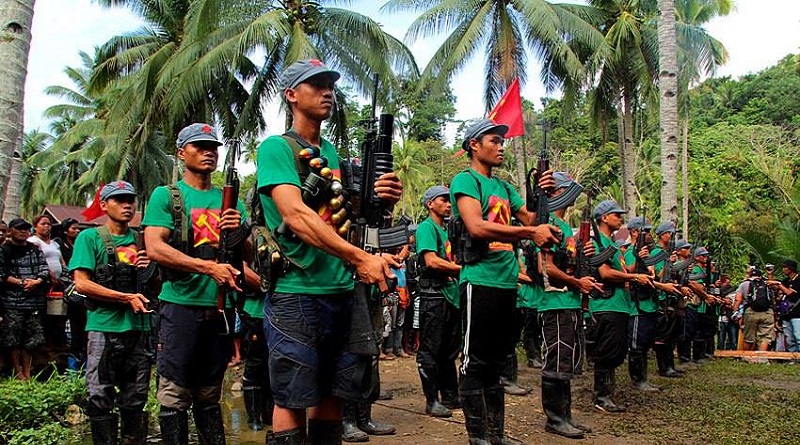 The national peace assembly and CPP anniversary celebration, hosted by 1st Pulang Bagani Battalion-NPA Southern Mindanao, paid homage to the Party’s absolute leadership of the Filipino revolution as it also condemned the unfulfilled promises of the Duterte government in granting amnesty to the more than 400 political detainees in the country and in the numerous ceasefire violations committed by AFP, PNP and paramilitary in some 500 villages nationwide.

The December 26 celebration kicked off at around 8:30 am with six platoons of the 1st Pulang Bagani Battalion-New People’s Army Southern Mindanao mounting a battalion formation at an open field some 200 meters away from the barangay covered court where the program was held. More than 200 NPA combatants stood in stiff attention amid a tactical inspection presided by NDF consultant Porferio Tuna, Jr.

In his message to the Army, Tuna hailed the New People’s Army as the true army of the masses–determined, disciplined and strong defender of the people. He also gave salute to martyred NPA commander Ka Parago who was killed in an enemy raid in Paquibato last year.

At the formal opening of the National Peace Assembly, representatives from the GRP and NDF marched, flanked by NPA guards and bearers of flags of NDF member organizations. An NDF choir sang flaming songs in chorale. A Lumad Datu (tribal chieftain) and Moro leader gave a rousing oranda (song) and prayer.

In militant dances and speeches led by NDF consultant Concha Araneta from Panay, the resounding message of the National Peace Assembly and CPP anniversary was clear: People’s War is for People’s Peace. The only way to annihilate the roots of violence and unrest is to realize the land distribution for the millions of peasants in the country, to respect the ancestral domain of indigenous people and Moro people, to abolish the wage slavery and end the exploitation of all workers, and to attain justice for all victims of human rights abuses and oppression. And the only way to pursue peace is only by waging the national democratic revolution and the people’s war.

In his audio visual message gave by NDF Chief Political Consultant, Jose Maria Sison, took the occasion to condemn the Duterte government for reneging on its commitment to the peace negotiations, particularly on the amnesty and freedom of all political prisoners. This is in violation to the Joint Agreement on Safety and Immunity Guarantees (JASIG) and to the Comprehensive Agreement on Respect for Human Rights and International Humanitarian Law (CARHRIHL). The non-release of political detainees also runs counter to the possible declaration of the bilateral interim ceasefire agreement between the NDF and the GRP and the acceleration of the peace negotiations.

In a press conference, former chief of the NDF peace negotiating panel and now senior adviser Luis Jalandoni stressed that the NDF will not lay down its arms even as it is engaged in peace talks with the Duterte government. Jalandoni also warned that as human rights abuses are perpetrated with the continued implementation of counter-revolutionary program Oplan Bayanihan and Enhanced Oplan Bayanihan, it will be forced to withdraw its ceasefire declaration to protect the masses and defend communities.

Ka Wendell, master of ceremonies of the celebration, said the communities are clamoring for an end to the ceasefire as they face threats from COPD and PDOP military troops that continue to operate in peasant and Lumad communities. Disciplined as they are, the NPA Red fighters stood ground to abide with the CPP’s unilateral ceasefire declaration and in respect to the ongoing GRP-NDF peace negotiations.

At the press conference and later at the open forum with the assembly participants, NDF leaders took turns to explain the various provisions of the next substantive agenda for the peace talks, the Comprehensive Agreement on Socio-economic Reforms (CASER).

NDF consultant Eduardo Genelsa said Mindanao continues to be resilient and to advance despite escalating enemy attacks because communists, cadres, NPA combatants, and revolutionary forces have vigorously waged the armed struggle and raised the people’s war to greater heights.

NDF leaders assert that there can be no peace until the roots of armed struggle are addressed decisively. The revolutionary forces are now stronger more than ever to wage armed revolution, gain concrete benefits for the people, and ultimately attain justice and true peace. Indeed, today’s celebration highlighted the militant battlecry: there can be no just and lasting peace without the people’s war.