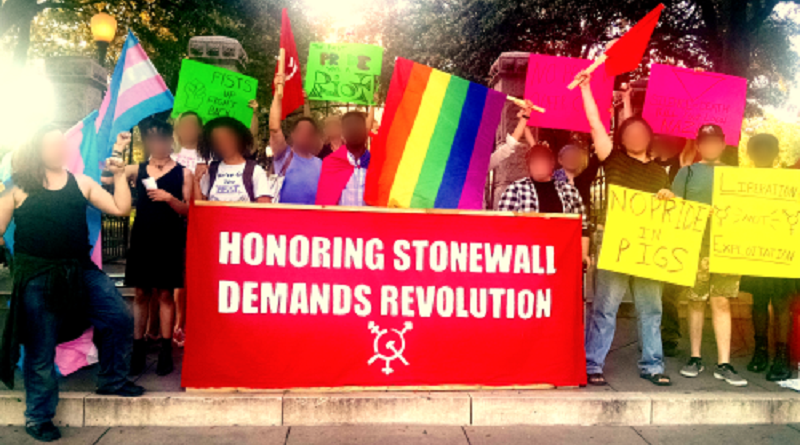 On June 28th, 2017, RATPAC called for the Stonewall Day of Revolution rally to be held directly outside of Austin Pride’s fake commemoration event.

That Wednesday marked the 48th anniversary of the Stonewall Rebellion, a violent riot against the police spearheaded by black and brown working class trans women, street queens, and “transvestites.” They were fed up with the NYPD’s routine practices of harassing, beating, strip-searching, murdering, and incarcerating lgbt people because of their clothes, their genitals, their expression, and their audacity to gather in public. In the early hours of July 28th, 1969, Stonewall Inn patrons and hundreds more from the street fought back using fists, sticks, bricks, fire, and even parking meters (as battering rams). It was a spontaneous outburst where a large number of everyday lgbt folks accepted that the conflict with the police could only be resolved through violence. It wasn’t just a riot, but a serious and successful resistance that forced the police to barricade themselves in the bar and cower in fear. The cops, whose primary job is to serve those who own everything and brutalize those who own nothing, were made to retreat. Of course, this kind of inspirational-but-spontaneous rebellion can only momentarily weaken the capitalist forces, temporarily fending off the worst perpetrators of everyday racist and patriarchal violence.

Nonetheless, the outcome of the Stonewall Rebellion sent shockwaves throughout the country, leading many lgbt workers to take a serious look at striking back at the capitalist state… not merely as an option, but as a necessity. The embryo of revolutionary struggle by lgbt folks was forming. It was being fed by a growing understanding that being docile and timid hadn’t lessened the poverty and brutality facing us, and spontaneous violence wasn’t going to win us power either. Instead, perhaps we needed to become armed, organized, disciplined, and able to start taking care of each other and our communities independent of the capitalist state.

In response to this, the ruling class was quick to send down its corporate vultures, NGOs, and establishment politicians to strangle the movement in its infancy. Pride marches–once bold political protests honoring Stonewall–devolved into parade-parties, buddying-up to big business and the government. Wealthy gays were brought to the forefront to lead lgbt people towards legislative and electoral “solutions” and to steer us away from radical organizing in our communities. The demand for “Gay Liberation” faded away, and begging for “Gay Rights” took its place. And while this built many politicians’ careers and boosted the status of many wealthy and white lgbt people, for many of us (especially those most like the women who led the Stonewall Rebellion) not a lot has changed. We’re still getting beaten, incarcerated, murdered, deported, and sexually assaulted. Not only that, these things are on the rise here in Austin within recent years. We were told to beg for individual rights instead of coming together to struggle for collective power, and today most of us are dangerously isolated and closer to fascism in this country than freedom.

Because of this, RATPAC called for the Stonewall Day of Revolution rally to be held directly outside of Austin Pride’s fake “commemoration”. No matter the lip-service they may pay to those who participated in the Stonewall Rebellion, Austin Pride stands against the broad majority of the world’s lgbt people. Rather than any rebellion, they share a legacy with the forces who worked to destroy a rising militant liberation movement and sell out common lgbt folks for the interests of a wealthy few. They use a hollowed-out image of Stonewall, a moment of radical hope for the most exploited lgbt people, to push for hopeless electoral and legislative “change.” Rather than a rainbow, Austin Pride’s true colors can be found in its sponsorship by large corporations, liquor companies, and Bank of America. Rather than waving the flag of liberation, they use rainbow cop cars to trample on it. Austin Pride has more in common with those who were having bricks thrown at them, rather than those who were throwing the bricks, during the Stonewall Rebellion. Any claim by Austin Pride to “commemorate” Stonewall is a sham.

In contrast, the Stonewall Day of Revolution rally sought to uphold the true legacy of Stonewall as a violent rebellion against the police. Literature was distributed to passerbys: a statement declaring that “Stonewall was no pig-escorted party!”, a pamphlet explaining our emergency trans housing program and organization generally, and a flyer soliciting donations for Christi Foxx Paris (an Austin trans woman and drag queen who had been beaten with a hammer and raped in May). RATPAC members also talked to as many people as possible within the Austin Pride crowd, understanding that many folks show up to Austin Pride’s events because of no visible revolutionary alternative. This is something we seek to change.

The rally not only desired to uphold the true legacy of what Stonewall was, but also the reality of what Stonewall must become: honoring Stonewall today means making revolution. It means coming together to defend and provide for each other independent of the capitalists, gay or otherwise. It means no more petitioning the state for rights that can be taken away from us, but taking the problems facing us into our own hands and finding real solutions. It means building up the community-based programs that provide the beginning blueprint of a society without lgbt poverty and brutalization. It means building up the people power capable of not only momentarily fending off the state, but permanently destroying the entire capitalist system that profits from and perpetuates exploitation and bloodshed against the broad majority of lgbt people of the globe.