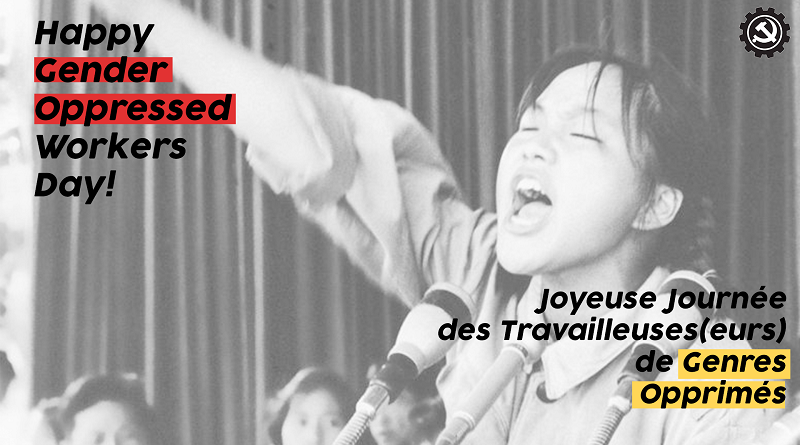 On March 8th we celebrate a Gender Oppressed Workers Day. We bring attention not only to the struggle of women in modern society, but to the struggle of all those whose who face violence and oppression for their gender. We recognize that the violence of patriarchy, misogyny, binarism, imperialism, and colonialism can’t be separated. Each is a face of the same rotten capitalist system.

It is now more important than ever in the face of reactionaries across Canada, be they men’s rights activists, the alt-right or just plain fascists, to band together and defend our gender oppressed friends, family, community members and comrades. The gender oppressed always suffer when reactionary ideology takes hold but by standing together we can smash reaction and build a better future.

Our use of Gender Oppressed Workers Day was adopted at our 6th Congress to address the historically exclusionary nature of the previous title International Working Women’s Day. Through this change and our practice as a whole we acknowledge that revolutionary struggles have not always been welcoming to trans and non-binary comrades. We also seek to recognize the history of colonialism and the erasure of identities of indigenous peoples, such as two-spirit. Nonetheless, our task has not changed, we uphold the struggles of the past and the many revolutionary victories won through the struggle of not only women but all gender oppressed people.

International Working Women’s Day was first designated March 8th by an international conference of revolutionary women in 1913. The most famous of its celebrations was the Bread and Roses strike of 1917 – a precursor to the February revolution and therein the creation of the Soviet Union. On the 100th anniversary of this event we seek to have continuity with the revolutionary tradition through our upholding of proletarian feminism, while breaking with all reactionary ideas, be they chauvinism or binarism.