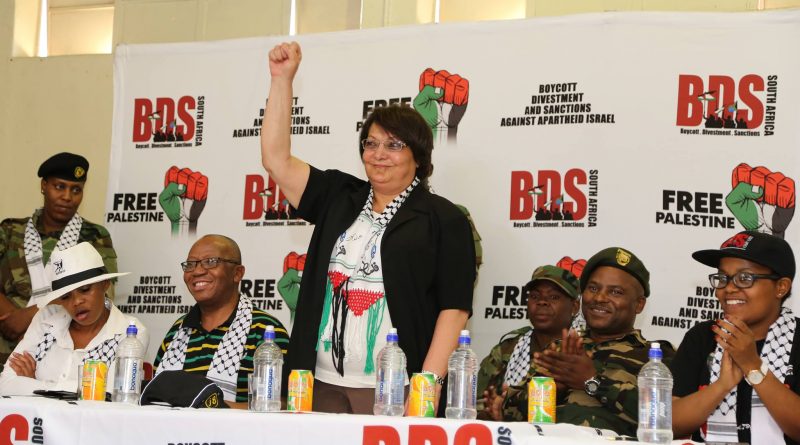 “The march of normalization organized by Zionist forces and joined by the so-called ‘Committee on Communication with the Israeli Society’ is in fundamental contradiction with the position and struggle of the Palestinian people and their national rights. This event is intended to distort and mystify the objectives of the Palestinian liberation struggle, and the struggle of Palestinian and Arab women in particular,” said Comrade Leila Khaled, member of the Political Bureau of the Popular Front for the Liberation of Palestine. “This is another fraudulent and repetitive attempt to hide behind slogans of ‘peace,’ which will not fool the Palestinian and Arab people or the free people of the world,” she said.

The Popular Front “will stand with our people and nation and all the movements and committees for the boycott of occupation around the world to confront all forms of political, cultural and economic normalization with the Zionist state regardless of the banner, slogan or phrase chosen,” she said. “This event in Jericho only reveals the incompetence and inability of these Israeli and Palestinian pro-normalization forced alike to impose the path of concessions on the Palestinian people.”

If this march is actually one of women for “peace,” she asked, “do they recognize the settler colonial nature of the Zionist project, and what is their position on the right of return of Palestinian refugees and the siege of Gaza?”

“The women of Palestine are stronger than the conspiracy of normalization. The real peace, for us in the Popular Front, will come with the end of occupation and colonialism, and this will come to pass through resistance with the goal of defeating the Zionist project on the basis of radical contradiction and confrontation, not by adapting or conciliating to its conditions and hegemony,” she said.

“We must bang on the walls of the tank,” Khaled said, evoking the classic image from Ghassan Kanafani’s Men in the Sun. “This is a dangerous and catastrophic path, especially because the name of the Palestine Liberation Organization was purposely used by this suspicious committee, which was dropped onto the organization by an Israeli parachute under the cover of its monopolistic leadership. We demand that this committee be held to a collective responsibility and accountability for its objectives and actions for normalization with the occupier.”

She called on Palestinian forces, institutions and organizations in occupied Palestine, especially the student and youth movement and the forces within the framework of the Boycott National Committee in occupied Palestine, to “to restore the popular initiative and confront these normalization movements by increasing the pace of organizing sit-ins and protest actions, giving the masses a space to participate and raise their voices and positions, beyond theoretical positions and statements.”