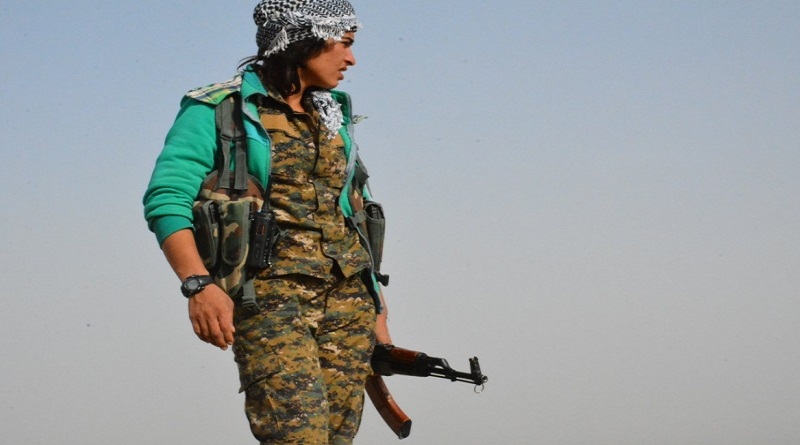 Since the US-backed Syrian Democratic Forces (SDF) launched the Euphrates Wrath Operation to combat ISIS in Raqqa, hundreds of female fighters have joined the campaign.

A main all-female force that participates in the operation is the Kurdish YPJ–also known as the Women’s Protection Units.

Cihan Ehmed, a Kurdish YPJ officer and the official spokesperson for the SDF-led Euphrates Wrath Operation, told ARA News that their female fighters have shown “an exceptional performance” in the fight against Islamic State’s (ISIS) militants.

Cihan said that the main objective behind their participation in the battle for Raqqa was to liberate women enslaved by ISIS.

“Women are playing a key role in this operation. Our female fighters are participating in this operation for one main objective, which is the liberation of women held by ISIS terrorists in Raqqa city,” she told ARA News in an exclusive interview.

“Similar to previous battles, women remain a main participant in counter-terrorism efforts in Syria,” she said. “The Kurdish-led Women’s Protection Units (YPJ) represent the determination of our female fighters to eliminate terrorism and tyranny, and ultimately accomplishing women’s freedoms.”

According to Cihan, the YPJ female fighters have been taking part in the fight for Raqqa at the frontline. She also emphasized the key role of women in this operation.

“Our fighters have joined the battle’s front-lines. The first phase of the Euphrates Wrath Operation was led by YPJ commander Rojda Felat. As the operation proceeds in its second phase, many YPJ officers and fighters continue to take part in the fight against ISIS,” the official spokesperson for the SDF-led Euphrates Wrath Operation told ARA News.

“We, as Kurdish YPJ female fighters, insist to liberate Raqqa. There are many women, mostly Yezidis, held captive by ISIS terrorists inside Raqqa. These women have suffered the most at the hands of ISIS terrorists over the last few years,” she stressed. “Thus the main goal from our participation in this operation is to free these women and protect their rights.”

“Beside the Kurdish female fighters, there are also some Arab women who have joined the Euphrates Wrath Operation. They all fight as part of the Women’s Protection Units (YPJ),” she said. “They have been fighting side by side with Kurdish fighters. They’ve shown an exceptional bravery in the fight for Raqqa indeed.”

The SDF launched the second phase of the Euphrates Wrath Operation on December 10, with the objective of securing Raqqa’s western countryside and Tabqa Dam, which bridges the Euphrates River. The SDF has so far captured more than 1300 km² in western Raqqa within the second phase of the operation. During the first phase of Euphrates Wrath, that was launched on November 6, the SDF captured roughly 560 km² of land in northern Raqqa. The long-term objective of Euphrates Wrath is the elimination of the Islamic State in its de facto capital, Raqqa city.

The Kurdish People’s Protection Units (YPG), Women’s Protection Units (YPJ), Syriac Military Council, Raqqa Revolutionaries Battalion and Tel Abyad Revolutionary Brigade are participating in Euphrates Wrath. In addition to these local fighters, foreign soldiers from a half-dozen nations are participating, either as YPG volunteers or under the auspices of the US-led coalition.