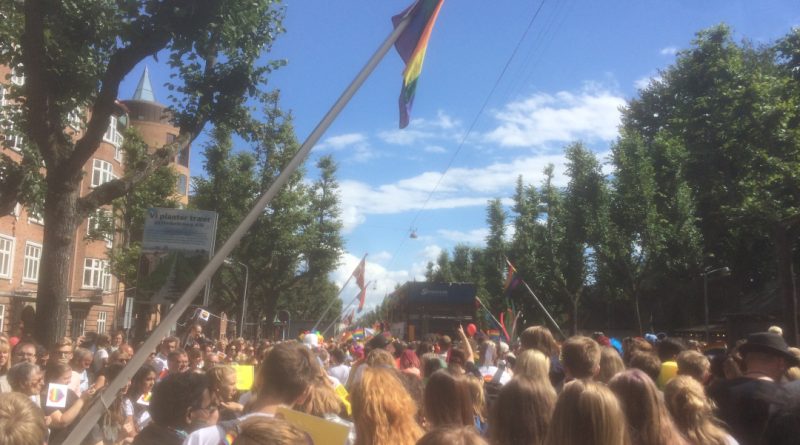 The committee for building the Red Guards Copenhagen hereby concludes its propaganda work during the Copenhagen Pride Week, which ran from the 12th to the 19th of August this year. This report is an evaluation of the week’s activities, as well as an evaluation of the Pride itself and a number of recommendations which we Danish communists ought to work according to with regards to the queer struggle in Denmark, and for the realization of our final goal—the abolition of the sex and gender system, capitalism and imperialism. All of these struggles are namely one united struggle, the struggle for the construction of the people’s democratic control of all spheres of society, no matter if we are talking about schools, nursing homes, workplaces, apartment blocs, pulic transportation, places of worship or the police. The realization of this goal, the construction of a true democracy, can only be realized through the armed and organized struggle against the systems that keep the Danish and all other peoples down, through people’s war against the patriarchy, imperialism, semi-feudalism and capitalism, and cultural revolution against the remnants of these systems until both or society and our minds are free of oppression.

Our Projects and Goals with the Pride Week

During the Pride Week, we had a number of goals for our work:

We sought to accomplish that through the following methods:

The Course of Our Work

Throughout the week, we realized that we had not prepared the work well enough, and much of the work suffered under bad preparation. Our flyers and pamphlets were only made during the week’s first days, and due to our economic situation, much of the material was in bad quality. However, we had some good conversations with the people during our work, and the materials were read by many different folks in the queer and autonomist communities.

Due to bad preparation and the personal issues of one cadre, no graffiti work was possible. Our flyer and pamphlet campaign was also limited by these conditions. One of our autonomist comrades also turned out to be unreliable, when they didn’t distribute materials due to a hangover.

All material except four pamphlets and a small stack of flyers was distributed, and a cadre wanted more flyers.

During our Pride work, our cadres and autonomist comrades also realized how deeply commercialized the Pride is. By being sponsored by big corporations such as McDonald’s or Netto, any revolutionary class perspective is ripped out of the queer struggle. Copenhagen Pride represents an opportunistic and bourgeois leadership of the queer mass movement in Copenhagen, and helps organizations such as LGBT Denmark or parties such as the Social-Democratic, Liberal or Red-Green parties mislead the queer struggle into reformism and social-liberalism instead of the revolutionary struggle which the queer struggle has historically been. In fact, the Copenhagen Pride parade is not even held on the anniversary of the Stonewall Riots anymore, which used to be its sole connection to revolutionary struggle

The Danish state also decided to further interfere with the Pride this year, and let the military police and the police loose under the cover of ”protecting the Pride against the threat of terrorism”. In reality, this kind of police and military activities are always principally meant to suppress revolutionary mass action, and only secondarily to protect against terrorism. On the contrary, it is the police who represent terror, since most queer folks from less progressive areas of the country than Inner Copenhagen propably can’t imagine a bigger threat to their livelihoods than the police and other reactionary institutions, such as the patriarchal family, which the police protects.

Evaluation and Our Future Work

In the future, any propaganda campaign must be prepared several weeks in advance, and a bigger amount of materials is necessary. Furthermore, it is important that the material is in higher quality, which can be ensured through cadre contacts or a better financial situation.

We should rely on enough sympathetic comrades that a single person’s lack of discipline will not affect the overall work, and we ought to ensure that every individual cadre’s work can be done by other cadres in the event of irresolvable perosnal problems arising.

Furthermore, we ought to always have a surplus of materials, since we need to get our message distributed as widely as possible. Therefore, we should also distribute materials in several different spaces, both radical and mass spaces. Our material must be easy to understand, concrete and revolutionary, and needs to be based on real social investigation and class analysis.

We furthermore affirm that a mass political line must be adopted by the committee-this line will guide our mass work, and must be based in our experiences from the mass work until the official founding of the Red Guards. This line must be a concrete application of the mass line as a theory in the Copenhagen context.

With regards to the Pride, the Red Guards suggest that a red and revolutionary alternative and perspective to/on the Pride and queer struggle must be developed. We seek to participate in the reformist Pride parade in the future as an organization with our own wagon in the parade (once this is economically possible), and call on other revolutionaries in Copenhagen to unite with us to achieve this goal. We will also mark the anniversary of the Stonewall Riots every year in the future, and will seek to bring the queer struggle back onto the revolutionary road. Only through communist organization can the masses, in this context the queers of Denmark, achieve significant reforms, and defend them in a way that contributes to the conquest of political power by the masses (especially the queer folks).

LET US BUILD A RED AND REVOLUTIONARY ALTERNATIVE TO THE PRIDE!

ALL POWER TO THE PEOPLE!