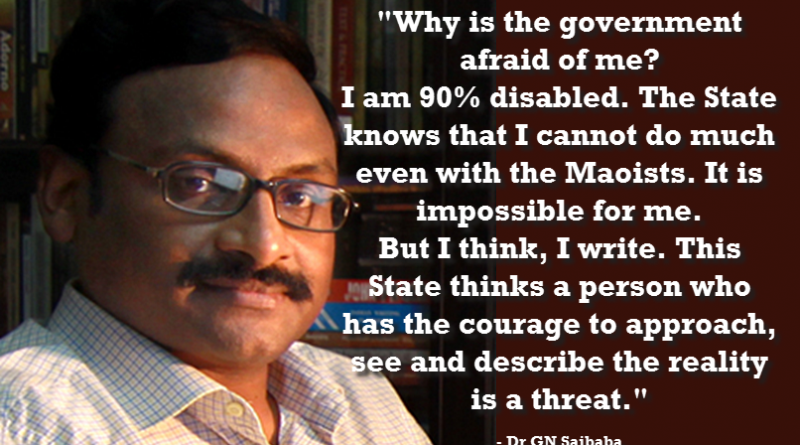 Grade 10 and 12 students at L.A. Matheson School in Surrey joined the campaign for the release of Delhi University Professor G.N. Saibaba on Thursday, March 12.

Wheelchair-bound Saibaba, who is ninety percent disabled below the waist is being incarcerated under inhumane conditions in India. This is despite the continued deterioration of his health because of 19 ailments.

March 7 marked the third anniversary of his life sentencing by the Indian judiciary that branded him as sympathizer of Maoist insurgents. The Indian government has refused to free him on humanitarian and compassionate grounds, even as UN experts have sought his release.

A teach-in was organized at the school by award-winning educator and social justice activist Annie Ohana along with her colleague Gurpreet Bains in partnership with Indians Abroad for Pluralist India (IAPI). They told the students about the case of Saibaba and encouraged them to write to the local MPs asking them to build international pressure for his release.

Ohana had also spoken at the rally for Saibaba held by IAPI in Surrey on the International Day for Persons with Disabilities in December.

IAPI members Parshotam Dosanjh and Gurpreet Singh were also present at the Thursday event that was organized as part of the Indigenous week and Ohana tried to draw parallels between the indigenous issues in Canada and India.

Saibaba has been allegedly framed because of his opposition to the repression of indigenous communities and other minorities in India. Since Maoists are fighting a class war in the tribal belt, not only Saibaba, but others like him have been frequently labelled as ultra-leftists to suppress any voice of dissent. Saibaba has been raising concerns over the eviction of indigenous peoples from their traditional lands in the name of development by the extraction industry with the backing of the Indian state.

The attacks on minorities and indigenous peoples have grown ever since the right-wing Hindu nationalist Bhartiya Janata Party (BJP) came to power with a huge majority in 2014.

Later, some of the students stuck “Free Saibaba” signs on their backs for a group picture to show their solidarity with the jailed teacher.