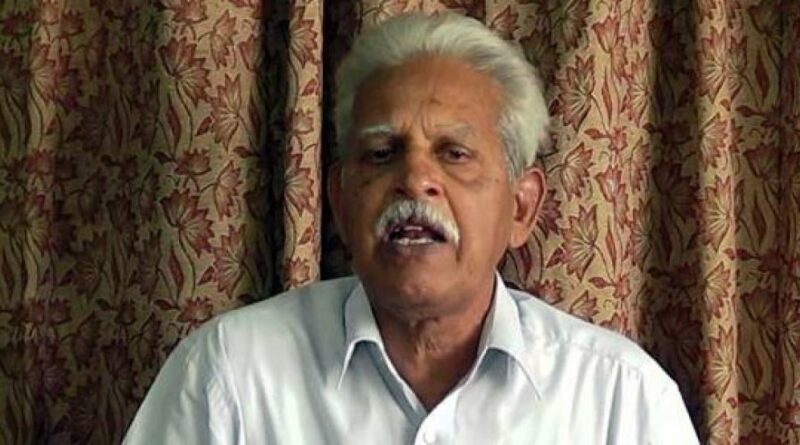 Political prisoner, poet and activist Varavara Rao has tested positive for coronavirus days after his family publicly expressed concern about his health, urging authorities to not “kill him in the jail.”

The 80-year-old activist and Telugu poet has been in jail for the past two years in connection with the Elgar Parishad case. Rao had been in Navi Mumbai’s Taloja prison where his health had been deteriorating since the end of May. He was moved to Mumbai’s JJ Hospital on Monday evening after he complained of giddiness..

“He has shown no symptoms of COVID-19 so far. He has no breathing difficulty and is stable. We will soon shift him to a COVID-19 hospital,” , The News Minute quoted Dr Ranjit Mankeshwar, the dean of JJ Hospital as saying.

Mankeshwar said that claims made by his family members that he is not getting proper medical care were not true.

“We are providing best health facilities to him and by late (Thursday) night he may be shifted to St George Hospital (another state-run hospital) for further treatment,” said Mankeshwar.

Meanwhile, shocking details regarding his health condition emerged after his family tried to visit him at the JJ Hospital. A letter by Human Rights Defenders Alert claimed that upon visiting Rao, his family members found him lying in an “inhumane condition” in a pool of urine in a transit ward with no treatment or attendant. “When his nephew tried to change his urine-soaked bed sheets, the family was thrown out by the hospital staff,” the letter, as quoted in an article on Newsclick, stated.

Rao’s family also claimed that he was hallucinating and spoke about his father’s funeral, an event that took place 75 years ago, an article in Scroll said.

Venugopal said that his co-accused and former academic Vernon Gonsalves took the phone from him and told them that Rao was “unable to walk on his own, unable to go to the loo, to wash himself or to brush his teeth.”

Rao had also needed hospitalization in May when he fell unconscious in jail. However, he was discharged within three days, after which his family had said that he was not provided proper medical treatment, The Indian Express reported.

Rao’s lawyers have tried to get him bail several times over the past 22 months, on the grounds of his ill health.

The last petition was filed as late as on Monday when Rao’s lawyers approached the Bombay High Court with two pleas, seeking temporary bail owing to his deteriorating health and a direction to the jail authorities to produce his medical records and admit him to a state-run or private hospital. The plea is pending before the high court and is likely to come up on Friday for hearing.

On 26 June, the NIA court rejected his plea on the ground that he has been booked under stringent provisions of the Unlawful Activities Prevention Act (UAPA), following which he moved the high court.

Rao and nine other activists have been arrested in the Elgar Parishad-Maoist links case, which was initially probed by the Pune Police and later transferred to the National Investigation Agency (NIA) in January this year.

The case related to alleged inflammatory speeches made at the Elgar Parishad conclave held in Pune on December 31, 2017, which the police claimed triggered violence the next day near the Koregaon-Bhima war memorial.

The police have also claimed the conclave was organized by people with alleged Maoist links.