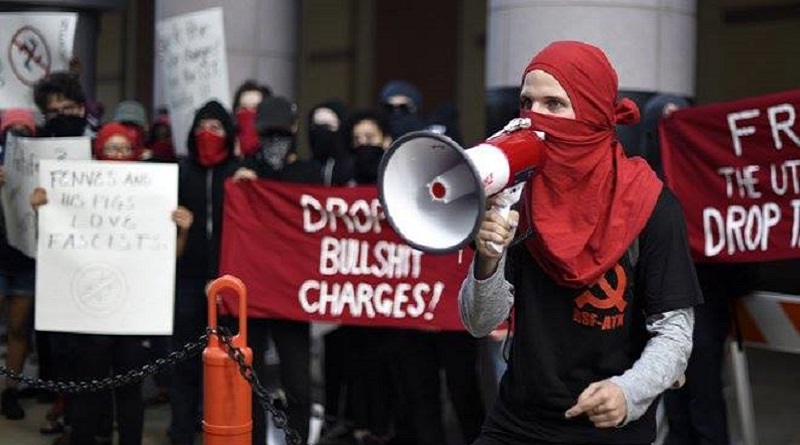 On Thursday, November 17, the Revolutionary Student Front organized a march around the University of Texas campus to demand that the University of Texas Police Department drop all the unjust charges against the UT Antifa 3. The UT Antifa 3 are community members who were wrongfully arrested and charged with felony vandalism for allegedly painting over Celtic crosses outside the Blanton Museum of Art, located on campus. The administration had allowed these neo-Nazi symbols to stay up outside the Blanton since February, despite knowing about it soon after it went up, while they were able to remove “Black LIves Matter” graffiti from Confederate monuments within hours. Their willful inaction in addressing the threat of white supremacist hate is unacceptable, but unsurprising given the racist history of the institution and the way in which hate crimes continue to be handled at the university.

Dozens of students and workers, from groups including Revolutionary Student Front – Austin, Students For a Stateless Society at The University of Texas, Palestine Solidarity Committee (University of Texas at Austin), Serve the People – Austin, Revolutionary Alliance of Trans People Against Capitalism – ATX, and International Socialist Organization / Austin branch, as well as some students unaffiliated with any group, demonstrated their anger at the UT administration’s continued accommodation of racism. The march started off campus near Dobie Mall and continued around campus and nearby streets for more than an hour, stopping at vital intersections and delaying traffic on major roads such as Guadalupe Street and MLK as large crowds watched. The pigs showed up in force, from campus, city, and state police departments; officers were watching the site even before any demonstrators arrived. Demonstrators passed out hundreds of informational leaflets on the UT Antifa 3 and why the march was being held to onlookers. Those who were initially confused at the sight of the protest quickly became indignant when they learned about UT’s actions in repressing those who dared to struggle against fascism. Though the crowd was relatively small, they had a large impact in terms of causing disruption and spreading the word about the case. This action reflects the growing wave of radical student activity appearing at UT, and we hope it will inspire students who want to take action against a university bureaucracy that doesn’t care about their needs or their safety.

The university has now covered the Celtic crosses and hired a contractor to remove them completely, but they only did this after anti-fascists took the initiative to paint over it themselves. A spokesperson for the administration tried to excuse their inaction, saying they tried to remove the graffiti the day it was noticed, but failed to remove it completely. This begs the question: after their first attempt to remove the graffiti failed, why did they just leave it at that? Why were they content with Nazi graffiti staying on campus in any form? The answer is that the UT administration doesn’t give a fuck about the oppressed students and workers who are threatened by Nazis. This was the same UT administration that didn’t punish organizations like Young Conservatives of Texas or the Fiji fraternity for holding racist events, that didn’t arrest anyone for attacking black and brown students with bleach bombs, and that let racists who threw bottles at a black student while shouting the N-word get off with just misdemeanor charges and a one-semester suspension.

The Revolutionary Student Front is uncompromising on our principle: NO PLATFORM FOR FASCISTS! We do not believe that anyone who spreads rhetoric that attacks and dehumanizes and terrorizes oppressed people should have any right to free speech. We are committed to preventing fascists from organizing and spreading their hateful ideology on campus by any means necessary. But it is impossible for a capitalist institution rooted in white supremacy like UT to say the same. A legacy of racism adorns the halls of the entire university, from Confederate monuments to buildings named after notorious racists like Robert Lee Moore, who once told a black student seeking to take his class, “You start with a C and can only go down from there.” The university depends on donations from rich bigots; this was why they dragged their feet as long as they could before removing the statute of Confederate president and slaveowner Jefferson Davis. And they are too committed to ruling-class ideas of “free speech” to crack down on hate speech. White supremacy has been part of UT’s institutional character since its founding, and it cannot be reformed out of existence. It must be destroyed, and we encourage all students and community members to be militant and persistent in this endeavor.

The UT Pig Department has not yet produced any evidence that the UT Antifa 3 are guilty of anything. This is because the three are completely innocent of every charge against them. Removing racist graffiti is an act of service to the people, not a crime. The 3 should not be facing prison time! There is only one right thing for UT to do: DROP ALL THE CHARGES!

DEFEND THE UT ANTIFA 3!
DEATH TO FASCISM!
IT IS RIGHT TO REBEL!

Donate to defend the UT Antifa 3 and other victims of state repression: https://www.youcaring.com/austinantifa-679908