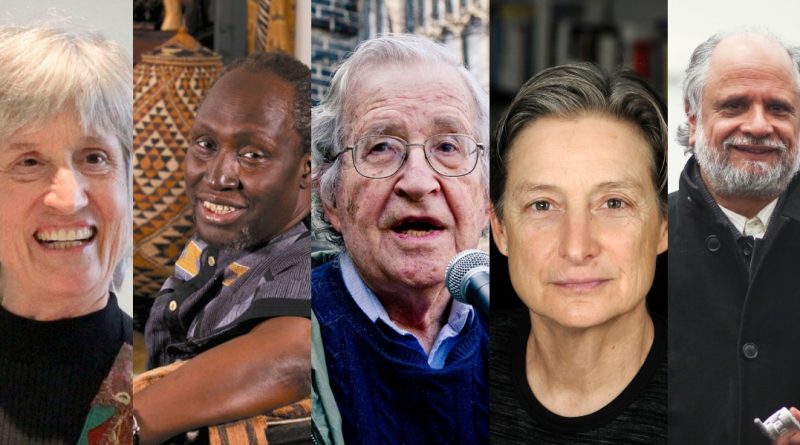 Over 130 renowned intellectuals from across the world have appealed to President of India and the Chief Justice of India for the release of professor G.N. Saibaba and activist Varavara Rao who are in Maharashtra prisons amid COVID-19 outbreak.

Among the signatories are some renowned intellectuals such as Noam Chomsky, Judith Butler, Partha Chatterjee, Homi K. Bhabha, Bruno Latour, Gerald Horne and Ngũgĩ wa Thiong’o. In a statment, they said, “Delhi University Professor Saibaba is 90% disabled with post-polio syndrome. Despite his disability, he remains tireless social justice activist and a committed human rights defender. He was implicated in a fabricated case alleging that he was “waging war against the state.” He has been in prison for the past three years.”

The statement also says that 80-year-old poet Varavara Rao is a notable public intellectual and ardent civil rights activist. “For the past 60 years he has shown a firm commitment to working for the oppressed. For the past 18 months, he has been in prison, awaiting trial. Many international scholars and acclaimed organizations such as PEN International have called for his release,” the statement reads.

In March 2017, a Gadchiroli sessions court sentenced Saibaba and four others, including a journalist and a JNU student, for Maoist links and for indulging in activities amounting to waging war against the country under provisions of the stringent Unlawful Activities Prevention Act (UAPA). Following the conviction, Saibaba was lodged in the Nagpur prison.

Meanwhile, Varavara Rao was arrested in the Elgar Parishad-Maoist link case which was transferred to the National Investigation Agency by the Centre. The case relates to alleged inflammatory speeches made at the Elgar Parishad conclave held in Pune in December 31,2017,which the police claimed triggered violence the next day near the Koregaon-Bhima war memorial. The Pune police also claimed that the conclave was backed by Maoists.

Here is the full statement:

We, the undersigned, appeal for the release of public intellectuals and social justice activists, Prof. G.N. Saibaba and Varavara Rao, who are imprisoned on fabricated cases and vulnerable to COVID-19 infection in the overcrowded Maharashtra prisons.

Indian Professor G.N. Saibaba is currently languishing in prison in India without access to proper medical care or his wheelchair. Professor Saibaba is 90% disabled with post-polio syndrome and yet the jail authorities have continually refused to provide him with assistance in moving about, even for basic bodily functions like going to the bathroom. He suffers from a number of life-threatening ailments (including acute pancreatitis, cardiac complications, hypertension, impacted gallbladder stones, fainting spells, and more) and has lost most of the functioning of both his hands since being imprisoned. The continued negligence of jail authorities is effectively a death sentence for him during the COVID-19 pandemic. We are calling on the government of India to immediately release Professor G.N. Saibaba from prison on medical bail so that he can receive proper medical treatment and be protected from the Coronavirus outbreak.

Professor Saibaba was abducted and arrested on May 9, 2014 as he left the campus of Delhi University. Police claimed that they had found documents and correspondence allegedly proving his connections with the CPI (Maoist), a banned political party in India. However, in the court proceedings against Saibaba, they were not able to produce clear evidence of this charge or the charge that he was “waging war against the state.” Commenting on the conviction, Amnesty International stated that it “believes that the charges against G. N. Saibaba are fabricated and that his trial did not meet international fair trial standards.” Regardless of the credibility or otherwise of the trial and conviction, Professor Saibaba is entitled to proper medical care and medical bail. Now with Coronavirus spreading like wildfire through the Indian prison system, this life sentence could very well become a death-sentence.

Professor Saibaba is confined to a wheelchair as he suffers from post-polio syndrome, which inhibits the use of his legs. Despite his disability, he remains tireless social justice activist and a committed human rights defender. A recent report from Scholars at Risk noted that Saibaba “worked with activists and movements to investigate and struggle against the national and multinational corporations, which extract resources from the region at the cost of the environment and displacement of indigenous communities.” Many, including internationally acclaimed author Arundhati Roy, have speculated that Professor Saibaba was arrested because of his activism and his courageous defense of the human rights of the oppressed.

In addition, jail authorities have not permitted him to send or receive letters in his native tongue, Telugu. Even when his mother came to visit him, they insisted that he speak to her only in English despite the fact that she does not speak English. Now she is on her deathbed, battling terminal cancer, while her son languishes in jail, a political prisoner denied medical care as well as the ability to communicate with many of his loved ones.

The courts denied Saibaba’s recent application for parole during this pandemic. They claimed that his brother (with whom he would stay if released) was living in a COVID-19 containment zone; however, this is not true. What’s more, it seems likely that he is at higher risk of contracting COVID-19 in jail.

Now Professor Saibaba lies in jail, frequently falling in and out of consciousness and unable to even go to the toilet without assistance, which he is routinely denied. We are deeply disturbed by the cruelty with which the Indian government and the judicial system are treating Saibaba. As his jailers have repeatedly demonstrated their inability or unwillingness to provide proper medical care to him, and because the Coronavirus is now spreading through the Indian prison system, we the undersigned call for the immediate release of Professor G.N. Saibaba from prison.

The 80-year-old poet Varavara Rao is an eminent public intellectual and ardent civil rights activist. For the past 60 years he has shown a firm commitment to working for the oppressed. Over the decades, the Indian state has been trying to silence his voice by implicating him in many phony cases. Over the past 45 years, 25 false cases were foisted against him. He has spent about 8 years in prison while awaiting trial, but was acquitted in all prior cases. In November 2018, Varavara Rao was once again arrested, this time as part of the nation-wide crackdown of public intellectuals by the Modi government in relation to the infamous Bhima Koregaon case. He is currently imprisoned in the Taloja jail, Navi Mumbai in Maharashtra, awaiting trial. Many international scholars and acclaimed organizations such as PEN International have called for his release.

Even after 18 months of judicial custody, no charges have been filed against him. It is important to note that Maharashtra has been identified as the epicenter of the Coronavirus outbreak in India. Moreover, the government admitted in a Public Interest Litigation (PIL) case in the Mumbai High Court that one inmate recently died of COVID-19 in the Taloja jail. In the context of the COVID-19 pandemic, Varavara Rao, who is suffering from multiple medical ailments, is in a very vulnerable medical condition.

Recently, on May 28, 2020, Varavara Rao fainted in the jail and was admitted to JJ Hospital, Mumbai, when his condition became critical. The government responded recklessly and he was sent back to jail on June 1st, 2020 after some preliminary treatment to stabilize his condition. The government did not even allow his family members to visit him in the hospital or talk to him over the phone. Given this disturbing situation, Varavara Rao’s wife filed a petition in the National Investigation Agency (NIA) court to release him on bail. But, the court refused to release him. Yet, Article 21 of the Indian Constitution guarantees the right to life to all citizens, including prisoners.

Considering G.N. Saibaba’s and Varavara Rao’s deteriorating health conditions and the outbreak of COVID-19 in prisons, we strongly believe that there is a potential danger to their lives. We appeal to you to release them immediately on bail to restore their right to live.