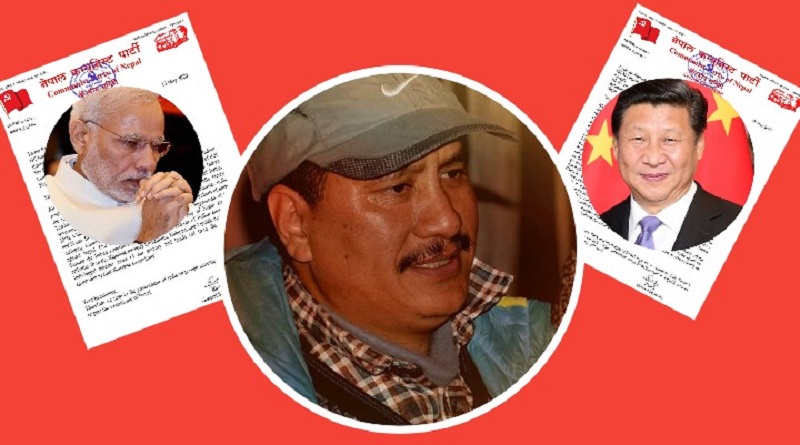 Sub: Memorandum
To the Rt. Honorable Prime Minister of India
HE Narendra Modi
through
His Excellency the Ambassador of India to Nepal
Lainchaur Kathmandu
Nepal

All Nepalese people are perturbed by the act of Indian government building Indian road into Nepalese territory in the area of Lipulek in western Nepal. On top of that the Indian government’s claim of Nepalese land Limpiadhura, Kalapani as Indian Territory causes to surprise both Nepalese and Indian people. This act of Indian government defies the norms of Sugauli Treaty of 1816, Peace and Friendly Treaty 1950, which promote nothing besides spoiling relation between two countries India and Nepal. In our view, Indian act of encroaching Nepalese land in hundreds of areas including Limpiadhura and Kalapani deserve to an Imperialist aggression of war against Nepal. Our responsible party: the Communist Party of Nepal strongly demand the Indian government for a complete withdrawal of Indian encroaching activities from the Nepalese territory Limiadhura, Kalapani and Lipulek including all Indo-Nepal boarder areas of our country and hands off from the imperialist aggression against Nepalese sovereignty.

Therefore we urge to the government of India stop such activities immediately and respect the sovereignty of Nepal.

All Nepalese people are perturbed by the India’s encroachment of Nepalese land in Limpiadhura, Kalapani and Lipulek. We believe that the government of China very well knows that India has recently inaugurated road from Dharchula India to Manasaovar of China to establish link between China and India through Lipulek the territory of Nepal, sans the recognition of Nepal, and that is completely unacceptable for the Nepalese people. China knows very well that, that land never came under the control of India and always belongs to Nepalese territory. The Indian presence in that area starts from India’s defeat on of 1962 Indo-China war. Nepalese territory extends up to Limpiadhura, the source of Kali River. Since India has stationed its military barracks in that area of Limpiadhura and Kalapani area, the Nepalese people have been protesting against the Indian encroachment. Nepalese people get surprised time-to-time by the news and reports which air in the Nepalese and Indian Medias that the government of China agreed with the government of India that Lipulek is the tri-country border.

In this reference, The Nepalese people are extremely surprised by the case that the Chinese government had come to the agreement with India in 2015 to construct a road link between China and India as two-country border at Lipulek, which is the boarder of two countries Nepal and China. China is very aware that thi-country border is Limpiadhura, the source of Kali-River, which India has been occupying since Indo-China war. The Indian government has been stationing its army barracks in that area for which the Nepalese people are demanding time and again the Indian government for its complete withdrawal from sovereignty of Nepal.

Our Party, the Communist Party of Nepal strongly demands the Indian government hands off the imperialist encroachment on the Nepalese territory. We strongly would like to make recall the government of the People’s Republic of China and Communist Party of China its responsibility to recognize the sovereignty of the neighboring countries.

Therefore we, on behalf of our Party and the people of Nepal, urge the government of the People’s Republic of China to review on Indo China agreement using Nepalese land in Lipulek area of Nepal and respect the sovereignty of Nepal.