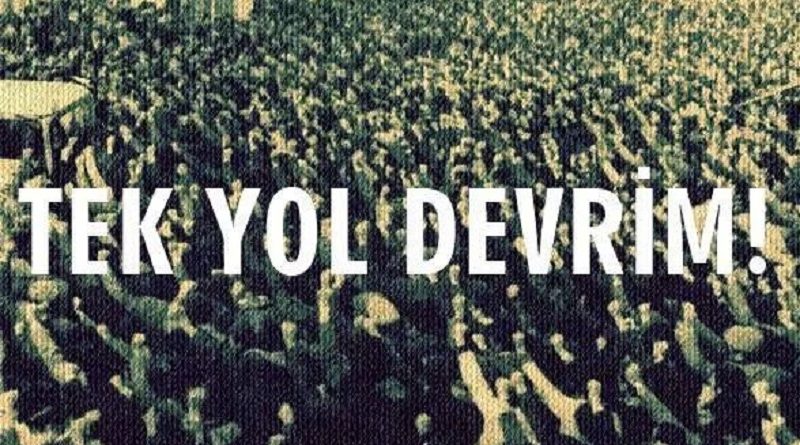 From 1920 until today, general elections have been held on 27 occasions.
In 95 years, 62 governments were established.
Where have we came to?
Our country is now a colony of US and European imperialism.
20% of Turkey’s people (16 million people) are under the hunger threshold, over 60% (48 million people) live under the poverty income limit.
The number of unemployed is 8 million. The unemployment rate among the youth is 25%.
External debt has reached 412 billion dollars.
Turkish prisons are full to the brim. 235,888 persons are subject to the terrorism of prison repression today. 540,184 persons are under “supervised liberty”.
Drugs, prostitution, gambling has gone out of hand: In the past 13 years the drug abuse increased at the rate of 1833%.
In the past 15 years only, 20,447 persons were killed in workplace homicides.
As the result of 27 general elections, this is the point the tens of establishment parties that formed 62 governments to which our people and our homeland have been brought.
62 governments are the proof that the establishment parties cannot solve any of our problems.

In spite of several showpiece impositions, the AKP[1], which is alone in government for 16 years, has not resolved any fundamental problem of our country and today it brought it into an ungovernable state. The more the hunger, unemployment and poverty increases, the more the AKP resorts to the repression and arbitrary way of governing. Using FETÖ[2] as the excuse for the state of emergency, it in fact abolished the limited rights and freedoms that existed. Prisons are getting as full as possible, hundreds of thousands of public workers are being laid off; tens of associations, magazines, journals, radio stations are being closed; law administrators are being appointed to the municipalities and institutions. As for those who demand their rights, they are attacked daily by the police batons and water cannons.
To face the growing popular reaction and deepening of the contradictions within the establishment forces, AKP fascism decided to hold early elections and to plant the people in front of the ballot boxes again.
Elections are the means of fooling the people.
It’s being set forth that the elections are means of popular participation in the government. It’s a lie.
Whoever comes, from the standpoint of the people it makes no difference and will not not make any difference afterwards. In such a way, elections in this system are known as nothing else but
the “chance” for the people to choose who will exploit them once every 4-5 years.
We are not destined to this! We are not doomed to the establishment parties. We are not obliged to elect one of the establishment parties. WE HAVE AN ALTERNATIVE.

History shows that within the parliament, the fascism is unable resolve any, but any problem of the people. Because, the ones who create problems, cannot resolve them!
The place called Turkey’s Great National Assembly is not composed of people’s representatives, it is composed of the bourgeois representatives approved by the establishment parties.
All of them defend the establishment. Some of them make up the opposition, but it is only for show.
However

THEY ARE ALL LIKE-MINDED.

When it comes to dependence on the imperialism to carry on with the system of exploitation and to continue with fascism.
This is what the AKP has done in the last 15 years.
Well, what did those that call themselves the opposition do in this period? Ask them: “What did you do for which problem of the people?” Who can abolish the panorama of impoverishment, hunger and unemployment? NOBODY!
Because for this, what takes people’s needs and benefits as a foundation requires a pro-socialist, pro-independence and pro-democracy government.
Is there something that will be able to cut all relations of the economic dependence on imperialism? While the homeland’s riches are being given as a gift to the imperialist enterprises and their middlemen, the people’s poverty cannot be done away with!
They created a country where the breath we inhaled, the medicine we took, the clothes we wear, everything we eat and drink is set to fill the imperialist cash registers. They wrecked the agriculture, they made us forget the smell of tomatoes, peppers, meat and cheese. The richest lands in the world were given to the imperialist mining companies, thousand year-old olive groves were ruined. Rivers and forests are being pillaged.
Because of “the state of emergency” they outlaw workers’ strikes. They did not even leave to our youth the possibility to fantasise about the future.
Those that do not know the values of their own people create drugged and decadent youth. Especially in front of every school, in every corner of the poor neighbourhoods where the people’s struggle increased, drugs are being distributed under police protection.

301 miners were killed in Soma. There is no justice… In Torunlar İnşaat’s elevator fall 11 workers died. No justice… Cizre, Nusaybin, Sur and tens of towns and villages… were destroyed by tanks and cannons. No justice… Berkin Elvan, Dilek Doğan, İnanç Özkeskin, Sıla Abalay and many more… They are being killed by the police bullets in their houses and neighbourhoods. Herds of assassins are strolling around with their fingers on the trigger… No-one was called to account at a trial hearing, there is no justice… In a year 1,500 workers have been killed in work homicides. Not one employer was arrested. There is no justice.
Let us ask and see: “Is there someone within the establishment parties who can promise us justice for all this?”
No! No-one even promises justice. Establishment parties are not even mentioning this.

NO ESTABLISHMENT PARTY CAN BRING CHANGE!

LOOK AT THOSE WHO WANT A VOTE FROM OUR PEOPLE!

Recep Tayyıp Erdoğan is responsible for all massacres, hunger, poverty, decadence, and people’s difficulties in the past 16 years. He is the main murderer, main thief!

Meral Akşener[3] is a bloody-handed fascist who defends all massacres and brutality carried out against the Kurdish people before the 1980s by the fascist MHP; who carried on with the fascist terror, executions and massacres in the period when she was Minister of The Interior. Being against the AKP is not enough to make her a democrat!

As for Temel Karamollaoğlu[4] it is enough to remember that he was one of those responsible for the 33 people that were killed in the Madimak hotel massacre in Sivas, in 1993.
Doğu Perinçek[5] spent his life since 1970s until today as enemy of and informant against revolutionaries and organised forces of the people.
While saying “there is no right or left”, while saying that he will “call to account” the exploitation and the oppression, Muharrem İnce[6] who tries to prove himself to the bourgeoisie and get elected, who doesn’t utter a word against imperialism, just like Ecevit, he is nothing other than a bourgeois politician that will carry on with the fascism.

Selahattin Demirtaş [7] is an establishment politician who tolerates every kind of humiliation in order to make “peace” with AKP fascism, and who perceives the collaboration with the USA as legitimate. The people will not give any vote to make peace with fascism nor to become a soldier of the USA. The Kurds demand a reckoning for their blood flowing in streams, for the children lost, for destroyed towns, for erased identity, for language suppression and for its future. Are they going to demand it in the parliament?

While people were being killed in Sur, Cizre and Roboski, while the miners were killed in mines, while workers suffered attacks in Yüksel Street and on the First of May, while tens of thousands of workers are being thrown out of jobs, WHICH ONE OF THEM DID THAT IN THE PARLIAMENT?

PEOPLE’S PROBLEMS CAN BE RESOLVED BY THE PEOPLE

Labourers, public workers, engineers, lawyers, peasants, students…
Our people of any nation, any faith, any profession!
The ultimate solution for the people’s problems is possible with PEOPLE’S POWER established through and together with the REVOLUTION.
The people will participate in the government, in PEOPLE’S POWER, by the means of its own parliaments.
By establishing People’s Assemblies as of today, we can wage struggle for our economic, democratic, political, social and cultural problems and demands.
We can become powerful by organising labourers of all faiths and nationalities in their own self-organising People’s Assemblies.
We can resolve our problems by debating it, making decisions and carrying them out on our own.
We can produce solutions that were organised in the People’s Assemblies against the poverty, drug addiction, hunger, and decadence.
We can wage struggle for the justice through the People’s Assemblies. In order to resolve economic problems we can organise solidarity and sharing by the means of People’s Assemblies.

Against imperialism – Independence!
Against fascism – Democracy!
Against capitalism – Socialism!
The oligarchy’s parliament cannot resolve any problem.
Let’s not elect any of the establishment parties:
Let us organise in People’s Assemblies in order to resolve our problems!
Let us build up our struggle in order to achieve our liberation!