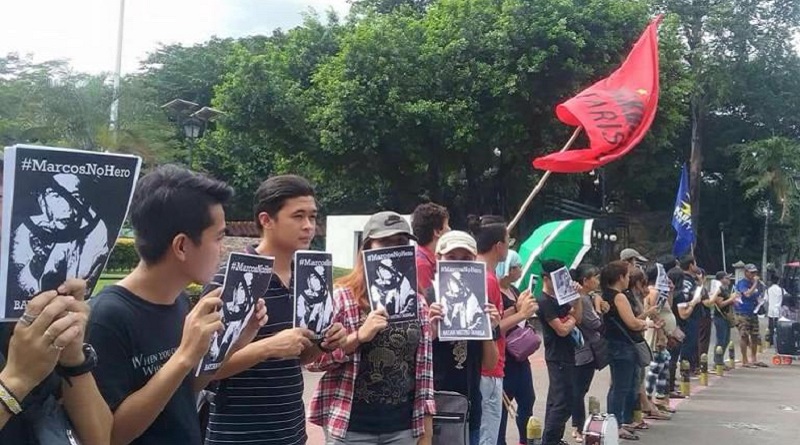 “This hasty burial today proves how the Marcoses fear the people’s protest.”

In Metro Manila, hundreds of progressives went out into the streets at noon to join the #BlackFriday protests: along Taft avenue in Manila, in Philcoa along Commonwealth avenue in Quezon City, in Monumento in Caloocan City, in Marikina City and in Alabang Plaza in Muntinlupa city. Students of the UP-Los Baños in Laguna province also held a unity walk at noon, condemning the burial.

Recalling the horrors of martial law attributed to Marcos, activists also pointed their anger at President Duterte who supported the Marcos family’s wish, and the Supreme Court which recently ruled allowing the burial, which progressives said leads to “perversion” of history and the nation’s values.

“This burial today proves how the Marcoses fear the people’s protest,” said martial law survivor Bonifacio Ilagan of the Campaign Against the Return of the Marcoses in Malacañang (Carmma). He called the burial “an official rehabilitation of the Marcoses.”

“He was buried in LNMB,and government itself recognizes him, thru the Supreme Court and thru the sitting president, Rodrigo Duterte, giving political capital for Bongbong Marcos to run — not as vice president — but as president in the next elections,” Ilagan said.

Ilagan cited the suspicions held by many since 1993, when Marcos’s remains was brought from Hawaii to his hometown in Ilocos Sur province, four years after he died in 1989.

“With this burial of a body — if it is indeed a body, because some says it’s only a wax replica and the real body has been buried in Batac… Whatever it is, it is proof that the Marcoses have lived and maintained themselves through faking and lying, and this is what they have imposed upon us: history that is not true, values that are perverted,” he said.

In front of the University of the Philippines-Philippine General Hospital (UP-PGH), hospital workers along with medical students, martial law activists and other progressives lined up along Taft avenue, chanting “Marcos no hero! No honor!”

“The issue here is not just about burying one body or following the whim of a family – but about the Marcosian line of thought that the country will only develop under the rule of one strongman, and that this leader cannot be questioned because he has all the ‘good intentions,’” he said, apparently hinting at Duterte’s own notorious statements about killings and the suspension of the writ of habeas corpus.

“As Marcos used to say: “I know what is good, I know what is right,” and declared himself president, legislator, judiciary and all. This line of thought will continue if we do not resist this official rehabilitation,” Ilagan said.

Timothy Rivero, a campus journalist of the publication “The Torch” of the Philippine Normal University, called the Marcos burial “a crime against the teaching profession.”
“How can we teach this to students? How can we explain about martial law, when the government itself recognized and honored him (Marcos)?” he said.

“We mourn today, we rage, because this is a dark time in our history. But we will also hold this system accountable for giving birth to regimes which all benefited from Marcos’s legacy, and has now rehabilitated the Marcoses,” said Tinay Palabay, secretary general of Karapatan.

“Government has turned its back on the people, just like how it continues to implement neoliberal policies of privatization of education and health services,” said George Jimenez, a UP Manila student leader, during the protest. He recalled how the now-underground youth organization Kabataang Makabayan was formed in 1964 and later mobilized scores of youths to fight during martial law.

“Even when government has turned its back on us, the youths and the people will rise up to fight the decaying state,” he said.