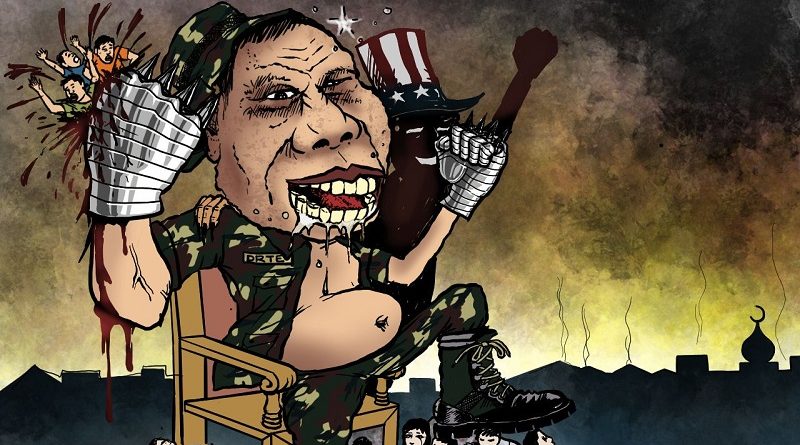 Rodrigo Duterte is obsessed with his strongman ambitions. He is set on establishing himself as a fascist despot. His resort to tyranical methods has heightened since having unravelled as a camp-follower of the US imperialists. He has become ever more brazen and unapologetic in carrying out repressive policies and measures.

He has escalated the campaign of extrajudicial killings against street peddlers and users of shabu. He expresses satisfaction over news that more than a hundred have been killed by his police in three days. He has publicly applauded the murderous rampage of his police force and has repeated his vow to save them from punishment, stoking greater public indignation after police were caught on camera manhandling a 17-year old boy prior to his fatal shooting. There is widespread clamor for justice for all the victims of Duterte’s anti-people “war against drugs.”

Duterte is himself rousing widespread public suspicion that his “war against drugs” is nothing but a smokescreen for a major turf war among major drug syndicates, and that he has been using the police to provide favor and protection for one syndicate against another or that he himself a drug kingpin. Employing trusted and tested police officers, he liquidated the Parojinogs of Ozamiz City, long known for controlling the illegal drug trade in large parts of Mindanao and elsewhere.

He has likewise used his war against drugs as a blanket tool against his political rivals. He brandishes his thick book of dossiers of supposed drug personalities which not even the police chief can cite a basis for. He has arbitrarily included and excluded people and has used the list to armtwist rivals with threats of killings showcasing the Parojinogs and Albuerras in order to force them to accede to his political and criminal agenda.

The brutality of Duterte’s “war against drugs” is matched only by the brutality of his all-out war against the revolutionary forces under Oplan Kapayapaan, his imposition of martial law and suspension of the writ of habeas corpus in Mindanao and the anti-Moro war and siege of Marawi. In the countryside, the military rules and respects no rights or freedom. Killings of peasants and national minorities run unabated. It has relentlessly carried out aerial bombings, shellings and strafings of civilian communities. Almost a million people have forcibly evacuated.

Duterte has used his congressional supermajority to earn approval and extension of his Mindanao martial law. He has also rammed through his new tax laws and is seeking rapid approval of his 2018 budget. With complete or nearly complete control of congress, Duterte aims to push for charter change to enshrine the neoliberal policies of liberalization, privatization and deregulation and realize his ambition of completely monopolizing power under the guise of establishing a federal government.

Duterte wants everyone to remain silent and blindly accept his planned infrastructure binge with all its burdensome debt deals and commissions. He has repeatedly threatened the Supreme Court against issuing TROs and had his political allies file an impeachment case against the chief justice. Threats of impeachment have also been dished out against other officials who have not been cooperative with the Duterte regime such as Ombudsman Conchita Carpio-Morales.

Duterte has completely abandoned his cordial relations with the national democratic movement having failed to entice the people’s revolutionary forces to silence their guns in a protracted ceasefire prior to substantively addressing the roots of the civil war. His congressional swines have voted to reject the appointment of social activist Judy Taguiwalo as social welfare secretary, signaling his termination of earlier efforts to explore a possible alliance with the Left. He has repeatedly declared he no longer wants peace negotiations with the NDFP.

The Duterte regime has carried out policies that favor foreign big capitalists, bourgeois compradors, big landlords, bureaucrat capitalists and the fascist military and polace. It plans to impose additional tax burdens and pursues a debt-driven infrastructure program which are bound to be detrimental to the people’s welfare. It has waged wars of death and destruction against the people, especially against the peasants, the Moro and national minority peoples, the workers and the urban poor.

As a result, the Duterte regime has become increasingly politically isolated from the people and has resorted to more and more tyrannical measures to perpetuate itself in power. No amount of media and social media manipulation and news and public opinion fakery can withstand the assertion of the truth concerning the concrete conditions of the oppressed and exploited people.

It is the task of the Party and revolutionary forces to unite all sectors in a broad people’s alliance, provide it core strength and leadership in the struggle against the US-Duterte regime’s tyrannical, criminal and corrupt rule. Indeed, many of the Duterte regime’s victims are now rising from the depths of fear and raising their voices against his regime.

The mass organizations and alliances must unite and mobilize the people in greater numbers by intensifying the mass struggles of peasants, workers, students, the urban poor, the women, the Moro and minority peoples, the church people, teachers, the migrant workers and their families and other democratic sectors and groups. They must carry out mass struggles and campaigns along anti-imperialist, anti-feudal and anti-fascist lines.

They must give attention to waging a propaganda offensive against Duterte’s demagoguery. They must encourage, unleash the initiative and give full swing to their members and their mass base to confront and confute Duterte and his band of paid trolls in all forms of media. They can do so by carrying out regular educational discussions among their members and the masses in the factories, communities, schools, offices and so on.

The broadest possible online network of activists, propagandists and members of the national democratic mass organizations must be built.

Under the direction of the Party, the New People’s Army (NPA) must continue to seize nationwide initiative, carry out more and more tactical offensives, increase the number of its weapons and arm a rapidly increasing number of new Red fighters.

Every successful tactical offensive of the NPA helps shatter the climate of shock, awe and fear imposed by the regime’s brutal war and, in turn, instills fear on the drug-crazed Duterte. The victories of the NPA inspire the Filipino and Moro people to wage mass struggles and armed resistance against the US-Duterte regime.