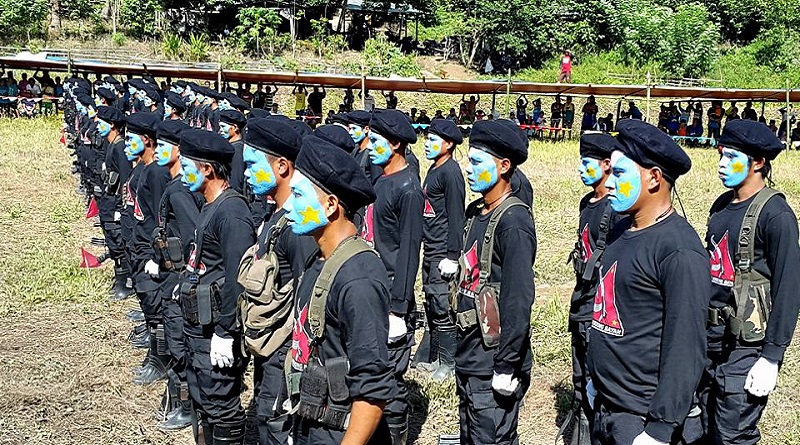 We, the CPP-Regional Committee of North Central Mindanao Region (NCMR), ecstatically commemorate today the anniversary of the rebuilding of the Communist Party of the Philippines and render our salute and cheerful greetings to all the Cadres and members of the Party, all the Red Commanders and fighters of the New People’s Army (NPA), all activists and members of various revolutionary mass organizations, and all the friends of the revolution for another year of success in gaining advances to our continuous people’s democratic revolution.

We have achieved these advances due to the sacrifices and persistent labor of all those affirmed in achieving the realization of this year’s plan. And we also consider these victories worth to be offered into all of our revolutionary martyrs whose sacrifices have brought us into this stage of our struggle. To the four who fell during a nasty raid in Sitio Kihinggay, Brgy. San Pedro, San Luis, Agusan del Sur last August 20 of the current year, we give our highest salute and offer a few moments of silence…

On the one hand, with more than a hundred days since the CPP and National Operations Command of the NPA declared its unilateral ceasefire in response to the unilateral ceasefire ordered by Government of the Republic of the Philippines (GRP), this has been the longest in the history of the Philippine peace negotiations. This, in spite of the fact that the AFP, the PNP, the CAFGU and the military-backed bandit groups relentlessly launches brutal combat, intelligence and psywar operations under the banner of Oplan Bayanihan that the Duterte regime perpetuates after replacing BS Aquino’s regime. The CPP-NCMR is commending the NPA in strictly abiding its unilateral ceasefire despite the provocative acts of the enemy. Up to this very day, no record of ceasefire violation was committed by the NPA not only in the region but throughout the Philippines. The NPA is clear-headed enough in providing an adequate atmosphere so that the GRP-NDFP talks would succeed in Norway.

With the continuing peace negotiations and unilateral ceasefires, we must be vigilant and we must alert all revolutionary forces in NCMR of the alternating provocations of the enemy in the war field as they attempt to bait the NPA into retaliatory attacks and thus annulling the ceasefire. Since August 22 up to this date, no less than 80 remote villages from 22 towns within the four provinces of Agusan del Sur, Agusan del Norte, Misamis Oriental, and Bukidnon have been infiltrated, encamped and operated by the AFP combat troops.

The protest actions launched by the residents of the said communities are gaining ground after they suffered harassments and their rights violated and abused with the military in full battle gear and into encampments that lasts more than just weeks, treading their barrios and communities. More residents are jointly and bravely conducting dialogues-confrontations against enemy troops through petition signing, lobbying the LGUs, exposing to the public and other forms of struggles in order to ward them off from living on the villages. These efforts by the people also manifest their vibrancy in supporting for the success of the struggles by the GRP and NDFP negotiating panels in their pursuit for the realization of a just and lasting peace on the negotiation table. The people are well aware that if the enemy troops are unimpeded in trampling the rural villages and in scouring jungle areas they believe where the NPA are positioned, a resurgence in armed skirmishes between the NPA and the AFP-PNP-CAFGU could most likely arise and could possibly derail the ongoing peace talks.

On the other hand, the CPP in NCMR is proud to dispatch to its constituency in the region the all-round advance it has achieved for the entire year 2016 in launching the protracted people’s war. In the ideological field, for the three-level Party courses, 1,032 members and potential Party members have graduated from the 44 batches of the Basic Party Course while nine batches consisting of 295 cadres and members of the Party have completed the Intermediate Course. The third batch of cadres tackling up the Advanced Party Course in on its way.

Due to these sustained ideological studies, our putting of Marxist-Leninist-Maoist theories into concrete revolutionary practice in NCMR have been relatively adept and precise. We have sharply pointed out the errors and correctly revealed and applied the 15-year lessons [since 2001 till 2016] of the summing-up of the region’s revolutionary practice. Successive conferences and meetings of the various fields of work have also been a big help in pinpointing and resolving problems and obstacles to accomplishing many tasks. These also comprehensively shed light to the regional situation and has materialized the plans for various fields such as handling of bourgeois elections, in the military arena, the open mass movements and campaigns, among others.

The Ang Bayan (AB) fortnightly and the national and regional Party and NPA statements downloaded from time to time from the Philippine Revolution Web Central [PRWC] are translated and/or relayed to Party and NPA units as supplemental study materials. We have also embedded lessons and theories derived from practice into Party cadres residing and leading the platoons by launching batches of the Basic Platoon Officers Course [BPOC]. Ideological struggles are also very much alive making the Party life vibrant and struggling for correctness.

In the organizational field, Party members are still on the increase especially with their Party branches in the locality rising up by 31 percent. Promotion of Party cadres are also sped up and they are assigned into a number of territorial Party committees, into the broadening and increasing units of the people’s army, into the organic staff, into the established organs of political powers and into the mass organizations. Quoting Stalin: “After setting out the correct political line, the work of the organization would now be decisive to all, even the direction of that political line— either its victory or defeat.” Accordingly, Party units and individuals are continuously and consciously striving how to combat bureaucratism, ultra-democracy and liberalism within the organization.

In the political field, there is a consistent 16 percent gain in the number of full-time Red fighters corresponding to a 13% increase in new platoon formations. They inter-operate with the much-increasing flanks and formation of the People’s Militias up by 41 percent. They have successfully launched 109 tactical offensives even before their unilateral ceasefire was declared August 21 of this year. As a response to the increase to platoon formations, the number of barrios within its operation has gained a 7 percent increase, now being favorable to the maneuvers of our people’s army.

Within this ceasefire period, our people’s army continues to keep up with the tasks mandated to them such as doing mass work, maintaining peace and order in the vicinity of its territory, implementing tax policies by the revolutionary government, cultural work, food production and continuous politico-military training. For maximizing the ceasefire, seven batches of the Basic Politico-Military Training [BKPM] had been launched, participated by their Red commanders and fighters and by the People’s Militia.

The urban revolutionary mass movement is all the more striving for its contribution to the advance of the region’s armed struggle. It has broadened its ranks among the workers, the urban poor and the petty-bourgeoisie while it caters their sectoral and class demands. It has also contributed to the strengthening of the armed struggle in the countryside through the recruitment of the youth into the People’s Army.

The mass base has also widened and deepened. Our organized masses have risen by 26 percent. This also corresponds to a 53 percent increase in the number of organs of political power while sectoral chapters have been increasing at 36 percent.

This year, anti-feudal mass movements got invigorated. Seventy-one events in total had been launched. This number excludes anti-plantation, anti-demolition and anti-drought mass movements in their thousands. It encompasses 264 barrios within 26 towns and six cities from the four provinces of the region. It is joined by 60,000 peasants and farm workers wherein 200,000 have directly benefited. From barrio up to the provincial and regional levels, we have witnessed mass movements widely being launched.

In the fight to counter the drought, more than 15,000 sacks of NFA rice were received by the masses in protest to demand the food ration by the NFA, DA, and the LGU in several towns, cities and provinces of the region. The aftermath of the Kidapawan massacre last summer has primed the masses’ resolve to be militant in demanding food aid from government agencies. Add to this the 1,364 sacks of rice confiscated by the guerilla people’s army in South-Central Bukidnon from the warehouse of a landlord-merchant-usurer in Valencia City last April 18.

Organized evacuations of barrio and Lumad community residents occur during military operations and harassments by the bandits they are supporting. Keeping with the lessons of the previous experiences, seven instances of organized mass evacuations have been undertaken for the year 2016. These evacuations and the matching attacks against peasant and Lumad communities have caught the attention not only of the local and national, but also the international arena of public opinion. Successive Lakbayans to the national capital was launched since last year and still this year. In Mindanao and in our region in particular, a swelling number of Lumad and peasant masses have gone down there. This year, the Moro masses have joined since they also have been victimized by land-grabbing of their ancestral lands, state fascism and discrimination.

Study-instructors are enjoining in providing PADEPA themes, Ang Bayan articles, national and regional CPP and NPA statements to the locality. Audio-visual aids using high-tech amenities are providing mass educations ease in understanding. The mass lectures are becoming integral in the rapid arousal, organizing and mobilization of the masses among their ranks.

But with the all-round achievements we garnered this year comes our appraisal of our capacities and potentialities in striding and leaping forward; we have not yet been out-and-out. In several instances, we can still witness some who have been at ease with what we have accomplished – still attaching to the old practice of organizing the people at a slow pace which was long been debunked as snail-paced advance and has been proven ineffective. The CPP-NCMR hopes that with doing away with empiricism and holding fast the key concepts of arousing, organizing and mobilizing the masses in all fields, we could hurdle several-folds in upturns as results to our fervent work, skills training and potency in the coming year and the next few more. Combat and do away with the erroneous tendencies of empiricism, conservatism, localism, guerrilla-ism, bureaucratism, ultra-democracy, and liberalism within the organization and our slack in keeping with our points of discipline. Let us thoroughly launch rectification, advance the all-round development of the revolutionary situation of the region in order to take part in the nationwide endeavor of raising the level of our people’s war.

Finally, with months already the Duterte regime is sitting in power and with the persisting unilateral ceasefire, the revolutionary mass movement in NCMR is vibrantly carrying its banner forward and continues to rise in the field of armed revolution. To whatever we will be attaining from the peace negotiations, if the negotiating table fails to resolve the social and economic roots of the Philippine civil war, our struggling people in NCMR led by their Communist Party of the Philippines will maintain the call to arms to further its agenda.

Long live the 48th anniversary of the rebuilding of the Communist Party of the Philippines!

Realize a just and lasting peace!