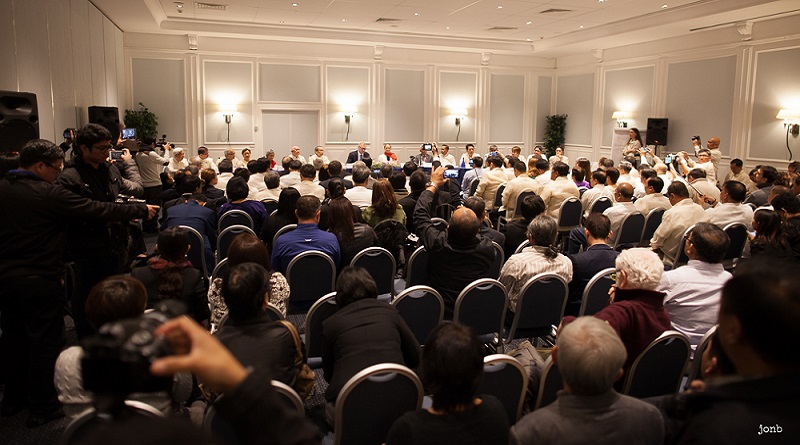 Speaking in behalf of the RNG, Ambassador to the Philippines Erik Førner and Special Ambassador to the Philippines Peace Process Elisabeth Slattum, congratulated the Parties in the negotiations for their commitment and hard work in the previous two rounds and assured both sides of the RNG’s continuing support to the GRP-NDFP peace negotiations saying that “we are here for the long haul.”

In his opening statement, NDFP Chief Political Consultant Jose Maria Sison laid out the over-all perspective of the NDFP on the prospects and likely course of the peace talks.

He said, “I continue to declare that the two negotiating panels can negotiate in a non-adversarial way and overcome any obstacle by addressing the roots of the armed conflict and seeking to satisfy the demands of the people for basic social, economic and political reforms in order to lay the foundation of a just and lasting peace and build a Philippines that is truly independent, democratic, just, prosperous and progressive.”

He revealed his recent telephone conversation with President Duterte in which they “discussed in earnest how to make the negotiations successful.” He also expressed his appreciation for President Duterte’s public announcement of the latter’s wish to have a meeting with him after the third round of talks in a third country and take the necessary measures to ensure the further advance of the negotiations.

Addressing this point, Agcaoili emphasized in his opening speech, “We clearly state today that the release of the above-mentioned political prisoners should not be seen as a mere confidence building measure or a gift to the NDFP. It is a matter of justice and an obligation of the GRP under CARHRIHL. Neither should the political prisoners be treated as trump cards to extract concessions from the NDFP. Such conduct is bound to further erode mutual trust and confidence.”

Sison expressed confidence that agreement on SER can be finished in 6 months. “Both RWCs have already fleshed out the common outline of the Comprehensive Agreement on Social and Economic Reforms (CASER) and can indeed make a significant headway in the current round in reconciling their respective draft and agree on how to accelerate the unification of the drafts by holding bilateral draft sessions by teams before the fourth round.”

He further stated, “With regard to political and constitutional reforms, the NDFP holds the view that there are good and viable examples of both unitary and federal forms of state.”

He explained, “The NDFP is willing to maintain its alliance with the GRP and the Duterte administration in particular by cooperating in the founding of the Federal Republic of the Philippines, creating a parliamentary system and making a new constitution that upholds, defends and promotes national independence, democracy, economic development, social justice, cultural progress, independent foreign policy and international solidarity with peoples and all countries for peace and development.”

For his part, Agcaoili reaffirmed the willingness of the NDFP panel to accelerate the process of forging mutually acceptable comprehensive agreements on SER and PCR “so that we can move on to the phase of implementation within the period of the Duterte government.”

Explaining why there has to be a period of successful implementation of the CASER and CAPCR for at least 2 years, he said, “We must prove to our people that these negotiations will indeed bring about genuine change. They are tired of broken promises from politicians and the failed policies of previous GRP regimes.”