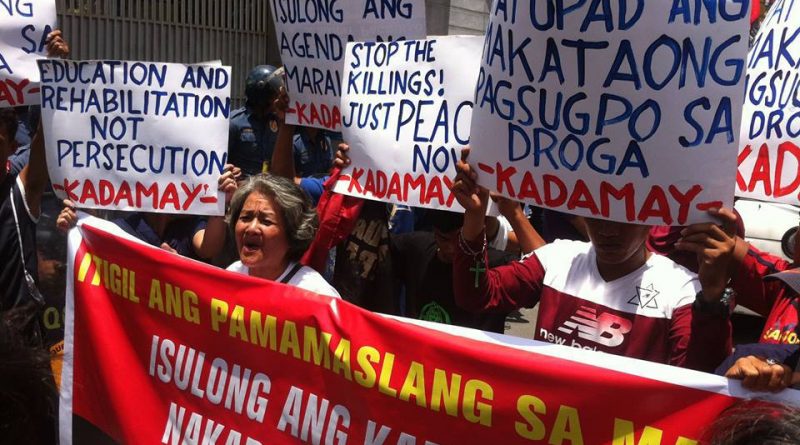 MANILA – President Duterte has received much flak for his strong words and ill-regard for drug suspects, to the point of hitting back at local and international human rights advocates who called him out on the spike in cases of drug-related extrajudicial killings.

“Crime against humanity? In the first place, I’d like to be frank with you: Are they humans? What is your definition of a human being?” Duterte was quoted in a report.

His words may just as well be reflected in the rising statistics of deaths in his anti-drug war. In a GMA Network News report, Philippine National Police Director General Ronald dela Rosa said there were 929 suspected drug users and traffickers killed from July 1 to Aug. 31, plus 1,507 deaths categorized under “mysterious deaths.”

But will government’s shock-and-awe approach be an effective tool to eliminate drugs?

Progressive doctors and studies abroad say that there is an underlying reason to a person’s addiction. To address its causes could lessen, if not eliminate the drug problem.

The correlation of poverty and addiction

Health professionals say drug addicts should be treated as humans who have turned to substance abuse, like alcohol or illegal drugs, as a way of coping with problems.

“When they get drunk or high on illegal drugs, they don’t feel hunger or sadness; they feel happy,” Lesaca told Bulatlat in an interview.

This is an escapist attitude, he added. People who are prone to this are those from the lower and middle classes.

“Someone who makes less than $20,000 annually is about one-third less likely to recover from a cocaine addiction than someone who makes over $70,000,” said the Foundations Recovery Network in an article. The article recognized that homelessness is also a result of substance abuse, but it pointed out that many homeless people “turn to drugs and alcohol to avoid dealing with their feelings and life problems.”

Dr. Magdalena Barcelon, a community physician and coordinator of the Community Health Services Desk of the Community Medicine Development Foundation Inc. (Commed) said drug addiction is a symptom of a life problem.

“Addiction is not a crime,” she said during the National Peer Training for Psychosocial Support held last month.

“There is always a context behind one person’s addiction. What is his problem? Why is drug addiction so widespread in the society? Maybe there is something wrong in society that is why addiction is widespread,” she added.

A bulletin by the World Health Organization notes the peculiarity of the substance abuse problem in developing countries like the Philippines.

Alcohol use is rapidly increasing, with reports of early onset and excessive drinking, as well as alarming increases in cigarette smoking. There are also records of major increases in drug abuse through injections, such as opiate injecting in eastern and south European countries and amphetamine injecting in many regions in South-East Asia.

“Research on social and environmental factors contributing to such increases has been less extensive in the developing world, but indicators and case studies direct attention to urbanization, poverty, migration, technological change, educational deficits, and vested interests in marketing substances,” the WHO bulletin read.

It added, “While substance misuse can contribute to social disintegration, it is also clear that social deprivation invites substance use to alleviate emotional stress, thus perpetuating a vicious circle.”

DualDiagnosis.org said: “Economic status can influence risks toward mental health, which can influence the risk toward substance abuse.”

Lesaca said over the years, many people are getting depressed because of lack of jobs, natural disasters that took the lives of family members, and government policies that make lives of ordinary people difficult, like privatization of health services.

These difficulties, if not managed, cause mental health illness.

HelpGuide.org said in an article that “addiction is most common to people with mental health problems.”

“Alcohol or drugs are often used to self-medicate the symptoms of depression or anxiety,” the article read.

Lesaca said that users are victims of social violence, with pushers and drug lords who promote illegal drugs, without regard for its destructive effects on the users.

“Drug users are victims of drug lords and pushers who abuse users for profit. It’s all about money. That is why there is what they call ‘narcopolitics’,” Lesaca said.

He added that the problem is massive, involving even authorities who confiscate drugs in operations and then later on recycle them for trade. “How can you capture the drug lord if the drug lords are those who should impose the law?”

Dr. Eleanor Jara, executive director of the Council for Health and Development said they are against the violent approach of the Duterte administration in combating drug problem where mostly poor people are targeted by police operations.

Jara urged Duterte to come up with a non-violent approach to combat the drug problem in the country and address the root cause of drug addiction. She also urged the government to target the big drug lords involved in drug trade and not only the small time illegal drug traders.

Jara also cited the revolutionary approach in 1949 when the Maoist revolutionaries quashed opium addiction in China, by organizing people to help rehabilitate addicts. Instead of imposing punishment, they promoted education and support to the people to eliminate illegal drugs and the business that supplies it. It took them only three years to eliminate drug use in China back then.

In Portugal, where the drug problem is also massive like in the Philippines, drug addiction has been decriminalized. Instead of the usual approach of going after users and dealers, the Portugal government has come up with a less violent and more humane policy, after months of studies by Portugal’s special commission composed of doctors, lawyers, psychologists and activists.

Portugal’s reforms have not been limited to treating drug possession as an administrative offense; they also include a wide range of measures, such as prevention and social education, discouraging people from further use of controlled substances, harm reduction, treatment for drug dependent people, and assistance in reintegrating them into society, according to a study by the Open Society Foundation of Portugal’s drug policy.

Lesaca, meanwhile, said that it’s a good thing that thousands of drug users come out in the open with the government’s campaign against drugs. But reports say that some users who surrender only return later to their old habit.

“What is to be done with those who came out as addicts? There should be immediate concrete steps to help them,” he said. Government agencies such as departments of social welfare, health and education, should be involved alongside the police in the anti-drug campaign.

He also said that education is important especially many people do not know the effects of illegal use in their brains.

“It’s a multifaceted, multidisciplinary solution so we should monitor what government will do next,” he added.

Lesaca pointed out that there would surely be less drug users in a society where there are plenty of job opportunities and people are living comfortable lives. But things remain to be seen, he said, as the new administration has been serving for just two months, he said.