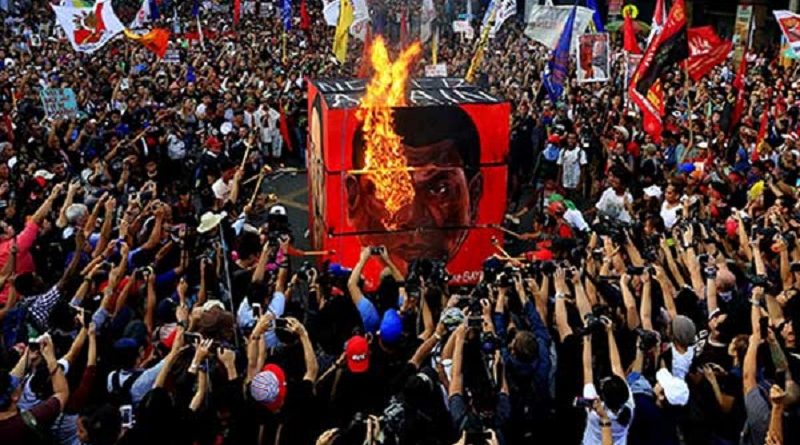 The Communist Party of the Philippines (CPP) acknowledges the advise of Prof. Jose Ma. Sison, Chief Political Consultant of the National Democratic Front of the Philippines (NDFP), that the NDFP can no longer negotiate with the GRP under Duterte. As allied members of the NDFP, the Party and the NPA awaits the convening of the NDFP National Council and the issuance of its decision soon.

“Indeed, it has been starkly clear that peace talks with the GRP under Duterte was going nowhere. Duterte has proved himself a stubborn anti-peace president and warmonger. He showed complete unwillingness to listen to the clamor for substantive socio-economic reforms. He has practically terminated peace negotiations by insisting that talks be held in the Philippines, which the NDFP justly rejects because this violates the Joint Agreement on Safety and Immunity Guarantees (JASIG) which stipulates that talks must be held in a foreign neutral venue. Otherwise, this will only allow the GRP to hold the talks hostage and subject NDFP negotiators to the GRP and AFP’s armed attacks.”

From the start, Duterte did not budge an inch in demanding the NDFP to sign a bilateral ceasefire agreement while not committing himself to basic socio-economic reforms demanded by the people. He is interested only in creating the illusion of peace, not attaining just and lasting peace. Duterte’s concept of peace is acquiescence to oppression and exploitation.

In contrast, the NDFP exercised flexibility in agreeing to a one-week stand-down prior to resumption of talks and to a bilateral ceasefire agreement as part of a package of agreements which include agreements on agrarian reform and rural development and national industrialization and economic development, as well as a general amnesty proclamation.

Duterte, however, will not have any of it. To him, peace talks is merely a tool to subdue and paralyze the people’s armed resistance and not a means to address the issues at the root of the civil war. In the end, he cancelled the scheduled peace negotiations in order not to disrupt the 2018 campaign of intensified military offensives being mounted by the AFP and PNP.

Duterte plans to mount a road show of so-called “peace consultations” which are a mere public spectacle to pretend that he is for peace. In essence, these so-called consultations will be nothing but Duterte and his minions talking to their own shadows, not much different from Duterte’s endless public babbling.

Oplan Kapayapaan is set to fail
Duterte’s Oplan Kapayapaan aim to crush the New People’s Army (NPA) before the end of 2018. He is rushing the recruitment of 15,000 additional troops. Since the start of the year, the AFP launched all-out offensives and total war against civilians and laying siege on civilian communities. He has deployed close to one hundred battalions (with ten new battalions) of combat troops across the country, 75% of which cover the entire Mindanao with around 50% of which deployed against the NPA forces. A mere 25% of AFP battalions cover the rest of the guerrilla zones in Luzon and Visayas.

Duterte’s Oplan Kapayapaan is set to fail. Politically, he is antagonizing the broad masses of peasants and minority peoples as a result of unmitigated killings, illegal arrests and detention, conscription, forcing people to “surrender” and rampant military abuses. He is alienating himself from the rural masses by seeking to convert thousands of hectares of land to commercial plantations and mining sites.

Militarily, Duterte is overstretching his forces (with at least 15-20 troops in every barrio conducting so-called “peace and development” operations) in a futile plan to lay siege on thousands of barrios across the country all at the same time. However, even with all its combat troops, the AFP can cover less than half the total number of barrios within the NPA’s area of operations. Even with the AFP’s all-out offensive, there remains substantial room for NPA units to maneuver, mount tactical offensives, carry out mass work, build the organs of political power, recruit and train more Red fighters and carry out overall strengthening.

Going by reports that the AFP expended around P3 billion in the military’s 5-month Marawi siege, Duterte will likely spend at least P20-30 billion in public money to sustain its self-defeating military offensives against the NPA as well as other Moro armed fighters in the next six months. The AFP is increasingly dependent on the US for its foreign military financing.

AFP and PNP misencounters and encounters are likely to happen repeatedly, not only as a result of miscoordination, but also because of bureaucrat capitalist and criminal rivalries which continue to intensify between military and police officers seeking exclusive control of areas of operations as well as control of local drug trade, gambling operations, bribes and so on.

The Filipino people clamor for an end to the military occupation of rural communities and total war policy of targeting civilians. The local and international community demand respect for human rights and international humanitarian law which the AFP and PNP are trampling on with impunity under Duterte’s orders.

After half a year of all-out offensives, and more than a year of Mindanao martial law, the AFP has failed to cause significant damage to the NPA. The NPA has quickly adapted to the swarm tactics and other tactics of the AFP, applying guerrilla tactics of dispersal, shifting and concentration, quick movements and counter-encirclement to keep the enemy blind and deaf and causing it to waste energy and resources in prolonged operations. The broad masses of peasants and national minorities are rising up against the abuses of the AFP, the PNP and paramilitaries.

The Party’s central leadership and National Operations Command (NOC) have already issued orders and directives to the NPA to frustrate Oplan Kapayapaan. Despite setbacks earlier and in some areas, the NPA can expect to continue its steady national growth this year.

In his drive to accelerate his bureaucrat capitalist plunder and establish his autocratic rule, the tyrant Duterte has trampled upon the broad democratic sectors in the Philippines resulting in its extreme isolation from the people. Everyday, the clamor for his ouster grows loud and reverberates across the country. Amid worsening crisis and fascist oppression, the Filipino people are increasingly determined to push for Duterte’s resignation or removal by any means.

With every exercise of absolute power, he invites hostility and incites more people to resist his heightening autocratic rule and plans to impose nationwide martial law and establish a fascist dictatorship. He has employed the state armed forces and police to unleash widespread violence and repression against the people.

Duterte has antagonized the broad democratic sectors in words and deeds. He has alienated himself from the Filipino people, especially the poor, with his utter disdain for human rights and rampant fascist abuses;

“Duterte is hated by the Filipino people for pulling down the country’s national dignity to the lowest levels amid the saber-rattling of the world military giants in the country’s maritime territory and claimed areas. He has allowed China to build its military facilities and entrench itself in the South China Sea and within the country’s maritime claims. At the same time, he has allowed the US military to strengthen its foothold in the Philippines by building its facilities in Palawan, Pampanga, Tarlac, Cagayan de Oro and others for prepositioning and stockpiling of weapons.”

In less than two years, he has become isolated domestically and internationally. Thus, there is high probability that Duterte will not be able to complete his six-year term of office and will be forced out of Malacañang by way of a surge in anti-fascist protest actions or some other means. Far weaker than the Marcos dictatorship, the US-Duterte regime will likely be ousted in a shorter period of time.

The Party reiterates its call on all revolutionary, progressive and democratic forces to exert all-out effort to further strengthen and expand the broad united front, and bring together all sectors which have suffered under the Duterte regime and rouse the Filipino people in their millions to resist Duterte’s bureaucratic plunder, puppetry and fascism, and overthrow his tyrannical rule.