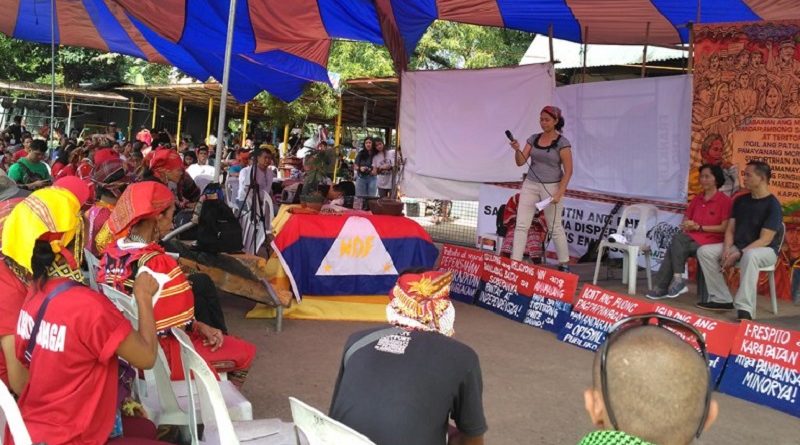 “If the AFP continues to violate the ceasefire, it will not be long and it is highly probable that the NPA would retract its unilateral ceasefire.”

Speaking before members of Sandugo, an alliance of national minorities, at the University of the Philippines Diliman, Oct. 26, NDFP consultant Benito Tiamzon said the AFP is “exploiting the ongoing ceasefire to crush the revolutionary bases of the New People’s Army (NPA).”

Benito said the NDFP received documented reports of “aggressive military operations in the guise of peace and development operations.” These included psywar, intelligence, civil-military and combat operations in several areas. Majority of the violations, he said, came from the regions in Mindanao.

“If the situation gets worse, it would be better to pursue the talks without ceasefire. In the past, the peace talks continued even without a ceasefire,” Benito said. “If the AFP continues to violate the ceasefire, it will not be long and it is highly probable that the NPA would retract its unilateral ceasefire.”

Benito said the AFP’s ceasefire violations are contrary to the spirit of unilateral ceasefire, which aims to foster trust between the two parties and create favorable atmosphere for the advancement of peace talks.

Benito said the call of national minorities to junk the counterinsurgency program Oplan Bayanihan is just. He blamed the Oplan Bayanihan for the militarization and widespread terror in Lumad communities.

During the first and second round of formal talks held in Oslo, Norway, the GRP panel expressed its strong commitment to release all political prisoners.

The GRP panel has pledged to facilitate the first wave of releases of political prisoners this Oct. 27, according to NDFP consultant Wilma Austria Tiamzon.

Wilma said the GRP panel said the series of releases of political prisoners would be done until December this year.

Benito said the filing of common crimes against activists is prohibited by the Hernandez political doctrine and violates the Comprehensive Agreement on Respect for Human Rights and International Humanitarian Law (CARHRIHL).

Benito said that in lieu of rebellion, common crimes, which are based on lies and planted evidence, are filed against activists.

There are more than 400 political prisoners languishing in different jails.

For the Filipino people

Benito said the NDFP participates in the peace talks to address the root causes of the armed conflict.