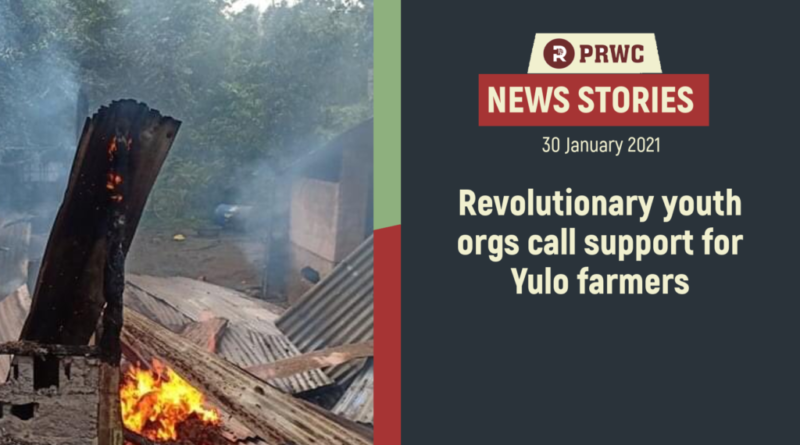 January 30, 2021: Chapters of Kabataang Makabayan (KM) in Southern Tagalog and Laguna have expressed support for residents of Hacienda Yulo in their fight against attempts to drive them away from their land.

“Let us be militant and unite with farmers to drive away Seraph Security, and the Ayala-Yulo collaboration,” says Victoria Madlangbayan of KM-Laguna.

Non-stop attacks and harassment have characterized the opening of 2021 for farmers of Sitio Buntog in Barangay Canlubang, Calamba, Laguna. Goons and agents of the Seraph Security Agency employed by the Ayalas and Yulos have burned down houses, destroyed properties and threatened peasant leaders to pave way for transforming their land into the Nuvali Park, touted as an eco-tourism park.

Nuvali is a collaboration of the Ayalas and Yulos in converting farmlands to residential and ecotourism areas, driving away decade-long farmers and residents of areas it covers.

Sitio Buntog, a 200-hectare parcel of land, is part of the 7,100 hectare Hacienda Yulo, which spans the cities of Calamba, Cabuyao, Santa Rosa, and Biñan in Laguna. Farmers in Buntog along with adjacaent sitios have struggled for the land since 1911.

KM questioned the motto of the Nuvali Park, “Harmony, diversity, and sustainability.” “Harmony” for Ayala Land, Inc. and the Yulo Family in their continued land-grabbing. “Diversity” of tactics in driving away farmers. And “sustainability” for its profits.

Seraph Agency goons have already put up walls in the lower part of Buntog, according to KM-Laguna. Residents’ movements have also been restricted.

“Advancing the agrarian revolution alongside armed struggle, led by the Party, is the genuine way to free farmers of feudal exploitation,” said KM-Southern Tagalog.

Both youth organizations called on students and the Filipino youth to join the New People’s Army as support to farmers’ struggle for land.