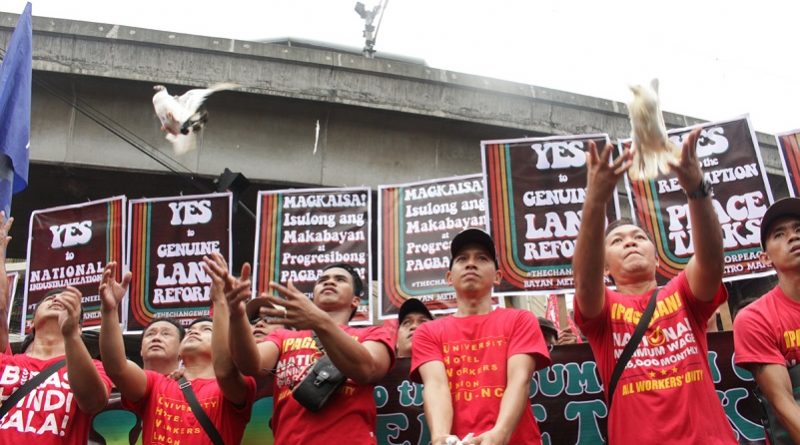 “Workers are jubilant over the positive developments in the GPH-NDFP peace talks. We are hopeful that the efforts of both panels would pave the way in achieving the Filipino workers and people’s aspiration for a just and lasting peace.” KMU chairperson Elmer “Ka Bong” Labog said.

With just four days since the GPH-NDFP peace talks resumed, both negotiating panels have already agreed to draft an agreement on six substantial issues such as the  affirmation of previously signed agreements, reconstitution of the Joint Agreement on Safety and Immunity Guarantees (JASIG) list, acceleration of the peace negotiations, the mode of interim ceasefire, general amnesty for political prisoners, and the convening of the Joint Monitoring Committee of the Comprehensive Agreement on Respect for Human Rights and International Humanitarian Law (CARHRIHL).

The KMU also welcomed both panels’ effort to complete the work on the Comprehensive Agreement on Socio-Economic Reforms (CASER) within six months.

“We welcome the GPH and NDFP’s commitment to forge an agreement on socio-economic reforms within six months. These reforms, particularly the genuine agrarian reform and national industrialization, would address the worsening poverty among workers and peasants which is the root of armed conflict in the country” Labog said.

Labog also urged the GPH and the NDFP to fast-track the work on addressing particular workers’ demands such as the junking of contractualization, implementation of a national minimum wage and respect for workers’ rights and welfare.

“We are also hopeful that the peace talks would address the most pressing issues and demands of Filipino workers. The lack of regular jobs, poverty wages, and gross violations of workers’ rights has resulted in social unrest in the country,” said Labog.

The labor center meanwhile demanded the House of Representatives to immediately act on passing a General Amnesty Law that would free the more than 500 political prisoners, among which are unionists and labor rights advocates.

“The release of all political prisoners is crucial in attaining peace that is based on justice. To prolong their incarceration is to deny them justice. The more than 500 unionists, labor rights advocates, farmers and social activists have been illegally and unjustly detained for standing-up of for workers’ and people’s rights and aspirations for genuine freedom, justice and change” Labog said.