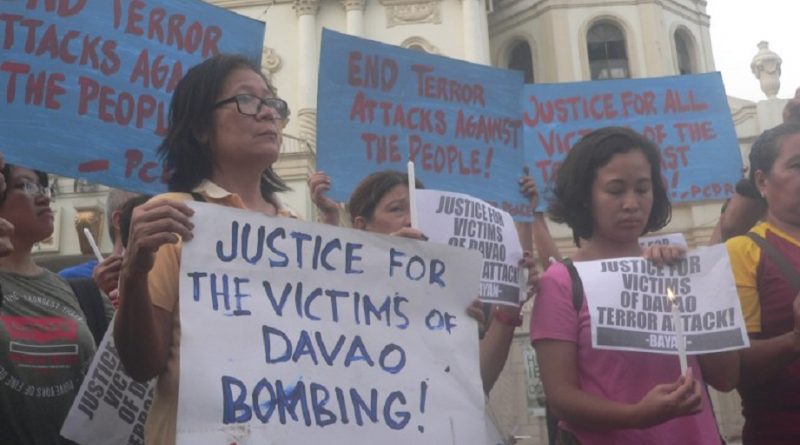 “It is no secret that the ASG has been created, funded, trained and operated by the US CIA and the AFP.”

MANILA – Progressive groups gathered to light candles at Plaza Miranda beside Quiapo church here Sept. 3 to mourn with victims of the bombing in Davao City that killed 15 and wounded at least 60 others on Sept. 2.

Metro Manila-based groups led by Bagong Alyansang Makabayan (Bayan) condemned the bombing, which, they said, was perpetrated by sectors who wish to sabotage government peace efforts with revolutionary groups. It is reminiscent of what happened during the Arroyo administration when terror attacks apparently justified the declaration by the US of the Philippines as the “Second front” of its War on Terror.

The Abu Sayyaff Group (ASG) initially owned up to the Davao blast, but an Inquirer report said an ASG leader later attributed it to an allied group, Daulat Ul Islamiya. The attack is suspected to be aimed to distract the heavy concentration of government troops and offensive operations in the bandit group’s lair in Sulu. The ASG reportedly numbers only some 200 and holds 23 hostages, both Filipinos and foreigners.

Amira Lidasan, national spokesperson of Suara Bangsamoro, condemned the Davao attack: “This is not Islamic. We are not murderers, and we do not waste life, as only Allah can decide when to end a life.”

Lidasan, however, expressed wariness on the “state of lawlessness” which President Duterte declared shortly after the attack.

“We are worried that this may lead to another crackdown on our Muslim brothers and communities, who will be arrested as fall guys and presented as perpetrators…We hope that we will not become casualties of this state of lawlessness, to be arrested and paraded as ‘terrorists,’ just to show false justice,” Lidasan said.

In 2001, following US President George W. Bush’s declaration of War on Terror, President Gloria Arroyo declared a “state of lawnessness” in Basilan, which led to the arrests of hundreds of innocent Moro civilians, many of whom remain in detention in Taguig City.

“We want to remind Duterte that we were one with him in condemning the Sasa wharf bombing in 2003, which an investigation exposed to be the handiwork of those who want to spoil the peace talks between the government and the Moro Islamic Liberation Front,” said Lidasan.

Renato Reyes, Bayan secretary general called on President Duterte to clarify the “nature, extent and duration” of the state of lawlessness.

“While the President has said that it is not martial law, it is important that the legal parameters are defined and the public informed. Is the state of lawlessness being declared nationwide and not just in the affected region? Will AFP checkpoints be set up in cities as well? It should also be clarified why the war on drugs is now included in the declaration that was first triggered by the Davao blast,” said Reyes in a statement.

’ASG is a CIA creation’

The Kilusang Mayo Uno (KMU) said the bombing may just as well be the handiwork of the US government and the military, which were exposed to have masterminded the bomb attacks during the Arroyo regime.

“We have every reason to believe that the Davao bombing was an act of terror orchestrated by the US government and their lapdogs in the Armed Forces of the Philippines (AFP), using their long time terrorist bogey Abu Sayyaf Group to create havoc and unrest in the country to justify the increased deployment and presence of US troops in the country especially in Mindanao,” said Elmer Labog, KMU chairman in a statement.

“It is no secret that the ASG has been created, funded, trained and operated by the US’ Central Intelligence Agency (CIA) and the AFP to justify US intervention and violations of our sovereignty under the guise of the war on terror,” Labog said.

In 2004, the independent Mindanao Truth Commission investigated a series of 33 bombing incidents which rocked Mindanao, killing 95 and wounding 490 others from 2001 to 2004. The body cited how junior military officers who led the “Oakwood mutiny” exposed “Oplan Greenbase,” an alleged plan by the Department of National Defense to attack Christian-dominated public areas and cause destabilization. The attacks justified the increased presence of US troops in Moro areas, as well as the acquisition of “anti-terror” aid from the US.

In 2002, a suspected CIA agent, American Michael Terence Meiring was almost killed when a bomb he was tinkering with exploded in his room in Evergreen Hotel in Davao city. Before the police could arrest and interrogate Meiring, who was taken to a hospital, he was reportedly spirited out of the country by US Federal Bureau of Investigation agents. The incident fueled suspicions of the US role in the terror attacks.

Duterte, then Davao City mayor, was reported to have been incensed at the US by the incident. Now President, Duterte recently criticized the US government for its intervention in other governments, and “importing terrorism.”

Labog said it will be a good time for Duterte to revoke onerous agreements with the US, such as the Enhanced Defense Cooperation Agreement (Edca), the Visiting Forces Agreement (VFA), the Mutual Defense treaty (MDT) and the Mutual Logistics and Support Agreement (MLSA) “that gave license to the US to meddle into our internal affairs and commit such heinous acts of violence and terror against the Filipino people.”

“We demand that President Duterte stand with the Filipino people against these US orchestrated acts of terror,” he said.

Labog also called on the public to be watchful and critical in the coming days.

“We also call on the Filipino people to be vigilant as the Davao blast incident might be used by undemocratic elements to foment more chaos and sabotage the peace initiatives of the Duterte administration and the revolutionary groups,” said Labog of KMU.

Incidentally, Plaza Miranda, the venue for the gathering, was also the site of the 1971 bombing of the Liberal Party miting de avance, which President Ferdinand Marcos readily blamed on Senator Benigno Aquino Jr. and communists leaders, and was one of his basis for declaring martial law in 1972.