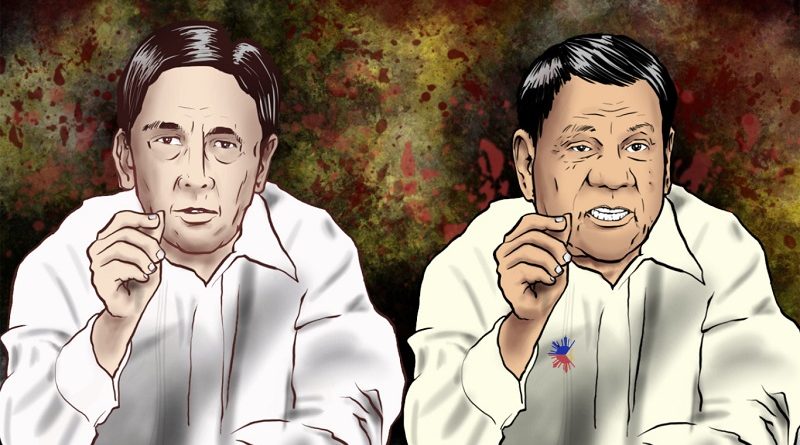 The civil-democratic rights of the people across Mindanao are being curtailed as they are subjected to checkpoints, warrantless arrests, curfews and other restrictions. The Party calls on the entire Filipino people to fight the imposition of martial law in Mindanao and demand its immediate lifting.

The martial law imposition, was made on the narrow pretext of armed clashes in Marawi City between the AFP and the so-called Maute Group, a bandit group whose leaders have known links with military officials. In the vain hope of justifying the martial law declaration, the fascists are turning Marawi City into a wasteland in the same way that parts of Zamboanga City was razed to the ground in 2013 by the AFP with aerial bombardments and heavy gunfire.

Duterte’s martial law declaration in Mindanao has gone beyond Marawi. It has a much wider target and purpose.

He has declared that he will be as “as harsh” as Marcos, foreboding the worst kinds of human rights violations and fascist attacks against the people. In doing so, Duterte has practically ordered the AFP soldiers to impose its rule and carry out more abuses with extreme impunity. The Filipino people will hold him directly responsible for all the abuses perpetrated by the military and police under his martial rule.

With martial law imposed in Mindanao, the reactionaries will surely be more barefaced in employing military and police forces to suppress the struggles of workers and peasants and other sectors for genuine land reform, higher wages, better living conditions as well as environmental protection against foreign mining operations. With martial law in Mindanao, Duterte has imposed himself as a military ruler ready to ram through the bureaucracy and trample on civilian processes.

With martial law, Duterte has further emboldened the AFP to intensify its campaign of extrajudicial killings, abductions, torture, indiscriminate firing, military occupation of communities, forcible evacuation and hamletting of communities, aerial bombings and a myriad forms of military abuses. In the past few months, his army has committed countless abuses against the people, placing entire communities under military rule in waging its counter-revolutionary Oplan Kapayapaan.

Duterte has declared martial law in Mindanao in the face of persistent contradictions among the ruling classes, threats of coups and other machinations. By doing so, he is asserting his role as commander-in-chief in the hope that he can ingratiate himself with the military echelon and preempt plans of certain military officials from undertaking a coup d’etat. Along the same objectives, he has also appointed an increasing number of military officials in his cabinet and other government agencies. The handful of progressives in his government have become ever more marginalized and threatened.

He is further entrenching himself in power and is ever determined to use the influence of hundred billion dollars of infrastructure projects to secure the support and loyalty of the ruling class elite. He aims to employ his dominant majority control of congress to get support for his martial law declaration and give him the authority to extend it to a full 60 days or more. With Marcos-like authoritarian powers, he can push for the implementation of large infrastructure projects beyond public scrutiny.

If Duterte succeeds in securing congressional support for martial law in Mindanao, he will surely be emboldened to impose martial law on the entire country. He can easily come up with more pretexts such as “fighting criminality” and so on.

The imposition of martial law in Mindanao is part actualization of Duterte’s declared plans to establish himself as a strongman. His resort to such draconian measures, however, are evidence of the increasingly weak and fractious ruling state and the worsening crisis of the entire ruling system.

The CPP calls on the Filipino people to vigorously oppose Duterte’s martial law declaration in Mindanao and demand its immediate lifting. They must unite all forces to oppose military rule in Mindanao and resist plans to impose all-out authoritarian rule in the country. They must carry out and intensify protest mass actions nationwide, banner the demand to end martial law, assert civilian rule and respect for civil and political rights as well highlight the basic demands of the workers and peasants and other democratic sectors.

The imposition of martial law and the worsening human rights abuses that will come out of it will surely be brought forward in peace negotiations as violations of the Comprehensive Agreement on Respect for Human Rights and International Humanitarian Law (CARHRIHL).

In the face of the Duterte regime’s martial law declaration in Mindanao, the necessity of waging revolutionary armed struggle becomes ever clearer. Thus, the New People’s Army (NPA) must be ready to accelerate the recruitment of new Red fighters as Duterte’s martial law convinces more and more people to take up arms against the rotten system. The Party calls on the NPA to plan and carry out more tactical offensives across Mindanao and the entire archiepelago.

As proven under Marcos, waging revolutionary armed resistance is the most effective way of resisting martial law, defending the people’s democratic rights and inspiring them to wage ever greater struggles.

Communist Party of the Philippines
24 May 2017