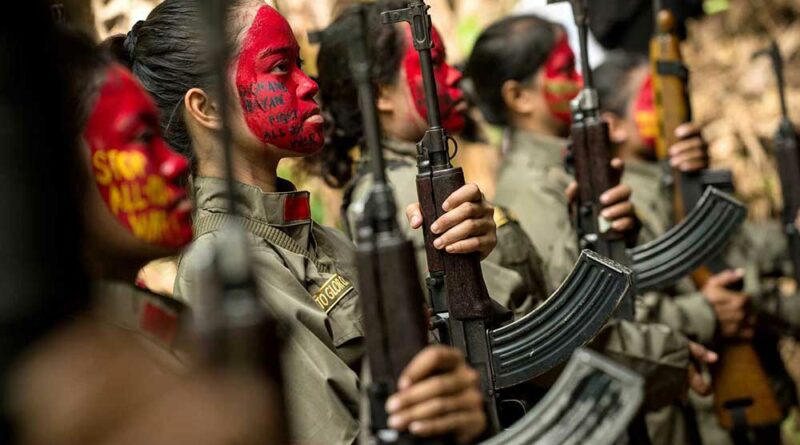 Red fighters bombarded the helicopter as it landed to lower SOLCOM officials. As the NPA fired at the said helicopter, it immediately fled. The NPA unit, which conducted the operation, safely retreated.

It took place on the exact day scheduled for a visit by General Antonio Parlade Jr. in sitio Mantay to deal with fake surrenderees, inaugurate fake community projects and once again announce that the CPP-NPA-NDF is declining in Mindoro and across the country.

As a result of this tactical offensive, the arrogant General Parlade, along with high-ranking officials of the NTF-ELCAC and the Provincial Task Force -ELCAC led by Governor Ed Gadiano, hurried home on his way while his troops were heavily guarded. landed a newly purchased S70i BlackHawk helicopter.Fascist military officials and Local Government Unit (LGU) officials simply walked home instead of using a helicopter again.

The successful operation of the LDGC-NPA-Mindoro is proof of the hatred of the Mindoreño people for the ongoing human rights abuses of the 203rd Brigade. It will be recalled that the 203rd Brigade used helicopters several times to bomb, indiscriminately shoot and intimidate Indigenous Mangyans in the towns of Victoria, Socorro, Bongabong, Roxas, Mansalay of Oriental Mindoro; Magsaysay, San Jose, Calintaan, Rizal and Sablayan of Occidental Mindoro in 2020.

It serves as a message against the lies spread by the executioner and the arrogant General Parlade. In 2017, the said general proudly declared that he would end the CPP-NPA-NDFP in Mindoro within two years. In the struggle to achieve this crazy plan, he did not simply torture the Mindoreños while he was the commander of the 203rd Brigade-Phil Army on the island from 2015 to 2018.

During Parlade as commander of the 203rd Brigade intensified bombardment, bombing and strafing of communities and farms of farmers and indigenous Mangyans. He blocked the flow of food [food blockade] in the communities wherever there was an encounter between the AFP-PNP forces and the NPAs even if the people were hungry here.

Mindoreños will never forget Parlade’s blockade of food despite the devastating measles epidemic in communities that has resulted in the deaths of hundreds of children and youth. His executioners occupied public facilities in communities that violated the law of war and CARHRIHL (Comprehensive Agreement on Respect for Human Rights and International Humanitarian Law).

It seems that martial law has been used to control the residents of the communities. Their stupid policy includes banning farmers and indigenous people from coming to Kaingin because they are allegedly feeding the NPA. Smoking in the kaingin was also banned as the masses suspected that the NPA was cooking there. In the mountains, they have made several cases of arson in the homes of the people suspected by the military to continue with the NPAs. The illegal investigation along with the mental and physical torture of the indigenous leaders and all their suspicions related to the revolutionary movement has become commonplace among the troops held by Parlade.

Parlade and the 203rd Brigade are responsible to the Mindoreños for the thousands who were raped, forced to surrender, illegally interrogated, tortured, forced to flee and killed. This is the true face of Duterte’s mercenary soldiers who pretend to be kind under the leadership of fascist and arrogant Parlade.

The LDGC will not stop fulfilling its sacred duty to defend the national and democratic interests of the Filipino people. With the help of the people, it will carry out tactical offensives to grant revolutionary justice to the main corporals and perpetrators of crimes against the people.

The Mindoreños revolutionaries will do everything to clear the way for the overthrow of the US-Duterte dictator and terrorist regime!