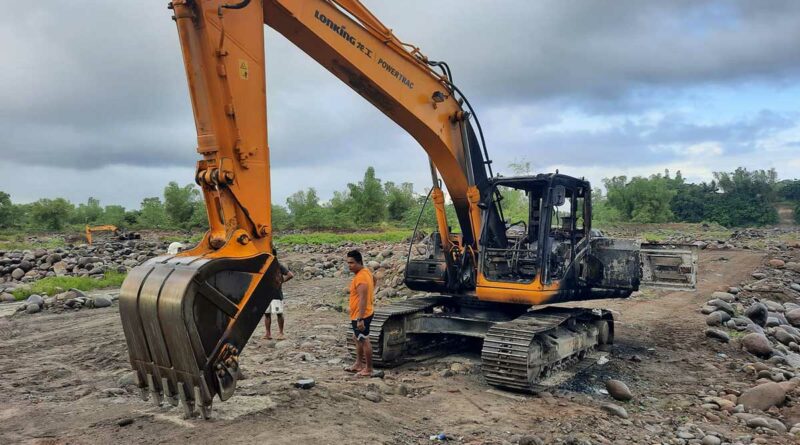 The sanction was carried out by the RJPC yesterday, April 12, 2021 at around 10:00 pm, and paralyzed 3 backhoes on the Malogo river quarry site.

Golez has made use of his influence as local executive to violate even the incredulously low standards set by the reactionary government regarding environmental compliance. Golez and his business partners, which include prominent landlords, local businessmen, and corrupt police officers, are notorious for hauling earth and rocks from the riverbed and even from upland areas near the river, and then dumping waste water and material on the river itself.

These iniquitous practices gave other quarry operators the go signal to abuse the environment. There are hundreds of quarry operators in the 3rd District of Negros Occidental alone and around a thousand more have pending applications. The handful who hold legitimate permits violate the reactionary government’s flimsy regulations with impunity.

Malogo is a major tributary which runs through several haciendas and agricultural areas in Silay City, EB Magalona town and in Victorias City, where the Malogo river connects to the Guimaras strait.

On the very first day of the new year 2021, thousands of families were evacuated in several barangays in Victorias City due to heavy flooding. Around 70,000 more were affected and evacuated in EB Magalona town, Silay, Talisay, Sagay and Cadiz cities, where torrential rains and flooding caused destruction to the lives and livelihood of residents and small farmers. Flashfloods were also experienced in Escalante and San Carlos cities.

Non-stop quarrying operations and so-called development projects in the Malogo river, other major tributaries such as the Sicaba, Himogaan, and Danao rivers, and other minor streams in North Negros have caused much damage to the environment. The destruction brought about by the excavation of rocks, gravel and sand from these rivers has altered the natural terrain and made the area vulnerable to natural calamities and the inundation of residential areas and farmlands.

This mad demand for cheap construction materials is driven by no less than the Duterte regime’s corrupt and mindless “Build, Build, Build” program, which plunders both natural resources and the public coffers while plunging the nation heavy in debt to foreign entities like China.

Meanwhile, the state’s armed forces have made themselves busy with non-stop combat operations targeting hacienda workers, peasant organizations and unarmed activists and civilians even in this time of flooding and disaster. A farmworkers community in Talisay City was raided by the 79th IB, while another peasant leader was gunned down by paramilitary hitmen in Escalante City last January.

This goes to show that suppressing dissent and cracking down on the people’s democratic rights are truly the top priorities of the mad dog Duterte and his military cabal. Billions of people’s taxes are squandered on militarization and red-tagging, while people are left to fend for themselves in emergency situations.

The NPA and the people’s democratic government is keen in sanctioning Golez, and warning all other entities who ravage the environment and cause harm to the people. As sincere people’s warriors, the NPA in Northern Negros is committed to defend the masses from the true terrorists and criminals who continue to mount fascist attacks against the people amid disaster situations and the COVID-19 public health emergency. These savage mercenaries and bureaucrats are from the same ruling class which wreaked economic and environmental destruction throughout the country through decades of exploitation and plunder.

The people continue to clamor for a free and just society, and they know that this can only be achieved through people’s war. The people will rise up and fight. The dirty counter-revolutionary war of the fascist US-Duterte regime is bound to bitter frustration and dismal failure.