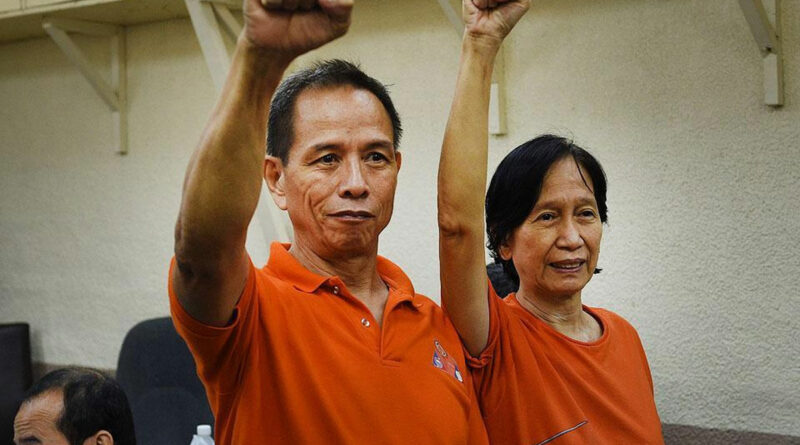 The Negotiating Panel of the National Democratic Front of the Philippines (NDFP) protests the recent conviction of Benito Tiamzon and Wilma Austria of “kidnapping with serious illegal detention” by a court of the Government of the Republic of the Philippines on fundamental factual, legal and political grounds.

While we leave it to their defense lawyers to traverse the factual and legal justification of the GRP court and undertake the necessary legal remedies that they may avail of under the circumstances, there are outstanding points that militate against this decision.

Foremost among these is the credibility of the lone testimony of the prosecution witness (then Philippine Army Lt. and now retired Brigadier General Abraham Claro Casis) who, with unbelievable magical throwback powers, can vividly remember minute details, names, faces, places and events that happened in 1988 or a good three decades ago in a case long archived and dismissed against many other accused but just recently politically excavated by the militarist hawks of the Duterte regime.

Another is the sweeping and conclusory inferences of conspiracy by mere alleged presence. Still another is the preconceived out-of-court autosuggestion on identification of the Tiamzons who were already then in custody at the time of trial and prominently exposed in public.

Still another is the effective denial of due process by their involuntary inability to personally present their own defense due to the real and imminent threat on their lives conducted under the baton of no less the GRP Principal, President Rodrigo Duterte.

More fundamentally, the charge, even on the basis of the alleged facts, is erroneous because it is in violation of the time-honored doctrine universally recognized and even laid down in the GRP’s own People v. Hernandez 1956 ruling as acknowledged further in the binding 1998 GRP-NDFP Comprehensive Agreement on Respect for Human Rights and International Humanitarian Law (CARHRIHL). This doctrine mandates that all alleged acts in pursuit of one’s political beliefs are absorbed, subsumed or integrated in one political crime of rebellion and cannot be mutated into several common crimes as what they were convicted of.

Besides, assuming the facts to be true as alleged and supposedly proven during the trial, the act of taking into custody by one belligerent force under a responsible political authority to an armed conflict of armed combatants of the other party is legitimate in the laws of war.

Thus, they are either “persons deprived of their liberty for reasons related to the armed conflict” or “prisoners of war” in accordance with international humanitarian law, particularly the 1949 Geneva Conventions and their 1977 Protocols and as bilaterally acknowledged in the CARHRIHL.

This in fact put into applicability the protections of the laws of armed conflict, including humane treatment, of which extant records show is consistently abided by the New People’s Army and the Communist Party of the Philippines to persons in such a situation and circumstance.

Considering that Benny and Wilma are both publicly-known political consultants of the NDFP, they are moreover entitled to the protection of the subsisting 1995 GRP-NDFP Joint Agreement on Safety and Immunity Guarantees (JASIG) which remains effective and demandable despite its questionable termination by the GRP and regardless of the status of the GRP-NDFP peace negotiations. And this is precisely the raison d’ etre for it, i.e. to encourage participation by ensuring subsequent protection.

Furthermore, the spouses Tiamzon and Austria are active and key participants in the peace process, with Benny as member of the NDFP Panel while Wilma as Chair of the NDFP Reciprocal Working Committee on the fourth and last substantive agenda in the peace negotiations, the End of Hostilities and Disposition of Forces.

Viewed then in the context of the extrajudicial killings of NDFP political consultants Randy Malayao, Julius Giron and Randall Echanis; the illegal arrests and filing of false or contrived non-bailable criminal cases against several other still detained NDFP political consultants like Vicente Ladlad, Rey Casambre, Adelberto Silva, Ferdinand Castillo, Frank Fernandez, Renante Gamara, Esterlita Suaybaguio and their alleged staff and companions; tied up with the false misrepresentation that the CPP and NPA are designated as terrorists in the pertinent UN Security Council in addition to the continuing listing by the US, European Union and New Zealand and by the GRP Executive Branch itself; and the obvious plan to proscribe the CPP-NPA and even NDFP under the 2020 GRP so-called Anti-Terrorism Law, this latest persecutory conviction of the Tiamzons not only mocks all the foregoing principles, standards and agreements but also tightens the monkey wrench on the resolution of the ongoing armed conflict rooted on very real issues that gave it birth and continues to flourish notwithstanding the futile attempts to bamboozle the revolutionary forces into unprincipled submission and unacceptable capitulation.

The baseless and persecutory conviction of Benny Tiamzon and Wilma Austria is against the principles and the democratic rights guaranteed by any liberal-democratic constitution and international law on human rights and humaniarian conduct; and runs counter to the demands of the Filipino people and the peace advocates for the tyrannical Duterte regime to reverse its current course of state terrorism and fascism; and to remove all roadblocks to serious peace negotiations.

The regime’s policy to terrorize the people by invoking anticommunism and terrorism and by redtagging and arbitrary listing of target organizations and personalities , arresting and detaining people without judicial warrant, confiscating bank accounts and properties, torturing and killing people extrajudicially is bound to fail as during the time of the Marcos fascist dictatorship and would certainly incite more people to take the road of armed revolution.