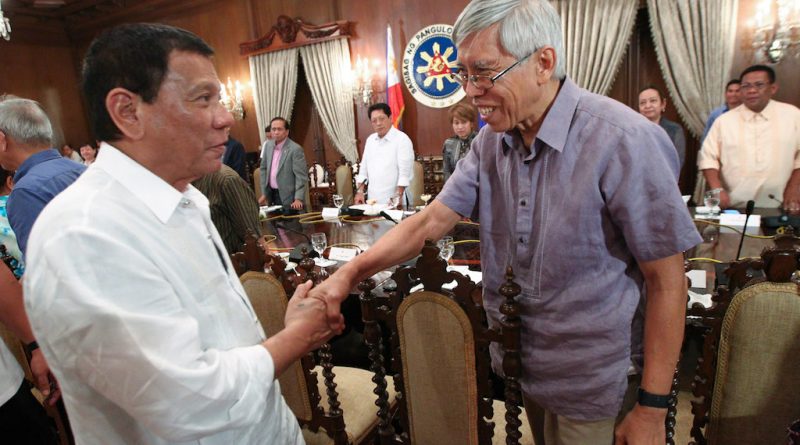 MANILA – A peace consultant of the National Democratic Front of the Philippines (NDFP) denounced the hurried burial of ousted dictator Ferdinand Marcos Sr. on Nov. 18, saying it has put “a crack” on the ongoing GRP-NDFP peace process.

Iyung pandaraya na ginawa, na ginamit ‘yung kapangyarihan, isa itong malaking question mark. Kaya kahit papano, ano ito, me lamat na ‘yung relasyon (The deception that they did, using [political] power, puts a big question mark. This somehow puts a crack on the relations),” said NDFP consultant Alan Jazmines, at the assembly of the Campaign Against the Return of the Marcoses to Malacañang (Carmma) held in the University of the Philippines Diliman on Nov. 19.

“This proves how they wish to erase history and the judgement on a dictator and enemy of the people, who is now considered a hero,” he said. The rehabilitation of the Marcoses as signalled by the burial may also lead to a repeat of the dark days of martial law, Jimenez said, adding that the people must act to stop similar actions in the future.

“It showed that they (Marcoses) are still there, entrenched, and not gone from society, but even connected with those in power,” Jazmines said. He cited how a helicopter of the Armed Forces of the Philippines was used to fly in the dictator’s remains, and also his family, from Ilocos Norte to LNMB, in a hurried, private ceremony.

Jazmines said this move by the government and the Marcoses also violates the Comprehensive Agreement on the Respect for Human Rights and International Humanitarian Law (Carhrihl), which aims to guarantee the human rights of the people, and give justice to victims of violations, which numbered by hundreds of thousands under the Marcos dictatorship. Carhrihl was signed by government and the NDFP in 1998.

“This is like a slap on Carhrihl…a slap on human rights,” he said.

Article 5, Part 3 of the Carhrihl states that both parties “respect and support the victims of human rights violations during the Marcos regime,” and takes into consideration the decisions by various courts on the complaints they filed against Marcos, including that made by the US Federal Court System, the Swiss Supreme Court in 1997 and the Philippine Senate Resolution 1640.

Article 7, also of Part 3, states that government “will work for the immediate repeal of any subsisting repressive laws, decrees and other executive issuances,” including those issued by Marcos. A few of such order include: Batas Pambansa 880, which restricts peaceful public assemblies; General Order 66 and 67, which allows checkpoints and warrantless searches, Presidential Decree (PD) 1866, which allows filing of illegal possession of firearms charges with regard to political offenses, PD 129, which authorizes demolition of urban poor communities; and Executive Order 272, which allows lengthened period of detention.

The Marcoses hastily buried their patriarch at the Libingan ng mga Bayani (Heroes’ Cemetery) on Nov. 18, just 10 days after the Supreme Court junked seven petitions to stop the burial. The high court voted 9-5 allowing the Marcos burial, echoing President Duterte’s statement that the ousted dictator was not convicted for any crime in the country and no law exists banning his burial.

“It cannot be avoided that the peace talks will be affected, because this is a serious violation and we must discuss this. We must put a stop to the evil designs of the Marcoses and worse violations that may be committed in the future,” Jazmines said.