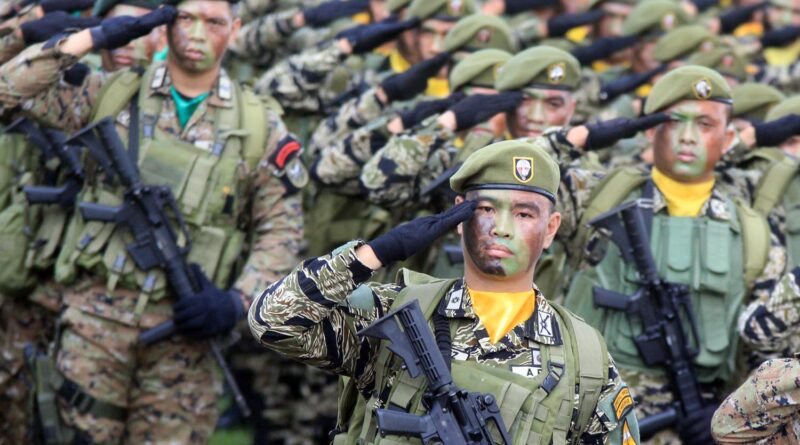 The factional divide in the reactionary Armed Forces of the Philippines (AFP) will likely widen and shake its various levels of commands including the 3ID here in Western Visayas as Duterte’s sell out of the West Philippine Sea (WPS) and obsequiousness to imperialist China becoming more conspicuous every passing day, NDF-Negros said a statement today.

Ka Bayani Obrero, NDF-Negros spokesperson, said that despite of its projected image of a unified army, the AFP is a deeply divided organization with intertwining conflicting interest and stance. There are at least three major factions in the AFP – the pro-Duterte diehard loyalists, the pro-China collaborators and pro-US hard-core officers.

“Aside from these, there is now a growing patriotic ferment among disgruntled officers and soldiers disgusted by their commander-in-chief’s countless acts of treason and monstrous crimes against the people like wholesale butchery of unarmed civilians in counter-insurgency operations using them as cannon fodder. Not to mention the unbridled corruption of his favored generals enjoying a privilege comfort away from the battlefield at the expense of ordinary foot soldiers,” Ka Bayani said.

Ka Bayani further said that in the history of people’s national democratic struggle scores of AFP officers and soldiers imbibed with nationalist sentiments took the people’s side and courageously fought alongside with them like Lt. Crispin Tagamolila.

“He was an Ilonggo Philippine Military Academy (PMA) alumnus who joined the New People’s Army (NPA) to fight the Marcos fascist dictatorship and was martyred in an armed clash against his onetime compatriots in the fascist military. The contemporary clandestine patriotic movement inside the AFP was thus named after him,” according to Ka Bayani.

In Negros, the most prominent was the defection of Gen. Raymundo Jarque to the revolutionary movement in 1995.

“Gen. Jarque, despite a striking AFP career record, was himself a victim of injustice. He was charged with trumped-up case so common nowadays by a warlord-politician he embroiled on several issues. The system he loyally served for years could not even afford him his basic rights and the protection from such malicious prosecution. His unprecedented act of defection inspired others to abandon the reactionary and mercenary military service, like the team of paramilitary soldiers who defected to the NPA afterwards, bringing with them their high-powered weapons,” Ka Bayani said.

The NPvA or the Negros Paramilitary veterans Association, was an organization of AFP miliatiamen, who became active in street protests in the late ’90s to demand fair remuneration and benefits as well as in advocating other legitimate people’s issues, Ka Bayani added.

Recently, a group inside the AFP composed of retired and current high command officers called VIBER 300 issued a statement demanding that Duterte must denounce China and assert the legal claims of the country in the WPS or they will withdraw their official support to him as their commander in chief.

“Duterte, as an obstinate imperialist flunkey, cannot be expected to strongly assert and fully maximize the 2016 UNCLOS ruling as can be gleaned from recent developments. Thus, we urge the concerned military officers to sustain their efforts in expanding their ranks clandestinely, and in linking these to the broad people’s movement against Duterte’s tyranny and China’s aggressive inroads in the WPS”, Ka Bayani added.

NDF-Negros expressed willingness to unite and cooperate with all military officers and soldiers who endeavor to help oust the fascist chieftain Duterte and oppose imperialist annexation of the WPS.

Through their families and friends based in the countryside, may we assure them of our continued support to their pro-people sentiments and patriotic aspirations vis-a-vis Duterte’s extreme brutality against the people and puppetry to imperialist interests, Ka Bayani concluded.