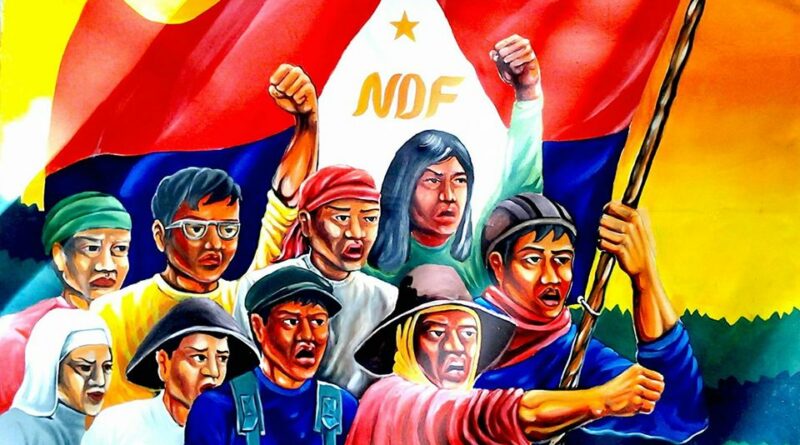 On the occasion of the 48th founding anniversary of the National Democratic Front of the Philippines, the NDF in Southern Mindanao congratulates all Communist Party cadres, Red commanders and fighters of the NPA, mass activists from different revolutionary organizations and allies from the middle and national bourgeoisie whose individual commitment and collective unity made the Filipino people’s revolutionary united front not only a force to be reckoned with but one that has stood strong and grown in strength in close to five decades of struggle, facing and overcoming fascist campaigns of counter-revolution.

The tyrannical and fascist rule of Rodrigo Duterte temporarily sitting at the helm of the semi-colonial and semi-feudal system will be no match to the Filipino people’s collective wrath, and will sure to make his regime pay for its numerous crimes and blood debts one way or another and in more ways than one.

Revolutionary forces in the region likewise remember and honor the stellar life and times of NDF-Mindanao spokesperson Alvin “Ka Joaquin Jacinto” Luque, who took revolutionary root in Southern Mindanao before becoming one of national democratic movement’s esteemed public figures. His murder in the hands of Duterte’s fascist AFP thugs on December 10, 2020 in Tandag City, Surigao Sur is one crime that our revolutionary justice will surely make the fascist Duterte regime pay for.

After nearly 5 years in power, the Duterte regime now only has the veneer of authority, whose power is buoyed merely by the sycophancy of paid hacks and a rabid troll army, and the sheen of strength arising from the volatile loyalty of the reactionary state’s armed forces, which Duterte himself is desperately and constantly trying to buy off. He learned nothing at all from the fall of his strongman idol Ferdinand Marcos, as he forgets that it is US imperialism, and not him, that wields ultimate control over the AFP and the PNP.

The bellicose Duterte regime is hell-bent in making enemies of the people and their democratic interests, even well-intentioned individuals and their community pantries. He froths at the mouth when speaking against women, peasants, workers, youths, the religious and the Lumad, but slinks into obsequious double-speak when dealing with the militarist intrusion and thuggish thievery of imperialist China.

Duterte created and unleashed the monster called National Task Force to End Local Communist Armed Conflict (NTF-ELCAC) under the operational control of the AFP in order to stem the growing strength of the revolutionary movement and remain in power or at least eventually evade prosecution for his myriad of crimes.

To ensure the first, Duterte tries to maintain military and police loyalty through humongous budget for general’s pork barrel and increased spending for sustained combat operations with costly second-hand war materiel and military technology to wreak havoc on civilian communities and clamp down on dissent. All the deadly bells and whistles under the regime’s counterinsurgency program, like red-tagging, harassments and political persecution, forced and fake surrenderees, aerial and artillery bombardments, or mercenary bounties for killed or captured “communist terrorists,” are more for the complete subjugation of the masses, whom Duterte and the AFP have always made clear were “the pond that needed to be dried out.”

To help accomplish the second, which is to remain in power or evade prosecution, Duterte railroaded the release of NTF-ELCAC’s massive P19 billion a year before the next presidential election in vain hope of ensuring patronage politics will yet again do wonders for the presidential ambitions of his equally-fascist daughter Sara Duterte or any one of his lackeys. Nevertheless, Duterte will leave, if ever he survives not being forced out of, Malacañang with nothing but a legacy of fascist impunity, a disastrous and militarist response to a pandemic, and a sovereignty sold out to imperialist powers.

The Lumad and peasant masses in the rural areas of Southern Mindanao suffered immeasurably during last year’s onset of the Covid-19 pandemic, with lockdowns and restrictions reaching peak in the first half of the year during their traditional planting season when they were usually assured of better harvests.

In many areas in the region, hundreds of thousands of peasant and Lumad families saw their already miserable incomes plummet to penurious levels when local traders arbitrarily stopped buying corn, vegetables, sweet potatoes, copra, abaca and others as a result of the Duterte regime’s ill-prepared and thoughtless lockdowns.

Semi-feudal exploitation worsened as modern landlords, or landowners who are merchants and usurers besides, forced peasants into extreme arrangements such as paying lower prices for their products on installment and over an extended period of time. When the lockdowns loosened, peasants who scrambled to dispose of their stocked products were compelled to sell for little to zero profit, while others even at a deficit.

Agricultural workers in plantations were abruptly denied their only means of income as large and foreign agri-companies closed shop to protect their investments. The overly-hyped subsidy under the corruption-laden social amelioration program remained a myth to many poor peasant and agri-worker families in the region. Without substantial government food subsidy and zero production support, they had to rely on each other for support and made do with sub-standard living conditions in order to survive.

Meanwhile, urban poor residents, especially in Davao City, fell victims to widespread dislocation while jeepney and PUV drivers and operators suffered loss of source of income as Davao City Mayor Sara Duterte remained adamant in forcing Build, Build, Build infrastructure projects and transport modernization. Hundreds of families in the city, having lost their homes and possessions in suspicious “fire accidents” or brutal demolitions by PNP forces, were forced to live beside rivers, under bridges and in the streets.

In the face of the US-Duterte regime’s bungling, fascist and criminally neglectful response to the pandemic, mutual aid initiatives around the country catalyzed and continues to gather momentum, a movement very similar to the socialist spirit of giving what one can and taking what one only needs. The community pantries, borne out of goodness and sensitivity of common citizens to the plight of the poor, sent the howling dogs of the Duterte regime into a red-tagging frenzy. The backlash was swift; the masses defended the mutual aid initiatives and further exposed the Duterte regime’s ineptitude and insensitivity.

Only by sheer resourcefulness, of the poor being kind to fellow poor, and through collective action did the masses of the region survive last year’s immediate economic fallout due to the pandemic. They are well aware that the worst and lingering effects are still underway, especially since the US-Duterte regime still keeps to its militarist and unscientific approach to the dire situation.

Yet even in the face of the US-Duterte regime’s counter-revolution and terrorism against the Filipino people, revolutionary forces in Southern Mindanao have much cause for celebration in that the national democratic revolution continues to burn steady and bright, a red emblem against oppression and exploitation that lights the way to our socialist future. Guided by the Communist Party of the Philippines and valiantly defended by the New People’s Army, the revolutionary masses resist wave upon wave of fascist reactionary attacks and gather momentum to turn the tide in favor of the people’s war.

Red fighters in all guerilla fronts in Southern Mindanao continue to be the masses’ unyielding protectors, foiling concentrated and sustained enemy attacks and mastering guerilla warfare to take initiative and rendering the AFP’s massively expensive focused military operations futile and a waste of taxpayers’ money. In many areas, and even in those with enemy presence, NPA units are able to carry out production campaigns, assist the masses in their farms, settle disputes, even help Lumad and peasant children in their blended learning. In turn, the Lumad and peasant masses of the region continue to embrace and support them, remaining to be the Red army’s bottomless well of recruits, circumventing combat military operations, checkpoints and blockades to guarantee the NPA’s material support and carry out creative forms of resistance whenever and wherever they can.

We distinctly commend the Lumad of Mindanao and all other indigenous tribes in the country in their strength and perseverance in the historic struggle for self-determination and defense of ancestral land and the environment. During the surge of the pandemic, they struggled not only against the US-Duterte regime’s criminal neglect but against an intensified virtual genocide never before seen since the dark days of the first dictatorship. They continue to bravely fight a deeply-bigoted regime and its counterinsurgency machinery that never lets up in waging against the Lumad, their children, their Lumad schools, their communities and even nitpicking on the very name “Lumad” that gave them a potent collective power to assert their democratic and human rights. Their struggle against Duterte’s Executive Order 130, which lifts the ban on new mining permits, and House Bill 7501, which when enacted will force the Lumad to surrender their right to their ancestral land in Pantaron mountain range, must be popularized and supported.

We urge all revolutionary forces to lead the masses in the region to continue to unmask and resolutely fight the regime’s counter-revolution and terrorism against civilians, especially NTF-ELCAC’s designs in Southern Mindanao under the Barangay Development Plan, which in Davao City alone has earmarked P4.3 billion surely to be used for next year’s reactionary elections. The NDFP’s 12-Point Program must instead be popularized as the best and only alternative to the BDP and other such graft-laden palliative projects that undermines the masses’ clamor for genuine land reform and national industrialization.

Being the trademark of a genuine united front, revolutionary forces must always advance armed struggle, defend its primacy and urgency and provide material and other forms of support to the NPA, the genuine army of the Filipino people. We must maintain the robust and vibrant character of the NPA with more youth joining its ranks and wield its class bias, revolutionary wisdom and temperance by ensuring that it is firmly rooted in the masses and their interests. The Red army’s class bias emanates from it being a peasant army that advances agrarian revolution to mobilize the overwhelming majority for the people’s war.

This primacy of revolutionary armed resistance is made more meaningful as we look back 500 years ago when Datu Lapulapu raised his weapon to strike down against the first colonial aggression in our shores. The Filipino people’s present national struggle against Chinese military aggression in our waters in the West Philippine Sea must take inspiration from the historic moment of the Battle of Mactan, as we call on all nationalist politicians to stand decisively on the side of the Filipino people and our sovereign interest. They must disabuse themselves of the fallacy that Duterte can only be made to answer in the reactionary elections, as the masses are clamoring to hold him accountable here and now. The cowardly traitor Duterte must be hounded incessantly for his treachery in gaslighting the people in believing Filipinos are helpless in the face of China’s military and economic aggression.

After more than a decade of revolutionary struggle, the Filipino people have collectively built a formidable united front that defends their democratic interests, resists and overcomes reactionary counter-revolution and continues to strengthen itself by humbly and conscientiously learning from and rectifying its errors. It is in this spirit that all revolutionary forces, especially in Southern Mindanao, remains steadfast and #DiPagagapi.