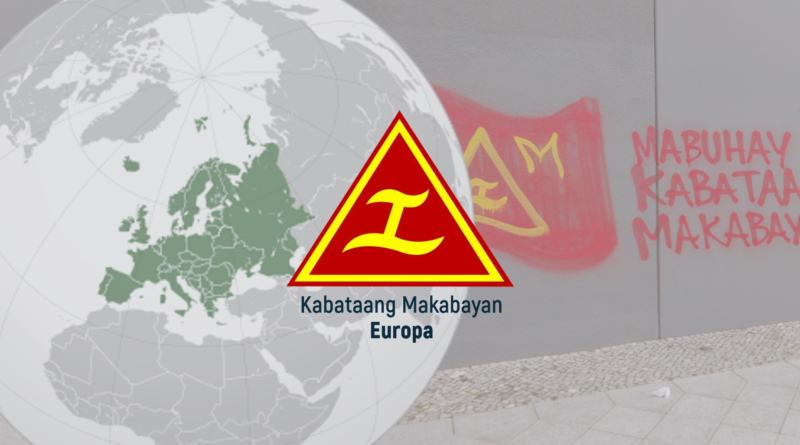 Amidst the social turmoil brought about by the pandemic and the exacerbating attacks of the fascist US-Duterte regime against the progressive and revolutionary forces in the Philippines and abroad, the People’s War in our motherland is aflame! Whether abroad or back home, the Filipino people and the peace-loving citizens of the Western countries show their support, love, and respect for the New People’s Army. For over five decades, the NPA stands in defense of the Filipino people and the country’s national sovereignty. It is already etched in history as one of the longest-running people’s revolution in the world.

As young Filipinos abroad, we are in the most favorable position to gain critical analyses of the concrete condition of the Philippine society and the impact of imperialism, feudalism, and bureaucrat capitalism to the Filipino migrants. While indeed we live in far more decent homes, eat far more decent meals, receive far more decent opportunities, the wide disparity between our host country and motherland has open our eyes to the just necessity of having a New People’s Army under the leadership of the Communist Party of the Philippines.

We bear witness to the ineptitude of the governments and their overseas representation, in particular, the Philippine government. The embassies and consulates abandon the Filipino migrant workers – with no compensation or aid to the undocumented and the unemployed, they leave our kababayans to look after one another. Rather than providing solutions, they go after the progressive forces who protest against their abandonment and inutility. The activists and revolutionary forces in Europe were harassed and put under surveillance by the embassies and directly attacked by the NTF-ELCAC. Recently, Facebook pages of the Philippine National Police (PNP) and the Armed Forces of the Philippines (AFP) intelligence usually based in France, Germany, and Italy were seen. They conduct seminars, teachings against the people’s national democratic movement and meetings. In London, the progressive organizations reported that comics and brochures against progressive forces and communism were left at the doorsteps of the embassy. It looks like they have unlimited resources for their unsuccessful anti-people operations but none to support the Filipino people.

The wide-range unemployment in the Philippines continues to contribute to the burden of the Overseas Filipino Workers. The OFWs are left alone to provide for their families. The quarantine restrictions add to the frustration, depression, and stress of the migrants. Deprived of their only relaxation and being with their families back home.

Abusing the disruption of life’s normalcy due to the pandemic. The Duterte administration intensifies the difficulties of Filipino students and educators through the blended learning system, distance learning, and even online learning. This newly devised system is not only unplanned and poorly executed but it does not correlate to the reality of Filipino families as a large number have no gadgets or are unable to afford electricity or internet. Expecting too much while giving so little is one of the common words that blurt out of the mouth of the reactionary government officials.

Thousands of Filipino scholars have left the country even before the pandemic, and thousands more will leave once travel restrictions are lifted. Our society champions the murdering of our dreams. Without the right opportunity to study and practice their field, the scholars opt to slave under foreign educational institutions. No matter how patriotic they are, no matter how much they love to dedicate their strength, knowledge, and talent to our motherland, our social condition forces them to be the new milking cows. As long as there are remittances, as long as there are dollars coming in, the government couldn’t care less if our country runs out of our skilled and brightest citizens.

And Duterte is Philippine’s very own Count Dracula. No amount of blood can quench his thirst and no pile of bodies can satiate his hunger for relentless killings. What the swamp of crocodiles around his castle is to Count Dracula, the AFP-PNP and NTF-ELCAC surrounding Malacañang fortress is to Duterte. His agenda to pulverize the revolutionary movement through black propaganda, fake surrenders, and even rampant brutal killings, are failing. After all, the people and their organizations such as Kabataang Makabayan–Europa and COMPATRIOTS – Europe stand firm. Duterte makes it easy for the revolutionary forces to popularize the program of the National Democratic Front. The relevance of the teachings of Karl Marx, Friedrich Engels, Vladimir Lenin, and Mao Zedong is easier to grasp than ever before–the system of monopoly capitalism is rotten to its core, and anything rotten is bound to crumble.

Duterte could try to crush the revolutionaries but all his efforts will be in vain. It is nature’s dialectics that there will be a struggle between the two existing classes until such time that the oppressing and exploiting classes shall be defeated and eradicated and a classless society shall exist. The mass murders, mass arrests, raids, red-tagging and terrorist-tagging will only speed up the revolutionary victory of the Filipino people. In the past months, we witnessed the merciless and brutal murders of innocent people by the Duterte government. As recently as Sunday, March 28, Ka Dandy Miguel of Pagkakaisa ng Manggagawa ng Timog Katagalugan (PAMANTIK–KMU) was killed by this regime. The masses call on the revolutionary army to give justice to the victims of the violent killings and human rights violations by the Duterte regime. To those who can join–Duterte can only be certain that they will join the armed revolution in defense of their lives and communities.

The Kabataang Makabayan–Europa salutes the New People’s Army on its 52nd anniversary. We cherish and take pride in our people’s army as the first and last defense of the Filipino masses. While the high-ranking officials of the reactionary state forces sit comfortably behind their swivel chairs, receiving a salary of thousands simply by commanding their lower ranks wreak terror among the people and to give their lives to a violent war against the people; the commanders and officers of the NPA are in the forefront of the war, leading their armies, facing death head-on while assuring the safety of their fighters. All the while committed to serving the people through medical missions, literacy and numeracy programs, helping in the household chores, and production in farmlands.

In truth, the government of Duterte fears the NPA. They master the art of guerrilla warfare. Their only compensation is the safety and wellbeing of the Filipino people. It is the love and support of the masses that stand as the People’s Army’s shield and inspiration against the enemy. No amount of advanced weaponry and military intelligence will ever defeat them. Why else would this regime resort to assaulting the non-combatants and activists in the urban areas, accusing them of being NPA and armed to the teeth?

As young revolutionaries abroad, it is our utmost duty to spread the revolutionary ideas and principles amongst our fellow Filipinos and youth in our respective host countries.

Our generation may not live to see total victory, but rest assured that we have contributed to its realization.

Amid the uncertainty, lurking fear, and even comfort brought by our lives here in Europe we must decide to take the highest form of struggle and join our kababayans in the countryside. The semi-colonial and semi-feudal system has taken away everything from us. Our right to live in our motherland, our right to education and living wages, even our identity–to struggle is all that is left for us. Be not afraid to take the difficult path to liberation. Be not afraid of difficulties, sufferings, and challenges. Let us not be restricted by the comfort of our rooms, computers, or phones. And whenever fear visits us, let us remember that only by being selfless can we become fearless. Draw inspiration from the People’s Army and the masses.

On the 52nd anniversary of the New People’s Army, Kabataang Makabayan–Europa vows that the young revolutionary forces abroad will go back home to live with the workers and peasants. This government forced us to leave in millions—and we shall soon return to join the New People’s Army. We, the youth in Europe knows that peace will only be achieved through a just war led by the Communist Party of the Philippines.