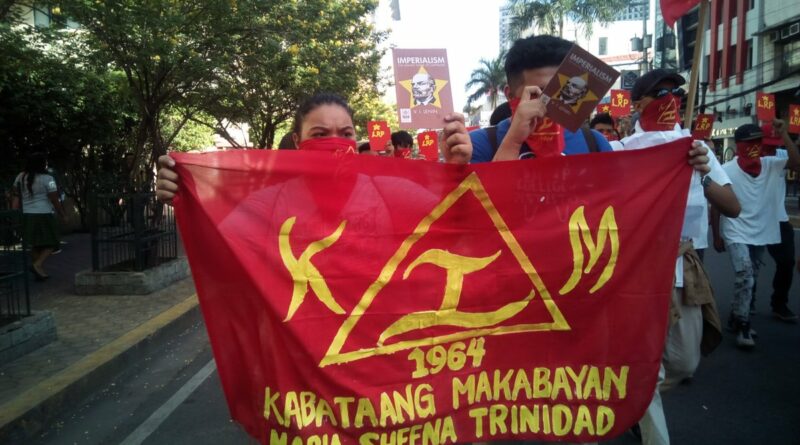 Kabataang Makabayan sends its warmest revolutionary greetings to the National Democratic Front of the Philippines (NDFP), along with all its allied organizations, celebrating today its 48th founding anniversary.

For almost five decades now, the NDFP as an alliance has united patriotic Filipino masses from all over the globe—and across multiple sectors—in the revolutionary aspiration to march the people’s war towards the people’s triumph.

Since its founding, it has served as a reminder of the scores of peasants, workers, national minority, Moro, semiproletariat, youth, and all others who are unyielding in their collective desire for a future that is free from class struggle, oppression, and exploitation. It has been a resilient force in the comprehensive forward strides of the national democratic revolution.

Kabataang Makabayan, as one of NDFP’s 18 allied organizations, greets this day with revolutionary fervor that surmounts even the most difficult hurdles and most grueling sacrifices in its history of determined struggle for the masses’ genuine liberation. The continuous growth—both in strength and in numbers—of these revolutionary organizations is a testament to the people’s equally growing vigor and militancy.

Facing a tyrant as vile, corrupt, and atrocious as Duterte, the obstacles rise steeper for all patriotic and revolutionary masses. Yet, the people are resolute now more than ever.

The Duterte regime should be held accountable for all the losses of life due to both its failed Covid-19 response and its insatiable corruption even amid the worst economic crisis the Filipino masses have seen in recent history. From deaths in hospital emergency rooms and waiting areas—to deaths in lines for cash and food aid that the government failed to provide—Duterte and his cohorts are the only ones to blame.

Duterte’s zeal in persecuting mass-based organizations using his National Task Force to End Local Communist Armed Conflict (NTF-ELCAC) shows how terrified he is of the people’s collective rage and discontent. He would immediately pour oceans-worth of his police and military personnel at the slightest whiff of a people’s initiative or protest, but could not spare even a handful of his uniformed goons to protect the country’s sovereignty from plunderers and imperialist masters like China and the US.

Indeed, Duterte’s intensifying fascist terror in both urban areas and the countryside merely exposes further the decaying state of his regime.

Kabataang Makabayan receives and accepts the Communist Party of the Philippines’ (CPP) instruction to all NDFP allied forces: to denounce Duterte as a national traitor for selling out the country to Chinese imperialists, to mobilize to assert Filipino rights on sovereign seas, to build the broadest united front against the Duterte regime, and to continue cultivating revolutionary determination among the Filipino youth.

Kabataang Makabayan vows to further consolidate its membership in all fronts, regions, provinces, cities, and communities; and to readily offer support for both Red Fighters in the countryside, and those individuals whose lives are threatened by the reactionary state in urban areas.

This 48th year of the NDFP, Kabataang Makabayan enjoins all democratic youth and masses to decisively take what the ruling classes have long owed: political power back in the hands of the its true possessor—the people!

Struggle for the Filipino masses’ democratic rights and interests!

Long live the National Democratic Front of the Philippines!